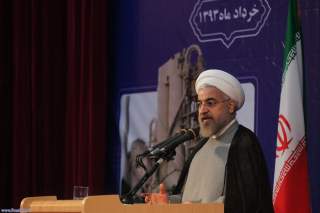 Alarm about the advance in Iraq by the group known as the Islamic State of Iraq and Syria (ISIS) has led even as inveterate a hawk as Lindsey Graham to see some advantage in cooperating with Iran. The United States and Iran may indeed seem like the ultimate in strange bedfellows, but that is only because of rigid thinking that divides the world into allies and adversaries and rejects having anything to do with the adversaries. If those who subscribe to this Manichaean view would let go of it, they would see that the United States and Iran have numerous parallel interests, and America’s opportunities to advance its own interests through cooperation with Tehran go well beyond the current crisis in Iraq.

In Iraq itself, the convergence of American and Iranian interests goes beyond just stopping ISIS. Iranian objectives in Iraq are defined by the experience of Saddam Hussein launching the Iran-Iraq War, an eight-year-long conflict in which hundreds of thousands of Iranians died. Iran never wants to see an aggressive Iraq again, and neither should we. While Tehran might prefer an Iraq too weak to start another war, it does not want unending instability in its neighbor to the west. And while the Iranians are glad that their Shiite co-religionists are no longer subject to oppressive Sunni rule, they are smart enough to realize that Prime Minister Nouri al-Maliki's narrow and increasingly authoritarian manner of governing is a recipe for the sort of Sunni extremism and unrest we see today. The best way for the United States and Iran to advance their shared interests in Iraq is to coordinate their messages to Maliki about political change being necessary to achieve anything approaching stability. There is no evidence, and no plausibility, behind the belief in parts of Washington that Iran wants to help al-Maliki turn this crisis into an all-out Sunni-Shiite war.

In Iran's neighbor to the east, the United States already has experience in cooperating with Iran to bring about political change. Following the ouster of the Taliban from power in late 2001, U.S. and Iranian diplomats worked effectively together to forge a new political order in Afghanistan that would be presided over by Hamid Karzai. This experience could have led to expanded cooperation in other areas—as the Iranian government of the reformist president Mohammad Khatami surely hoped and probably expected. But then the administration of George W. Bush slammed a door in Iran's face by declaring it to be part of an Axis of Evil.

The basis for fruitful U.S.-Iranian cooperation on Afghanistan continues today, as Karzai gives way to a successor and the U.S. troop presence winds down. Both the United States and Iran want a stable Afghanistan. Both want a broadly based system of governance that is not controlled only by Sunni Pashtuns and in which all ethnic and sectarian groups have a role. Iran also has a strong interest in getting the Afghan narcotics trade under control, given a major addiction problem among its own citizens.

To the south of Iran, security in the Persian Gulf is a subject in which Iran and the United States, in cooperation with the neighboring Arab countries, are the most important players. They are the two countries that most need to work together to ensure that incidents at sea and other possible misunderstandings do not escalate out of control. Both countries have an interest in not letting warfare endanger the oil trade.

Even where parallel interests are less apparent, such as with the civil war in Syria, interaction between Iran and the United States is not a zero-sum game. The relationship between Iran and the Assad regime has always been a marriage of convenience and not of love. The Iranians probably are open to political changes that would have a chance of concluding the war—indefinite continuation of which is not in the interest of either Iran or the United States.

The United States and Iran have wisely concentrated over the past year on negotiating an agreement on Iran's nuclear program, believing that premature broadening of the bilateral agenda would make conclusion of a nuclear deal even more complicated than it already is. Cooperation on other matters would have to wait. The security crisis in Iraq has compressed that timetable. Completing a nuclear agreement—and conscientiously implementing it, including the rolling back of U.S. sanctions on Iran—is more than ever important not only in its own right, but in opening the way for other fruitful U.S.-Iranian cooperation. A nuclear deal would impart momentum and confidence necessary to overcome many years of estrangement.

Even with a nuclear deal, Iran and the United States will regard each other more as rivals than as friends or allies. There still will be divergent interests along with parallel ones—as there are in any bilateral relationship, whether with an ally or an adversary. To cooperate constructively based on the parallel ones is not a gift to Iran; it is an unshackling of U.S. diplomacy that will facilitate the advance of America's own interests.