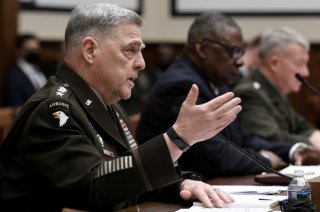 Recent hearings on Afghanistan before the Senate and House armed services committees were long on efforts to score political points and short on edification of the public about what happened in Afghanistan and how policy on such problems gets formulated. Lost among the efforts to land partisan haymakers was the distinction between the ugly denouement in August and issues raised by the entire twenty-year military expedition. The events in August dominated headlines, but the larger issues of the war as a whole—the costs of which have included thousands of U.S. military and contractor deaths and $2.3 trillion in direct expenditures, with future indirect costs such as medical care for veterans sure to raise that bill substantially—are ultimately more important and worthy of congressional scrutiny.

What should have been a headline item but wasn’t was the question of whether—especially given the ultimate futility of the expedition as demonstrated by the collapse of Afghan security forces—keeping U.S. troops in Afghanistan any longer could have made any difference. Also not adequately addressed was the question of whether, given that underlying fragility, it was inevitable that a U.S. withdrawal, whenever it was completed, would be followed by an ugly collapse.

Lost as well among the efforts to score points was the impossibility of prophesying a specific turn of events, such as those in August, that did not reflect anyone’s plan but instead involved the complex and unpredictable interaction of fears and other emotions of thousands of people. Secretary of Defense Lloyd Austin has incurred criticism for listing, as he did at the Senate hearing, factors involved in the August unraveling that the United States did not fully comprehend and that critics thought the U.S. military should have been well aware of, such as the local deals reached in many provinces between Taliban and government commanders. But Austin spoke realistically when he said, “we did not anticipate the snowball effect caused by the deals that the Taliban commanders struck with local leaders.” The deals themselves may have been knowable. What was not knowable was the snowball effect—part of that complex interaction of the emotions of many different individuals.

These deficiencies in public discussion of the war in Afghanistan have come up before, but what was the headline item in most press coverage of the hearings was the advice that the military establishment, including Austin and Chairman of the Joint Chiefs of Staff General Mark Milley, had given to President Joe Biden about whether U.S. troops in Afghanistan should have left or stayed. Republican committee members played up the idea that Biden had not followed that advice. This play is seen as politically profitable because of a widespread presumption that in anything involving war or military operations, deference should be paid to the professional military.

Georges Clemenceau’s famous remark that “war is too serious a matter to entrust to military men”—usually paraphrased as “war is too important to be left to the generals”—fails to capture fully what is wrong with that presumption. It is not so much an issue of seriousness or importance, but rather of the different roles and responsibilities of different officials, military and civilian. Military leaders must give their best advice about what is needed to accomplish their military mission as they understand it. That is only a fraction of the considerations that ought to be part of a policy decision, even a decision about war.

What goes for military advice from the generals goes as well for other government elements providing advice from the different perspectives that accompany different responsibilities. The State Department, for example, needs to give the best possible advice about diplomatic repercussions of wars and other foreign endeavors. But important though those repercussions may be, they still constitute only one of the considerations that ought to enter into a president’s decision-making. The president’s political advisers also have a legitimate role in assessing whether there exists sufficient public support for a foreign endeavor. We should not expect a president to fall in line automatically behind what their political advisers may say, and we should not expect that either with what the diplomats or the generals say.

In a normal and healthy policymaking process, presidential decisions thus often will not conform with any one piece of advice from below—even from generals, and even concerning a war. Hats off to Milley for making that point in the hearings by saying about his own advice, “Decision makers are not required, in any manner, shape or form, to follow that advice.”