America Is Wearing Out Its Welcome In Iraq 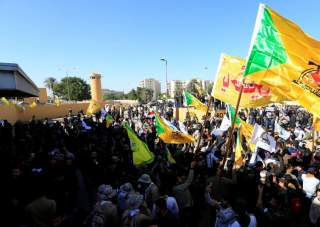 The scene in the Green Zone in Baghdad easily evokes memories of Tehran forty years ago. A U.S. embassy in the Persian Gulf region is under siege by an angry mob. The protestors, predominantly young, break through the outer walls of the compound as U.S. diplomats take refuge in a safe room. President Donald Trump implicitly extends the parallel by reacting in the narrowly anti-Iran terms that have defined his policies in this part of the world. “Iran is orchestrating an attack on the U.S. Embassy in Iraq,” Trump tweeted from Mar-a-Lago. “To those many millions of people in Iraq who want freedom and who don't want to be dominated and controlled by Iran, this is your time!"

But a closer look at what has been happening in Iraq suggests that genuine anger had much more to do with events than any orchestration did. The protestors who smashed their way into the embassy compound did so in defiance of appeals from leaders armed with loudspeakers. And the popular anger displayed at the embassy was also quite visible elsewhere in Iraq. If there is a parallel with Tehran in 1979, it is to be found primarily in a U.S. failure to anticipate and understand the nature of the anti-U.S. anger so much in evidence.

The newest outburst in Baghdad is in response to U.S. airstrikes Sunday on facilities in Iraq of the Kataib Hezbollah militia, which killed at least twenty-five and wounded at least fifty-five more. The airstrikes were billed as retaliation for a rocket fired two days earlier at an Iraqi naval base that killed an American civilian contractor and wounded “several” other Iraqi and U.S. personnel. Iraqis noticed the obvious disproportionality between the U.S. airstrikes and what they were retaliating for, and this disproportionality was part of what underlay the angry popular response. Another part was the fact that a foreign power was taking it on itself to conduct a military attack inside Iraq against Iraqi citizens.

The senior Shia cleric in Iraq, Grand Ayatollah Ali al-Sistani, was reflecting the sentiments of many Iraqis when he condemned what he called “atrocious aggression” by the United States and violation of Iraqi sovereignty "under the pretext of responding to some illegal practices by some sides." Sistani said that "only Iraqi authorities are entitled to deal with these practices and take necessary measures to prevent them."

Iraqi prime minister Adel Abdul Mahdi condemned the U.S. attack as “an unacceptable vicious assault that will have dangerous consequences.” Iraq’s National Security Council stated that it would have to reconsider its relationship with the U.S.-led coalition working against the Islamic State (ISIS) in Iraq.

Before the events of the past few days, recurrent popular protests in Iraq had acquired an anti-Iran tinge. The Trump administration may have interpreted this as Iraqis finally deciding to go all in with the administration’s own nothing-but-hostility posture toward Iran that has been the basis of its “maximum pressure” campaign against Iran. If so, this interpretation was mistaken. Most Iraqis do not want endless confrontation with Iran and a risk of once again suffering, as they did in the 1980s, from open conflict with Iran. Most Iraqis are dissatisfied with the performance of their own government. Given that Iran is the most influential foreign power in Iraq today, it became an auxiliary target of the popular dissatisfaction with the Iraqi regime. If the United States had instead been the most influential foreign power in Iraq today, it would have been that auxiliary target.

The U.S. knack for counterproductive military actions in Iraq continues. The war that the Bush administration launched in 2003 provided the biggest single boost to Iranian influence in Iraq, or for that matter to Iranian influence in the Persian Gulf region generally. Now this week’s U.S. airstrikes have converted what had been a story of popular protests with an anti-Iran tinge into a story of strongly anti-U.S. protests.

If there has been Iranian orchestration behind any of this—including the rocket attack on the Iraqi naval base last week—it would have been a calculated attempt to provoke just the sort of unpopular U.S. response that in fact occurred, thereby taking the focus of angry Iraqi citizens away from Iran and redirecting it toward the United States.

U.S. military personnel are in Iraq supposedly on an anti-ISIS mission. Under the Trump administration, there appears to have been mission creep, in Iraq as well as Syria, in which somehow confronting Iran has become part of a new mission. That mission has never been justified. No one has explained exactly how the current state of Iraqi-Iranian relations threatens U.S. interests—beyond any threat to the very same U.S. military personnel in Iraq, which brings circular reasoning into play. Seemingly forgotten among all this is how Iran, and the Iraqi elements it supports, also have been performing an anti-ISIS mission.

The United States would serve its own interests by letting that mission be performed by the locals best in position to perform it, and by moving toward a withdrawal of its forces from Iraq. Let someone else worry about inflaming popular sentiment through perceived violations of sovereignty. Such a redirection of U.S. policy would take those troops out of harm’s way. It would reduce the risk of a U.S.-Iranian clash, benefiting nobody, on an Iraqi battlefield. And it would reduce the chance of anther U.S. embassy being overrun by an angry mob.