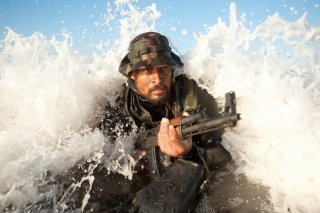 U.S. Special Operations Command and sub-maker Electric Boat have partnered up to develop a dry submersible mini-submarine designed to more safely and efficiently deliver Navy SEALs into hostile, high-threat areas beneath the surface of the ocean.

The 31-foot long underwater vehicle, called the User Operational Evaluation System 3, can carry as many as six people. It is currently being tested and developed through a three-year, $44 million U.S Special Operations Command, or SOCOM, firm-fixed price design, build and deliver contract with Groton, Conn.-based General Dynamics Electric Boat.

The pressure hull and motor of the User Operational Evaluation System 3, or UOES 3, have already been built and have undergone key tests, Electric Boat officials said.  Engineering plans call for the inclusion of a standard suite of submersible navigation systems, gyroscopes, sonar and obstacle avoidance technology, according to mission systems and business development officials with General Dynamics Electric Boat.

The idea with the dry submersible is to minimize risk and fatigue for special operations forces, such as SEALs, who are adept at quietly swimming into hostile areas to complete high-risk missions.

“Right now when we deploy SEALs they typically go in what’s called a wet boat – so they are in the ocean breathing through scuba gear. What the SEALs really want is something where they can get the guys to their objective dry, so they don’t have to endure this harsh water environment,” an Electric Boat official said.

While SEALs are known for their training and long-distance swimming abilities, a dry submersible could lessen mission- fatigue and reduce their exposure to harsh elements such as cold or icy water.  Therefore, the UOES 3 would seem to be of particular value in cold or stormy waters given that it would protect them from the elements.

It is not yet clear whether the 19-ton dry submersible will be launched from a submarine or from a surface ship, however those questions are now being explored, SOCOM and Electric Boat officials said.

The idea is to use UOES 3 progress as a “technology development” effort to prepare for what will become a more formal effort to build a dry semi-submersible for SEALs.

Some of the navigational technology includes a sonar Doppler velocity log which bounces a signal off the bottom of the ocean to help provide essential mission-relevant location information, an Electric Boat official added.

“After bouncing off the bottom, a signal comes back to an array which tells you how far you are moving,” he said.

One analyst said such a technology could bring great advantage to the SEALs.

“It is sensible that they would want to deploy in the stealthiest way available. It is something that fits with the traditional missions of the SEALs,” said Benjamin Friedman, research fellow in homeland defense and security studies, Cato Institute, a Washington-based D.C. think tank.