Anti-Iranism in the Trump Administration 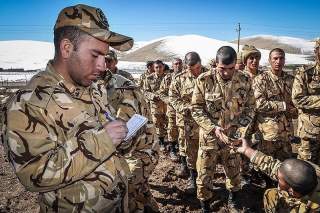 One of the most direct indications of Donald Trump’s failure, or refusal, to understand issues involving Iran is his tweeted declaration this week that the Iranians “should have been thankful for the terrible deal the U.S. made with them!”  It supposedly should be an occasion for Iranian thankfulness when Iran, subjected to economic punishment, gains only partial relief from that punishment through difficult negotiations in which it subjects itself to greater restrictions and more intrusive monitoring than any other state has willingly accepted for its nuclear program, even though some neighbors unfriendly to Iran not only have nuclear programs without those restrictions but also nuclear weapons.  No mention is made of Iran abiding by the agreement while most of the questions about compliance concern U.S. behavior and sanctions relief—which is why many Iranian hardliners argue that the nuclear agreement was a bad deal from Iran’s perspective.

Another illusionary Trump tweet asserts that Iran “was on its last legs”—which it certainly was not, having endured not only years of sanctions but also an extremely costly war begun by Iraq—until the U.S. “gave it a life-line in the form of the Iran deal: $150 billion”.  That $150 billion figure has long been discredited, with regard not only to the amount but also to how Trump and others who have thrown it about ignore how money that came into Iran’s hands (unfrozen overseas assets, and restitution for goods the United States never delivered) was always Iran’s money to begin with.

In explaining the timing of Trump’s declarations, one always has to look at what he is trying to divert attention from, and right now the uproar over the anti-Muslim travel ban is no doubt involved.  But the supposed trigger for these tweets and for an anti-Iran blast that Trump’s national security adviser delivered in the White House press room was an Iranian test of a ballistic missile.  Missiles have long been used by Iran-bashers as a red herring.  Missiles of various ranges are so much integrated into conventional armed forces, and missile proliferation has gone so far in the Middle East, that it does not make sense to single out an Iranian missile test as something that, in the hyperbolic language of security adviser Flynn, are among Iranian actions that “undermine security, prosperity, and stability throughout and beyond the Middle East and place American lives at risk.” If rivals of Iran can’t develop their own missiles, they buy them.  Saudi Arabia has bought them from China.  The United Arab Emirates has bought them from North Korea.  Short of the negotiation of a comprehensive regional missile disarmament pact, Iran will have missiles.

Former State Department intelligence officer Greg Thielmann highlights the most important points about this latest attempt to brew a tempest in the Iranian missile teapot.  A prohibition on Iranian missile activity incorporated in a United Nations Security Council resolution that was enacted during Barack Obama’s presidency was intended and used, just like other sanctions, as one more pressure point on Iran to induce it to negotiate restrictions on its nuclear program.  Accordingly, the later Security Council resolution enacted after negotiation of the nuclear agreement included only a hortatory clause “calling” on Iran to lay off the missile tests.  It is at best a stretch to call the latest test a “violation” of this resolution, and it certainly is not a violation of the nuclear agreement or any other agreement that Iran has signed.  As long as the nuclear agreement lives and Iran does not have nuclear weapons, Iranian ballistic missiles are of minor importance, and they do not pose a threat to U.S. interests (and this most recent test, by the way, was a failure).

Thielmann summarizes as follows the environment that Iranian defense planners face, and the reasons Iranian missiles are a symptom rather than a cause of conflict and weapons proliferation in the Middle East: “During the eight-year war following Iraq’s invasion, Iran was more the victim of than the source of ballistic missiles raining down death and destruction. In spite of its large missile arsenal, Iran has no long-range ballistic missiles; three of its regional neighbors do. Iran has no nuclear warheads for its missiles; two of its regional neighbors do. Iran does not have a large and modern air force as an alternative means of projecting force as do Saudi Arabia and Israel.”

The other bit of allegedly “destabilizing behavior” by Iran on which Flynn focused concerned the civil war in Yemen and most recently an attack by Houthi rebels on a Saudi warship.  Flynn disregarded how whatever aid Iran gives to the Houthis pales in comparison to the direct military intervention by the Saudis and Emiratis, which is responsible for most of the civilian casualties and suffering in this war.  It would be surprising if the Houthis, or any force on the opposite side of this conflict from the Saudis, did not try to go after Saudi forces at sea as well as on land.  Flynn also disregarded how the Houthis are not obedient clients of Iran, how in the past the Houthis have ignored Iranian advice urging restraint in their operations, and how there is no evidence whatever, at least not among what is publicly known, that Iran had anything to do the attack on the Saudi ship, let alone of posing a similar threat to U.S. assets in the area.  Nor was anything said about how the major U.S. terrorist concern in Yemen—Al Qaeda in the Arabian Peninsula—is on the anti-Houthi side in this war.  Nor anything about how former president and longtime U.S. counterterrorist partner Ali Abdullah Salih has been allied with the Houthis.

Flynn’s statement represents a taking sides in a local rivalry for no good reason, and in which the United States does not have a critical stake.  One of several harmful consequences of this kind of needless side-taking is to embolden those who side is taken to engage in more destructive behavior without being brought to account.  James Dorsey describes this way the destructive behavior that Riyadh is encouraged to take by the United States siding so unquestioningly with the Saudis in their rivalry with Iran: “A four-decade long, $100 billion global Saudi effort to box in, if not undermine, a post-1979 revolution Iranian system of government that it sees as an existential threat to the autocratic rule of the Al Saud family by funding ultra-conservative political and religious groups has contributed to the rise of supremacism, intolerance and anti-pluralism across the Muslim world and created potential breeding grounds of extremism.”

Several motivations are driving the Trump administration onto its collision course with Iran (including—as a subject for another time—Trump going all in with the right-wing government of Israel).  There is the general and enduring negative view of Iran among Americans; capitalizing on this is exploitation that Trump shares with many politicians of both parties.  There is the legacy of using opposition to the nuclear accord as a way of frustrating and opposing Barack Obama at every turn—something that Trump shares with other Republicans.

Somewhat more specific to Trump and his team is how confrontation with Iran is a way of putting the specific, named face of a nation-state onto the Islamophobia that pervades the Trump White House.  Other states would not serve that purpose as well, including the other six of the states subject to the total ban on inward travelers.  Iraq is supposed to be supported by the United States, Sudan is too peripheral for people to get worked up about, and the other four are beset by so much internal warfare that it would not be credible to portray them as an external threat.  Other Muslim nations, such as Saudi Arabia, are not convenient targets for other reasons, perhaps including Trump's business interests.

None of these are sound motivations as far as U.S. interests are concerned.  The unsound motivations get reinforced by personal animus toward Iran even among a more thoughtful official such as Secretary of Defense Mattis.  If anything is to influence the president in the opposite direction, it might have something to do with his friend Vladimir Putin getting him in line with Russia on the war in Syria, which would mean acting more in parallel with Iran than in conflict with it.

Meanwhile, Trump and Flynn leave themselves no apparent exit from an ever-escalating confrontation with Iran, no matter what the Iranians could reasonably do.