Asymmetry in Syria and the Russian Drawdown 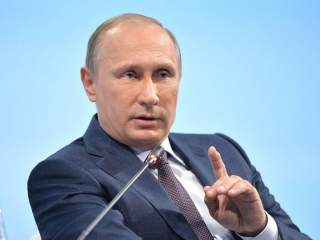 Whenever Russian president Vladimir Putin makes a significant move, several common reactions are routinely heard in American discussion. One such reaction, as Mark Katz notes, is to remark on how clever Putin supposedly is. Another common response is to express surprise. Many people expressed surprise when Russia militarily intervened last year in the conflict in Syria, and many of the same people are expressing surprise over the announced drawdown of Russian forces there. We don't know if the people inside the U.S. government whose business it is to follow and analyze such matters were surprised by either move, but one might question how consistent it is for anyone outside government to be surprised both by the move in and the move out.

The latest Russian move should not have been at all surprising. To the extent that it was, this is because of imputing to the Russians motives and thought processes that they do not exhibit, and neither do most other people. The announced withdrawal shows that Russian objectives in Syria were never unlimited or grandiose. The objectives had to do with such things as a temporary propping up of the Assad regime to prevent it from collapsing, and asserting a Russian role in helping to determine the future of Syria. The withdrawal also demonstrates that the Russians, just like most other people, consider costs and the risks of incurring more costs, along with considering benefits and objectives.

The Russian moves demonstrate in addition that Putin does not apply to the Syrian situation the kind of framework that many American critics of the Obama administration's policies apply, which is to equate activity and especially military activity with the degree to which a nation's interests are being upheld. A corollary to this framework is the belief that Russian military activity not only always advances Russian interests but also retards U.S. interests, and that a similar inverse relationship applies to U.S. military activity. Putin does not seem to have fallen into that zero-sum mindset, and there is no good reason for the rest of us to either.

The major problem that is Syria today concerns the war itself, much more than any particular political outcome of the war. It is the war itself that has given rise to expanding extremist problems such as ISIS and that involve the risk of instability spreading beyond Syria's borders. So a peaceful settlement of the conflict (at least the portions of it that do not directly involve ISIS or other terrorist groups) needs to be the top priority.

A precondition for peaceful settlement of such a conflict is a hurting stalemate in which no side believes it can win a military victory. The belligerents thus see compromise and peaceful settlement as the only alternative to indefinite, costly warfare. Here is where the Russian military intervention and its difference from anything the United States might do come into play. When the Russians first intervened, the Assad regime's position had become so shaky that it looked like it might fall, and this situation was reflected in adamant postures among rebels to the effect that they were determined to fight on until the regime was forcefully overthrown. Thanks in large part to the Russian intervention, that is no longer the situation. Opposition groups have been given reason to believe that a military victory for them is out of reach, and that a negotiated settlement involving the current regime is the only alternative to endless warfare. At the same time, the shoring up of the regime has stopped well short of giving the regime any capability to achieve military victory. The current Russian drawdown accentuates the point that Moscow is not going to help the Assad regime achieve any such capability.

In short, the entire sequence of Russian moves, including the initial intervention and the current reduction of forces, has helped to create and maintain the necessary hurting stalemate to make possible a negotiated settlement. By contrast, greater U.S. intervention into the kind of situation that existed last year only would have fed opposition recalcitrance about pushing toward a military outcome and would have pushed resolution of the conflict even further out of reach.

Other Russian behavior, including in the partial cessation of hostilities and the U.N.-mediated political negotiations, are consistent with the current Russian aim in Syria being a peaceful settlement. If Putin is so clever, we should build on the fruits of his cleverness to pursue a peaceful compromise, which would be in U.S., Russian, and Syrian interests alike.