The Bennett Visit: Netanyahu with a Nonpartisan Face 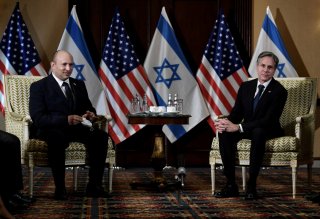 The Israeli coalition government led by Prime Minister Naftali Bennett—who visited Washington last week—represents only one change from its predecessor in dealing with the United States, and that change involves political tactics, not substance. Former Prime Minister Benjamin Netanyahu had so completely thrown Israel’s lot in with one of the two major U.S. political parties, and especially with former President Donald Trump, that Netanyahu was aptly described as an “Israeli Republican.” This type of partisanship seemed to be paying dividends for a while, as Trump’s administration showered Israel with almost every gift Netanyahu’s government could have hoped for, from moving the U.S. embassy to Jerusalem and promoting a “peace plan” that would cement subjugation of Palestinians, to unrelenting rejection of diplomacy with Iran. But even while Trump was still in office, some Israeli leaders could see the risk of putting so many of their eggs in one American political basket.

That risk became a more immediate concern with Trump’s defeat and the return of a Democrat to the White House. Although some of what Trump did has been politically difficult for Joe Biden to reverse, such as the embassy relocation and the erection of a “sanctions wall” against Iran, the Israeli concern about the narrowing of their American political base reflects other factors. Prime among these is the increasingly open disillusionment among American Jews, especially of a younger generation, with Israeli policies that they consider to be an affront to their progressive values—and these people are predominantly Democrats. There even has been some movement by U.S.-connected businesses to protest the occupation of Palestinian territory. Thus a prime objective of Bennett’s visit was to get beyond Netanyahu’s brand of blatant partisanship and to profess friendship with Americans of all political stripes.

But the professions of friendship are unaccompanied by any evidence of change in the Israeli policies and practices that are most incompatible with peace and stability in the Middle East and with U.S. interests. This was made plain in an interview that Bennett gave to the New York Times before he left for Washington. Regarding the conflict with the Palestinians, Bennett made clear that there will be continued construction of Israeli settlements in the occupied West Bank, no end to the suffocating blockade of the Gaza Strip, and no Palestinian state and no resolution of the conflict on his watch.

Bennett claimed to have a “new strategic vision” for policy toward Iran, but everything he said about Iran represented nothing new at all. Israeli policy will continue to reject constructive diplomacy with Iran and oppose any return to full compliance with the Joint Comprehensive Plan of Action, which restricted Iran’s nuclear program—even though a failure to return to the JCPOA, by freeing Iran to escalate its nuclear activities, is not in Israel’s own security interests. There evidently will be no ceasing of the sabotage and assassinations—the “grey-area stuff,” in Bennett’s words—about which Israel has reportedly given scant notice to the United States even though such operations undermine U.S. diplomacy and increase tensions in ways that endanger U.S. assets.

It is not surprising that the most recent change of government in Israel has brought about no change in policy on these important matters. The one thing that united all the participants in the current fragile coalition was a desire to oust Netanyahu from office. Any even halfway bold departures would break up the coalition. Bennett’s own party has explicitly said it would quit if Foreign Minister Yair Lapid, who heads a different party and was in some respects the principal constructor of the coalition, were to make any moves toward Palestinian statehood.

Not that there would be an impetus to make bold departures anyway. Many American hardliners like to say, in talking about Iran, that there has been no such thing as a moderate in any regime under the Islamic Republic and that any leaders who are labeled as such are really wolves in sheep’s clothing. That assertion is belied by the substantial policy differences that have resulted from, for example, a change in the Iranian presidency from Mahmoud Ahmadinejad to Hassan Rouhani. The line about there being no such thing as a moderate—or at least any who really matter in the making of national policy—would apply better to present-day Israeli politics. Distinguishing between the current Israeli government and the previous one is mostly a matter of far right versus extreme right.

President Biden should be able to see that Bennett’s charm offensive is all charm and no change in substance. But Biden will be tempted to respond positively anyway. As a Democrat, Biden will naturally welcome not having an Israeli prime minister who openly shills for the Republicans. Biden already had placed the Israeli-Palestinian conflict on his administration’s policy back burner. He will see the very adamancy that Bennett displays regarding the Palestinians and the occupied territories as confirming his previous judgment that there is little chance for his administration to make any progress on this problem during the next three and a half years. Portraying a smooth U.S.-Israeli relationship will be a political salve for Biden, who needs it more than ever because of the battering—however unfair—he is taking as a result of events in Afghanistan.

But Biden ought to think hard about the substance, and how glossing over important differences with an outward air of congeniality conflicts with values and principles that are important not only to his party but to him personally. Biden has made a big deal about promoting democracy worldwide and still intends to convene a Summit for Democracy later this year. Acquiescing in the continued Israeli treatment of Palestinians means that what he is promoting is democracy except for Palestine, undermining his larger principled call for democratization.

Biden’s administration also has said a lot about respect for the “rules-based international order.” Vice President Kamala Harris invoked that phrase in speaking critically about China during her trip to Southeast Asia. How much respect is being shown for that order by a state that conducts sabotage and assassinations against another sovereign state—one that has willingly placed its nuclear activities under the international nonproliferation regime (which cannot be said about the state conducting the sabotage and assassinations)?

National leaders have limited political capital and must carefully pick their fights. It thus is perhaps understandable that Biden would not display on matters involving Israel the same courage he has displayed on Afghanistan by refusing to kick the unproductive Afghan can down the road any longer, despite the political heat that was bound to result whenever the kicking stopped. But kicking something like the Israeli-Palestinian can down the road will mean more periodic flare-ups of an unresolved conflict—such as more wars in Gaza—some of which are apt to occur during the remainder of Biden’s term.