Coalition of the Unwilling: Why the United Arab Emirates Won't Let America Impact Its Relationship with Iran 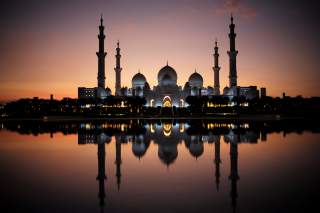 Mohammed bin Zayed Al Nahyan, crown prince of Abu Dhabi and the de facto chief executive of the United Arab Emirates (UAE), has determined that his principal regional policies have not been working well and require a fundamental redirection. He is withdrawing his country from participation in the war in Yemen and trying to back away from confrontation with Iran. The UAE’s shift underscores some respects in which current U.S. policy in the region also could use redirection.

The UAE is one of three countries to which the Trump administration in effect subcontracted its Middle East policy, the other two are Israel and Saudi Arabia. A subcontractor can greatly complicate a project, in foreign policy as in home remodeling, when he suddenly decides on his own to go in a different direction. The new direction is not necessarily bad and may represent an improvement, but in the meantime the owner of the project is left with the foreign-policy equivalent of an unfinished bathroom.

If the Trump administration does not go in the same new direction, then the United States will be even more isolated in the Middle East than it was before bin Zayed’s move. And of the two remaining partners, one cannot rule out similar shifts by Saudi Arabia’s crown prince and de facto ruler, Mohammed bin Salman (MbS). MbS cannot extract Saudi Arabia as easily from the Yemeni war, which is primarily his baby, as the UAE is extracting itself. But he faces some of the same setbacks and challenges, and now faces them without as much support as before from his friend bin Zayed. If MbS does overhaul Saudi policy, then a Trump administration that sticks to its current course would be doing so all alone except for its political partnership with the right-wing government of Israel, which will play the relationship for its own highly parochial reasons as it always does.

The lines of conflict in the Middle East have always been far more complicated than the picture the Trump administration has promoted, according to which the only thing that matters is unrelenting opposition to a supposedly Iranian-controlled Shia crescent. The war in Yemen vividly illustrates the complexity. The Houthi rebellion there began over local grievances involving insufficient central government attention to the interests of Yemenis in the northwest. Iran did not start the conflict and only began to see material aid to the Houthis—who have continued to make their own decisions, even when contrary to Iranian advice—as a cheap way to bleed and preoccupy the Saudis after MbS launched his big intervention in the war.

The complexity has recently gotten even greater with the outbreak of fighting between southern separatists whom the UAE has supported and forces allied with nominal president Abdrabbuh Mansour Hadi, who is Riyadh’s man even though he lives in exile in Saudi Arabia. The two sides in this fight are supposed to be coalition partners in fighting the Houthis. This new dimension to the mess has probably hastened bin Zayed’s inclination to extract the UAE from it.

Southern separatism has defined the lines of conflict in Yemen at least as much as Houthi grievances have, as reflected in the fact that not very many years ago the southerners had their own country before it merged with the other part of Yemen in 1990 to form a single Yemeni republic. A threat of international terrorism still is a factor in the south, in the form of a branch of Al Qaeda, against which the Houthis are staunch foes. The recent developments in Yemen make President Trump’s veto of a congressional resolution calling for an end to U.S. involvement in Saudi Arabia’s war there appear all the more ill-advised.

The UAE’s recent posture aimed at easing rather than exacerbating tensions with Iran underscores how much the Trump administration’s posture toward Iran is an obsession rather than a strategy. The Emiratis do not, any more than other denizens of the Gulf, want a war in the area, which could have highly destructive effects on their own economic and security interests. Instead, what they have wanted is for regional rival Iran to stay weakened, isolated, and despised. For the United States to unquestioningly take sides in such regional rivalries is not in U.S. interests, although it is in the UAE’s interests. What is not in the UAE’s interests, as bin Zayed evidently realized, is for the Emiratis to follow a U.S. path, staked out by a war-seeking John Bolton. The UAE knows that the national security advisor’s way forward has a high chance of ending in armed conflict.

The Trump administration should not assume that Gulf states, just because they are rivals of Iran to varying degrees, will be as obsessed with the country as the administration is. That would be a major mistake. Gulf rulers such as bin Zayed cannot afford to let obsessions become centerpieces of their foreign policy. They live in the neighborhood and the United States does not.

Thus, bin Zayed’s redirection of policy, which amounts to a realization that the neighborhood must be shared, even with rivals, makes good sense. Sure, bin Zayed has made mistakes, but he is a smart man and that is reflected in his ability and willingness to recognize mistakes and correct them. He realizes that the UAE’s economic and security interests are best protected through some degree of rapprochement with Iran. He realizes that the Trump administration’s current course of never-ending and always escalating confrontation cannot lead to anything good. The UAE will now be more in line with those Gulf states—Kuwait, Oman, and Qatar—whose postures had already reflected such realizations.