Could the Coronavirus Change the Role That Big Government Plays? 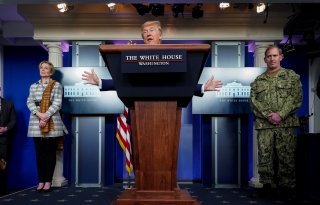 One wonders what the private reaction was in the White House, or in conservative political circles in the United States, to the video that British prime minister Boris Johnson recorded upon his release from the hospital while recovering from the coronavirus. Johnson’s message to his fellow citizens was largely a paean to the National Health Service (NHS), which he praised for saving his life and for being the key to his nation eventually overcoming the coronavirus.

The NHS, established by the post–World War II Labour government, became long ago a cherished institution among Britons generally.  Nonetheless, it was remarkable, especially to American ears, to hear the leader of the Conservative Party go out of his way to heap such praise on an institution that is the epitome of socialized medicine. The NHS is financed by taxpayers and has a huge workforce, including doctors and nurses, employed directly by the state.

Johnson has seemed to be a soulmate of President Donald Trump on various issues, including the issue that Johnson rode into 10 Downing Street—Brexit, with everything it implies regarding the restriction of immigration across international borders. But in his video, Johnson pointedly praised by name two nurses who were by his side when he was in intensive care and, as he put it, “things could have gone either way.” He just as pointedly mentioned that the two were immigrants who had come from outside Britain.

“I guess everyone is a Keynesian in a foxhole,” remarked the American economist Robert Lucas during the Great Recession a decade ago. Lucas’s own economic scholarship could hardly be described as Keynesian, but his comment acknowledged how when circumstances get really bad, the need for help, including the kinds of help that only governments can provide, takes precedence for most people over doctrine and ideology. The phenomenon applies not only to the sort of economic stimulation associated with Keynesianism but also to other forms of necessary government intervention.

The current public health and economic crisis is the kind of really bad circumstance that highlights certain vital things that only a government can do. This is true of the coronavirus pandemic itself when it comes to necessary measures such as lockdowns and the commandeering of essential medical resources.  It is true of the economic jolt from the lockdowns and associated fears, and the need for immediate financial relief amid skyrocketing unemployment. If that jolt leads, as it appears it will, to a more traditional recession with depressed demand, then it will be true as well of the needed stimulus measures that are classical Keynesianism.

The crisis highlights these truths, but it is not just during crises that the truths apply. The government has vital roles all the time, not just in a crisis. Recognition of those roles would imply taking certain actions when the country is not in crisis. Regarding public health, it would have meant heeding the warning from top government experts some three years ago that a pandemic such as the coronavirus would strike, and taking steps to make the nation much better prepared for it than it has in fact been. Regarding economic turmoil, it would have meant practicing the flip side of deficit-expanding economic stimulus during recessions by restoring government revenues and eliminating deficits during good times—which the United States has not done since the latter part of Bill Clinton’s administration.

Free markets do wonderful things, but some things important to the public interest they cannot do and only the government can. This fact is widely recognized with those parts of the public interest that involve military force. Nobody depends on the market to raise armies for national defense.  But the same fact does not get as widely recognized with other aspects of the public interest that just as legitimately are part of national security, including the protection of the public from infectious diseases. The profit motive is no better at fighting a viral pandemic—involving, among many other necessary measures, advance stockpiling of medical supplies—than it is at fighting an armed foreign aggressor.

A forward-looking question to ask amid the current crisis is: will the inevitable highlighting of the government’s necessary role in the crisis lead to greater recognition of the necessity of that role at other times?

The persistence of American anti-government ideology suggests that for the United States, the answer to that question is largely “no.” An illustration of that ideology that is especially relevant to the current public health emergency was the expenditure of enormous amounts of congressional time through dozens of Republican attempts to repeal the Affordable Care Act (ACA). Subsequent efforts by Republicans in power to sabotage the ACA, coupled with the absence of any alternative program to expand health insurance coverage to Americans, have intensified the distress for uninsured citizens hit by, or fearful of, the coronavirus.  The ACA is built around the existing U.S. system of private and employment-based health insurance and is nothing at all like Britain’s NHS, but the efforts to destroy it have been partly motivated by a refusal to recognize even a supportive government role in health care.

The same ideology is readily apparent even in emergency measures that have been taken so far in the current crisis.  Those measures give short shrift to beleaguered state and local governments and the postal service, both of which are parts of the public sector whose revenues have plummeted at the very time the services they provide are more needed than ever.

The prioritizing of ideology over effectiveness has been exemplified at the state level by South Dakota Gov. Kristi Noem, who responded to criticisms of her refusal to order lockdowns by lecturing people on the limited role of government, the responsibility of people to provide for their own safety, and her intention to base her decisions about the pandemic on her “commonsense conservative values.”  South Dakota has now become a coronavirus hot spot with one of the nation’s most rapid increases in new cases.

Much punditry at the moment is speculating on how the pandemic will reshape the international order, and on such questions as whether it will hasten China’s replacement of the United States as a global leader.  Those are important questions, but it also is worth asking where, coming out of the pandemic, the United States will appear on a global spectrum of recognition versus non-recognition of the vital role of the public sector in addressing major public problems. The answer—subject to change depending on the result of this November’s U.S. election—is that the United States will appear more isolated than ever at the extreme non-recognition end of that spectrum. It will be markedly different in that regard even from the Conservative-governed Britain led by Donald Trump’s friend Boris Johnson.

Johnson’s government had earlier considered letting the virus infect most of the population (or, as Trump put it in considering the same idea for the United States, to let the virus “wash over” the country) in the hope of building herd immunity.  The British discarded that approach—however consistent it was with a conservative, limit-the-government ideology—when realizing that it would overwhelm the health-care system and lead to huge numbers of avoidable deaths.

The lasting effects of Johnson’s experience on Johnson himself remain to be seen. But watching a still-haggard prime minister on that video, it is hard not to believe that this is a man who knows he was at the bottom of a deep foxhole and will always remember the implications of that predicament and what it took to get him out of it. Maybe it is only this kind of personal experience that can sweep aside ideological impediments to effectiveness.