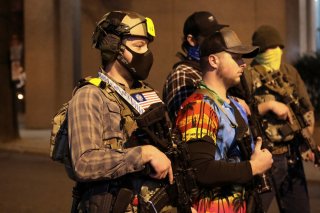 Last week the Biden administration released a National Strategy for Countering Domestic Terrorism, the first such U.S. document on that specific subject.  Like most “strategy” documents on other topics that any administration releases, it is less a true strategy that shapes operational decisions inside the government than it is a public statement of objectives and principles.  It nonetheless is a welcome official confirmation of the reality of where most terrorist threats against the United States come from today.

That reality differs from the common perception, which has prevailed in the two decades since the 9/11 attacks, that counterterrorism is mainly a matter of hunting down foreign jihadists.  Since 9/11, deaths inside the United States at the hands of foreign jihadist organizations have been almost nonexistent.  Where jihadism has been involved in attacks within the U.S., it has been in the minds of individual, mostly home-grown terrorists.  And even those attacks have been outnumbered by ones involving significantly different brands of extremism.

The strategy document recites some themes that were already familiar from discourse about countering foreign terrorism—such as that old favorite, that government agencies should share information with each other more freely.  It also offers some newer thoughts, such as the observation that by paying attention to domestic extremists’ transnational connections, some legal and investigative tools that apply only to foreign targets become available that could not otherwise be employed against domestic terrorists.

The document correctly identifies many of the inherent limitations and trade-offs involved in any effort to counter domestic terrorism.  In this regard, it is better at identifying the problems involved than it is at coming up with clever solutions to those problems.  For example, the document notes that the “availability of domestic terrorism-related recruitment material online is almost certain to persist at some level.”  All it can offer in response is that “we will pursue innovative ways to foster and cultivate digital literacy and related programs, including educational materials and interactive online resources such as skills–enhancing online games.”  It clearly is a stretch when online games are being looked to as a response to radicalizing misinformation and propaganda that nurture domestic terrorists.

The most significant section of the strategy document—and the one that identifies the most fundamental underlying problems that defy easily defined solutions—is on the fourth and final “pillar” of the strategy, which is labeled “Confront long-term contributors to domestic terrorism”.  As with foreign terrorism, the political, economic, and societal conditions that surround would-be domestic extremists ultimately determine more than anything else whether they take the drastic step of resorting to terrorist violence.  But in the domestic sphere, addressing these issues immediately gets into domestic politics where consensus is lacking.

Although the authors of the document bend over backward to remind people that terrorism is not the exclusive province of any one ideology or political persuasion, most domestic U.S. terrorism in recent decades has involved right-wing extremism.  Efforts on the right to play up the activities of Antifa or Black Lives Matter do not refute that statistical fact.  And recognition of such facts is essential for a well-informed approach to combatting domestic terrorism.  Consistent with those facts, the Intelligence Community assesses that “racially or ethnically motivated violent extremists” and “militia violent extremists” pose the most lethal threats, while singling out for mention the transnational connections of those extremists “who promote the superiority of the white race.”

Besides saying much about the need to combat racism, the strategy document speaks of such things as how the administration has tried to improve underlying conditions by working “to deliver immediate financial relief to millions of Americans, thus contributing to an equitable economic recovery that can counter the economic dislocation and even despair felt by many Americans.”  It is easy to see how the administration’s political opponents would dismiss such references as having more to do with Democratic economic agendas than with countering domestic terrorism.

But the document correctly takes a broader view of the underlying problem when it identifies as a priority, “enhancing faith in government and addressing the extreme polarization, fueled by a crisis of disinformation and misinformation often channeled through social media platforms, which can tear Americans apart and lead some to violence.”  The document states that this requires “accelerating work to contend with an information environment that challenges healthy democratic discourse,” including “finding ways to counter the influence and impact of dangerous conspiracy theories that can provide a gateway to terrorist violence.”  Needed are programs and policies “to foster civic engagement and inspire a shared commitment to American democracy.”

A blunter way of describing the problem is that a substantial portion of the American population, its perceptions contorted by disinformation and its loyalties blurred by partisan tribalism, does not share a commitment to American democracy.  Some subset of that portion of the population will resort to terrorism.  That’s what happened at the Capitol on January 6th.  Insofar as that event involved violence by non-state actors in pursuit of a political objective—in this case, the overturning of an election result—it was terrorism.

No matter how much counterterrorist work is done through interagency task forces, information sharing, and some of the other measures the new strategy document mentions, the problem of domestic terrorism will remain as long as this larger underlying problem of political attitudes and loyalties remains.  As long as it does, danger will persist not only to those individuals who fall victim to terrorist violence but also—as an even bigger problem—to American democracy itself.