Counterproductive Counterterrorism in Afghanistan and Yemen 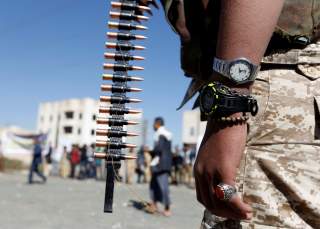 Fighting terrorism has been the most commonly invoked rationale for U.S. involvement in overseas military conflicts during the past two decades. But much of that involvement has sustained and strengthened, rather than weakened, international terrorism. Recent news from two places, Yemen and Afghanistan, illustrates one dimension of the problem.

The principal player in international terrorism with a role in Yemen is Al Qaeda in the Arabian Peninsula, or AQAP. This branch of Al Qaeda has come closer than any other since 9/11 to pulling off a successful high-casualty attack against U.S. targets. Within the current Yemeni civil war, AQAP operates on the side of the line dominated by the U.S.-backed coalition of Saudi Arabia and the United Arab Emirates. Supposedly that coalition has devoted some of its effort to attacking AQAP, rather than what it considers its main adversary, which is the Houthi force that holds much of northern and western Yemen. But a remarkably detailed piece of investigative reporting by a team of Associated Press journalists tells a different story.

The coalition has repeatedly claimed, over the past two years, local victories in ousting AQAP fighters from named villages and districts. But many of these departures involved no battles at all. Rather, they entailed what amounted to sweetheart deals with the AQAP detachment involved. Al Qaeda fighters were not only given safe passage out of a location but were permitted to keep all their weapons and equipment. They also kept whatever cash they had looted from the locality in question in addition to further cash payments from the coalition. There was more cordiality than combat. One local tribal leader who negotiated one of these deals on behalf of the coalition even hosted a farewell dinner for the departing AQAP men.

Many of the transplanted Al Qaeda fighters have wound up in the ranks of militias that are doing most of the fighting on behalf of the Saudis and Emiratis. This has included leaders as well as ordinary fighters. One prominent coalition-backed warlord is on the U.S. list of designated terrorists because of his ties to Al Qaeda. The process has furthered the radicalization of the side in the Yemeni civil war that the United States continues to support.

In the civil war in Afghanistan, the United States military has been involved—including in direct combat—for nearly seventeen years. Its principal opponent throughout this time has been the Taliban—the Pakistani-nurtured Islamist element that swept to power over most of the country in the mid-1990s, was ousted from most of its positions after the U.S. intervention, and since then has continued to wage an insurgency. The principal player in Afghanistan with an international terrorist dimension is someone much different: a branch of the so-called Islamic State or ISIS.

The Taliban has been a staunch and effective foe of ISIS—rather like how the Houthis have been a staunch adversary of AQAP in Yemen. Recently the Taliban inflicted a major defeat on ISIS in Jawzjan province in the north of the country. The defeat was the result of heavy fighting. No cash deals were involved.

American perceptions of the Taliban are stuck in history, and specifically in the pre-9/11 relationship it had with the Al Qaeda of Osama bin Laden. This was a marriage of convenience for the Taliban, who at the time valued bin Laden’s material support in the ongoing Afghan civil war. The Taliban have never been into international terrorism. They always have been narrowly focused on political power and the social order within Afghanistan. The terrorist activities of transnational actors who have used Afghan territory have been an unwelcome complication for the Taliban. The biggest setback they have ever suffered was a direct result of Al Qaeda’s terrorism in 2001.

Preventing terrorism was the rationale for the United States to intervene in Afghanistan, and it continues to be the most commonly invoked rationale for staying there. The rationale mistakenly treats Afghanistan as if it had some special quality as a haven for terrorists that other countries do not, as well as mistakenly treating physical havens as if they were essential for terrorist operations in a globalized age. Mistaken or not, an added irony is that a military intervention initiated in the name of counterterrorism continues seventeen years later as mostly a fight against a group that is itself fighting against real international terrorists.

The American war in Afghanistan continues largely because of inertia, the treatment of sunk costs as an investment, and mission creep that focuses on non-terrorist issues such as the Taliban’s subordination of women. Reports of preliminary talks between U.S. officials and the Taliban are encouraging. But peace diplomacy will have to work against all the reasons that the intervention continues. The argument will continue to be made that the regime in Kabul must first be shored up some more, even though those making the argument have no good answer to the question of why whatever shoring that occurs over the next few years will be any more effective than what has taken place during the previous seventeen.

In Yemen, the United States continues to support the disastrously destructive Saudi-Emirati intervention because it is obsessed Iran. This is an obsession that the Trump administration has taken to new extremes. Yemen is seen as a playing field for this game because the Houthis have received some Iranian support, even though they are not Iranian proxies and have ignored Iranian advice on important matters. The U.S. backing of the Saudi-Emirati assault continues in the name of pressuring “the number one state sponsor of terrorism,” to use a catchphrase habitually applied to Iran, without regard for how this policy is increasing, not decreasing, the potential for more terrorism emanating from Yemen.

Realists may disagree among themselves as to the priority to be given to countering terrorism. But they would agree that obsessions and mission creep are not sound bases for pursuing this or any other policy priority.

Image: A Houthi militant takes part in a parade held to mark 1000 days of the Saudi-led military intervention in the Yemeni conflict, in Sanaa, Yemen December 19, 2017. REUTERS/Khaled Abdullah