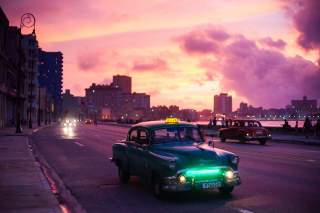 A week-long visit to Cuba reveals a tropical country of 11 million people that is stuck in a kind of time capsule.  The anachronistic aspects of the country are symbolized by the 1950s-era U.S.-made automobiles that cruise city streets—and the resourcefulness of Cubans is symbolized by whatever they do to keep those old cars running.

Also within the time capsule are long-obsolete ideas of Fidel Castro that continue to shape Cuba’s economy.  Salaries are meager and not linked to productivity.  People commonly work multiple jobs to get by.  Many well-educated professionals spend less time on their professions than on something else, such as driving a bus, that pays better.   Some basic consumer items are heavily subsidized but not in the necessary quantities.  A system of two different currencies, one convertible and the other not, adds to the jury-rigged quality of the economy.

Comparisons between Cuba and the United States provide some illustrations of the strengths and limitations of, on one hand, collective endeavors mounted through government and, on the other hand, reliance on free markets.  In making such comparisons, however, one must be aware of other factors in determining relative performance.  Transportation infrastructure, for example, is in bad shape in both countries, but for different reasons.  In the United States, it is largely because of anti-government sentiment that affects the allocation of resources to what is inherently a public endeavor that requires government.  In Cuba, where problems of transportation infrastructure include bone-jarring pavement even on major highways, the cause is simply not enough resources to allocate in the first place.

The most revealing contrasts involve not potholes but people, and the attitudes and energy that the systems in which they live inculcate.  In Cuba it is easy to find examples of unmotivated workers, in situations where one could say that some more market incentives could do a lot of good.  But in contrast there are the positive outlooks and abilities produced by Cuba’s comprehensive system of public education, which is one of the success stories of the revolution.

Cubans do not exhibit any widespread and unsettling discontent.  Maybe this is partly because they just don’t know of any better alternatives, with at least two generations having come of age since Castro took power.  But with much less inequality than in the United States, even the more ambitious and upwardly mobile Cubans define their aspirations in terms of what is realistically attainable through hard work in school and university, however different the end goal may be from the kind of wealth that many better educated Americans crave.  With most basic needs met, the most talented Cubans find satisfaction and self-realization in things such as arts and sports, both of which are areas of emphasis in the educational system.  The enthusiasm of young people participating in the performing arts is obvious and infectious.

Related to all this is a near absence of expectations for major political change, and of any appetite for the kind of political activism designed to produce such change.  In short, no counterrevolution is in sight, and not just because of the current regime’s use of its coercive power to ensure that it stays out of sight.  Cuba’s modern political history is a factor.  The nation achieved independence later than most other Latin American states, (and when it did get independence, it was with the U.S.-imposed, sovereignty-compromising Platt Amendment that went along with it) and has not had as much time to work through stages of political development as, say, Mexico.  Most Cuban presidents in the first half-century after Spanish rule ended were not commendable leaders, with Fulgencio Batista being the last of a corrupt and ineffective lot before Castro ousted him.

But the popular attitudes involving personal fulfillment are a factor as well.  Along with the instances of insufficient motivation it also is easy to find Cubans who throw themselves into their work with energy and commitment, whether the work is bartending or city planning.  On the Isle of Youth (which sees very few tourists), in the island’s only city, Nueva Gerona, is a beautiful pedestrian boulevard which makes creative use of the marble that is extracted from nearly quarries.  The park benches in the town are made of marble.  Someone with the drive and leadership ability that in other circumstances may have been applied to making a political revolution instead applied those talents to beautifying the city, even though he or she probably was paid only a pittance for doing so.

The external influences of globalization can greatly change attitudes and aspirations in any country, but for Cuba the biggest single external reality is the anti-globalization U.S. embargo.  With the embargo having been in effect for half a century and with it not leading to even the possibility of significant political change in Cuba, one can safely declare the embargo to be a complete and utter failure.  All it has done is to embarrass the United States each year with United Nations resolutions condemning it, in which every member of the General Assembly joins the condemnation except for the United States, Israel, and usually a couple of the Pacific micro-states.

If the embargo were to end—and this would be a major economic event for Cuba, given the size and significance of the colossus to the north—this would inevitably mean significant change in Cuban attitudes and, because of that, Cuban policies.  Whoever was ruling Cuba at the time would almost be forced to pull a Deng Xiaoping regarding modernization and freeing of the economy, because the ineffective anachronisms could not survive either the direct competition or the competition in the minds of Cubans who would see a new range of possibilities.

If significant political change were to come to Cuba in our time, this is the route it would take.  There are no guarantees, of course, and Castro’s heirs, like rulers in a lot of other countries, would look to the China model with the hope of loosening the economy while maintaining tight political control.  But it is too early to tell whether that sort of dichotomy between the economic and the political can endure.