The Documents Matter: Why Trump Is a Security Risk 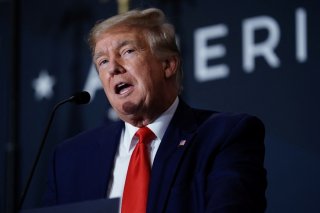 Responses by Donald Trump’s supporters to the recovery of the material that Trump illegally took to his Florida residence have thrown the concept of law and order to the wind and have endangered public servants doing their jobs. That is demonstrably bad, but focus for a moment on the documents themselves. More specifically—although Trump’s action, unlike the more responsible conduct of other former presidents, clearly violated the Presidential Records Act even if no classified material had been involved—consider the national security implications.

We now know, thanks to the release of a letter from the acting archivist of the United States to Trump’s lawyers, that the material that Trump retained illegally for a year before returning it to the government in January included more than 100 classified documents totaling more than 700 pages. Some of the documents were classified at the highest levels, reserved for the most sensitive national security materials. Then, after Trump’s lawyers lied to the government in asserting that this material was all there was, the FBI found and seized this month multiple boxloads of still more classified material from Trump’s residence. No exact count of that part of the stash has been made official, but press reporting suggests that the total number of classified documents that Trump carted off to Florida is more than 300, with the page count presumably some multiple of that.

In short, it is a huge amount of sensitive material relevant to U.S. national security. We, the public, still do not know details of the contents, and we should not expect to find out. Revelations that would impress on the public the sensitivity of the material would tend to defeat the purpose of classifying it in the first place.

But what already is publicly known, in terms of the amount of material and levels of classification—even allowing for some possible over-classification—warrants the conclusion that the mishandling of this material has posed serious dangers to national security. Risk to intelligence sources and methods is almost certainly involved. So is the risk to sensitive aspects of U.S. diplomacy. Compromise of the information and its acquisition by hostile powers could occur through either direct acquisition of improperly secured material or recruitment of people who have had access to it.

The damage is likely to be all the greater because Trump’s actions have impeded assessment of the damage. As the acting archivist’s letter indicates, the attempts of Trump’s lawyers to freeze any examination of the material inside the government, by making implausible claims of executive privilege, delayed by months the initiation of a damage assessment covering the first batch of recovered documents. Damage assessments are most effective in limiting further damage when performed as promptly as possible. Responses to such assessments can include evacuating human intelligence sources from areas where they may be in danger, or reconfiguring the use of technical collection systems.

On top of this is the indirect effect that Trump’s brazen disregard for rules on safeguarding national security material could have on the willingness of many lower ranking officials still in government to abide by those rules. The great majority of public servants with access to such material will continue to respect the rules. But it only takes one person to cause significant additional damage by deciding that he doesn’t need to be any more diligent in handling secrets than an ex-president has been.

Trump already showed while in office that he lacked respect for such rules, or indeed, respect for national security. It was just one more set of national interests that took second place to his highest priorities, which were himself, his ego, his pocketbook, and his thirst for revenge against anyone who crossed him. At least in the White House he had some “adults in the room” who could monitor his conduct and his access and try to limit damage. He doesn’t have those people in Florida.

What might Trump have done (or possibly already has done) with those documents? Boastful show-and-tell is probably the least damaging possibility, although any unauthorized disclosure of classified material carries risks. Another possibility is willful sabotage of a successor administration’s policies through selective leaks, in which the damage would come from both the compromise of classified information and the undermining of U.S. foreign policy.

It is in coming to the most nefarious and worrisome possibilities that one has to consider Trump’s character and history. If Trump had been an ordinary applicant for employment in one of the departments or agencies handling national security matters, he never would have been approved for a security clearance. Any security officer reviewing his file would have immediately seen red flags. These include a financial history of indebtedness and business bankruptcies, connections to a hostile power such as Russia, and dependence on that foreign power to achieve business objectives.

Trump’s conduct in government has confirmed what would have been the security officer’s decision to deny a clearance. This includes not only the disregard for rules and laws, the careless handling of classified information, and the willful obstruction of damage assessments, but also behavior that suggests more specifically that he has something to hide, especially in his relations with Russia. That there has been more to Trump’s relationship with the Russian regime than he ever has acknowledged is indicated by his secretive approach to meetings with Russian president Vladimir Putin, concealing contents from his own staff and other U.S. officials. After his first meeting with Putin, Trump confiscated his interpreter’s notes and ordered him not to disclose to anyone what he had heard. In other conversations with the Russian president, he used Putin’s interpreter, with no Americans present besides Trump himself. It is highly unusual for a U.S. president to shut out in this way his own staff and U.S. officials having responsibilities concerning the country in question.

Without any documents, Trump as an ex-president might not have been a very attractive target for a foreign regime or intelligence service. His disengagement from briefings, inattention to detail, and disregard for truth would mean that whatever he said from memory or off the top of his head might not have much value anyway. But with classified documents, he has something to sell. As a disgruntled former employee of the U.S. government, he further fits the profile of a security risk. And he probably still would like to build a Trump Tower in Moscow.

Now that the documents have been recovered, we shouldn’t have to worry about that anymore—or should we? Trump’s representatives already have lied once about whether he had any remaining documents, and there is no guarantee that the FBI was able to find everything. And Mar-a-Lago probably has copying machines.