Donald Trump Has Been a Failure on Iran 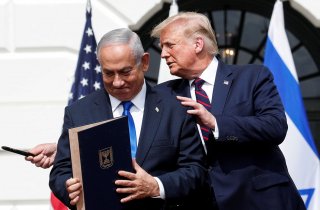 Given what originally drove Donald Trump’s policy on Iran, it is not surprising that the policy has gone badly and is ending badly. The policy was shaped not by any calculation about what would best advance the causes of nuclear nonproliferation, de-escalation of Middle East conflicts, or other U.S. interests. It was driven instead by Trump’s compulsion to do the opposite of whatever Barack Obama did. Obama’s leading foreign policy achievement was the diplomacy that led to the Joint Comprehensive Plan of Action (JCPOA), the multilateral agreement that closed all possible paths to an Iranian nuclear weapon. And so the JCPOA had to go.

Trump’s administration has moved beyond trashing the JCPOA and for the past two and a half years has waged unrestricted economic warfare against Iran. That is plenty of time for Trump’s policy of “maximum pressure” on Iran to show positive results if it ever were going to show any. The policy has instead failed on every front.

Far from getting any closer to a “better deal” on nuclear issues, Iran has expanded its nuclear activity to the point that it has stockpiled twelve times the amount of enriched uranium it had under the JCPOA limits and has started using more advanced centrifuges for further enrichment. Rather than curbing Iran’s “malign” activities in the region, the Trump policies have provoked Iran to lash out, especially by attacking other countries’ oil facilities—something Iran never had the incentive to do prior to the U.S. economic warfare and attempt to destroy Iran’s own oil trade. Instead of leading to more agreeable Iranian political leadership, Trump’s policies have discredited the more agreeable types and have strengthened the position of hardliners in Tehran.

Despite the failures, the administration is sticking, right to its own bitter end, to maximum pressure. It keeps trying to find more Iranians and Iranian institutions to sanction, even though the sanctions already have become so voluminous that they have passed the point where adding a few more to the pile would make any discernible difference.

This stubborn adherence to failure may have several, not mutually exclusive, explanations. One is simply an absence of any better ideas as long as rejection of the JCPOA remains the administration’s governing creed. Another is that Trump may actually believe the notion—which has been heard in various forms in the four decades since the Islamic Republic of Iran was established—that just a little more pressure exerted for a little longer will crush the will of the Iranians.

Yet another explanation is political appeal. No American politician has lost votes by being tough on Iran. More specifically, Trump sees unquestioning support for the Netanyahu government in Israel—which has its own reasons to retain Iran as a permanent regional bête noire and to reject all diplomacy with it—as a key part of Trump’s

own (in large part evangelical Christian) political base.

A more calculated motivation for the administration, and for others who have followed Benjamin Netanyahu’s program of promoting perpetual confrontation and hostility with Iran, is to build a “sanctions wall” so high that it will impede the Biden administration’s ability to return to diplomacy and to compliance with the JCPOA and United Nations Security Council Resolution 2231, which was the world body’s blessing of the JCPOA. The plethora of sanctions will indeed be a complication for the new administration. But the Trump people have been so blatant about the purpose of the “sanctions wall” that presumptive President-elect Joe Biden’s people ought to be able to expose and dismiss the subterfuge that sanctions labeled as being for terrorism or human-rights offenses have really been part of the effort to kill the nuclear agreement permanently.

Trump’s desperation in the twilight of his administration to do something new about Iran that he could bill, however mistakenly, as an accomplishment has led him to ask for military options for attacking Iran’s principal nuclear facility at Natanz. Trump’s subordinates reportedly talked him out of the idea, but that Trump would even consider such an act ought to chill even more spines than the New York Times reporting on the subject did chill. Here was a president, who was elected while talking about the need to end America’s forever wars, thinking about starting a new war with less than three months left in his term.

Any claim by Trump that an attack on Natanz accomplished something would rely on people forgetting, or not realizing in the first place, that it was Trump’s own policies that had led to Iran amassing enriched uranium far beyond what it was allowed under the JCPOA. The claim would be similar to the arsonist-as-firefighter tactic that Trump has used on other issues, in which he creates or escalates a crisis and then seeks credit for de-escalating it. The claim also would rely on people not realizing that an Iranian response to such an attack may well be to re-activate a clandestine program to build a nuclear weapon, much as Saddam Hussein’s regime did after Israel attacked an Iraqi nuclear reactor in 1981.

If Trump was thinking about possible conventional Iranian armed responses short of all-out war, then he may have figured that he could create more problems for Biden while not adding greatly to his own. Iran has not yet retaliated fully for the U.S. assassination in January of a major Iranian military and political figure, Maj. Gen. Qassim Suleimani. Iranian foreign minister Javad Zarif has said that “the book is not closed” on the assassination. If the Iranians still were going to do something more in response, one would expect them to do it while Trump is still in office. Trump thus might face an armed incident with Iran whether he attacks Natanz or not. And if he did hit Natanz in the closing days of his administration, most of the Iranian response to that attack would come on Biden’s watch.

Although Trump was dissuaded from an attack, he might rely on his friend Netanyahu to do the deed for him, with many of the same hoped-for consequences of torpedoing diplomacy with Tehran. This may be the calculation of Secretary of State Mike Pompeo, who reportedly was one of the dissuaders but who has been as much of an anti-Iran hawk as anyone. Pompeo’s current trip, in which he has subordinated any semblance of a just and coherent U.S. policy toward Palestine and the Levant to bolstering his own political standing with the evangelicals, also constitutes an implicit endorsement of the simultaneous and openly announced escalation of Israeli attacks on Iran-related targets in Syria.

Trump’s overall handling of the Iran issue has been one of the most conspicuous and damaging examples of subordinating U.S. interests on an important foreign policy topic to partisan and personal objectives. His handling of the subject also has been a major contributor to the increased isolation and decreased credibility of the United States over the last four years. Trump may not care about any of this once he leaves office, but the ill effects on the nation’s interests will be long-lasting.