Donald Trump's 'Take the Oil' Strategy in Syria Is a Mistake 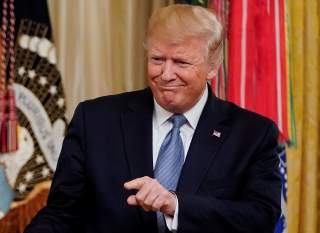 Confusion has prevailed regarding the purposes of the U.S. troop presence in Syria, and whether the declared purposes are the actual ones. Originally the expedition was widely understood to be all about combating the Islamic State (ISIS) after the group had established a mini-state on a large portion of Syrian and Iraqi territory. Then hawks within the Trump administration and President Trump himself, in a classic case of mission creep, declared that the U.S. troops were also in Syria to “watch Iran”. Later variations of the creeped-up mission included not only watching Iran but also, through some unexplained mechanism, getting Iran and maybe Russia to abandon their positions in Syria.

More recently, Trump has been under much pressure from various parts of the political spectrum to keep the U.S. military in Syria, in contradiction with his earlier stated intention to exit and his orders to redeploy troops that had been in the Kurdish-inhabited northeastern part of the country. Political pressures and contradictory tendencies are a prescription for even less clarity than before about what the troops’ mission is or ought to be. Trump, who is trying to milk as much political advantage as possible from the killing of ISIS leader Abu Bakr al-Baghdadi and proclaimed that because of al-Baghdadi’s death “the world is now a much safer place,” is resisting the idea that the original mission of combating ISIS in Syria is still necessary, at least in the general and open-ended way in which that mission was first framed. So now the declared mission has evolved yet again, with a new rationale that had emerged even before al-Baghdadi’s removal. Some U.S. troops are staying in eastern Syria, according to this rationale, to secure Syria’s modest oil resources.

There is still an ISIS dimension to this rationale, in that the group, while it had its mini-state, gained some revenue from the exploitation of oilfields under its control. But to do that it needed the mini-state. Any scenario in which ISIS once again exploits, rather than just damages, Syrian oilfields presupposes re-establishment of its territorial caliphate, which means the world would once again be facing a bigger and more general anti-ISIS task. In its current status as an insurgent movement and terrorist group rather than a mini-state, ISIS is in no position to exploit the oil, except perhaps in an extremely small way, in the manner of Nigerian banditry, by surreptitiously tapping into a pipeline.

This leaves open the question of what the Trump administration intends to do with the oil that it has “secured” through military occupation. That, in turn, raises disturbing questions of whether the United States is engaging, contrary to international law, in wartime pillaging of Syria’s oil.

But there is another disturbing implication that deserves attention especially because of how big a deal Trump is attempting to make of the blows against ISIS and how they supposedly have made the world “much safer”. From a counterterrorist perspective, taking possession of oil resources is one of the worst possible rationales for justifying a U.S. military presence in a foreign country.  And in his Sunday morning performance, Trump couched the subject in one of the worst possible ways.

A prominent and longstanding theme in the ideology and propaganda of terrorist groups rooted in the Arab Muslim world—including al-Qaeda and ISIS—is that the United States and the West are out to plunder the resources of Muslims. Such groups violently oppose U.S. troops in Muslim countries partly because they are seen as furthering the plundering mission. Osama bin Laden repeatedly returned to this theme.  In a 2004 audio recording, for example, bin Laden stated that "the biggest reason for our enemies’ control over our lands is to steal our oil."  Bin Laden’s successor, Ayman al-Zawahiri, in a 2005 video called on his followers to "focus their attacks on the stolen oil of the Muslims…This is the greatest theft in the history of humanity. The enemies of Islam are consuming this vital resource with unparalleled greed.”  The terrorists’ focus on oil has raised concerns about terrorist attacks on oil facilities, but the idea of stealing resources that rightfully belong to Muslims has motivated attacks on the United States wherever such attacks can be staged.

Trump’s Sunday appearance before the press played right into this theme. Referring back to the Iraq War, Trump described as his own view at the time that if the United States was going into Iraq, it should “keep the oil.”  As for Syria’s oil, he said it can help the Kurds but “it can help us because we should be able to take some also.  And what I intend to do, perhaps, is make a deal with an Exxon Mobil or one of our great companies to go in there and do it properly.” A propagandist for ISIS or al-Qaeda would hardly have written the script differently.

Even if there were any ISIS fighters who turn away from their cause in response to Trump’s probably embellished account of a “screaming, crying, whimpering” al-Baghdadi, there surely are many more who are energized by the evidence confirming what their leaders have always told them about U.S. plundering of Muslim resources. Trump’s priority, however, was not in speaking to them but instead, as always, to his political base.