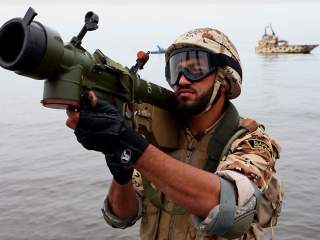 The recent intensification of Saudi-Iranian tension also has intensified the all-too-habitual urge, in debate about U.S. foreign policy, to take sides in other nations' conflicts even in the absence of any treaty obligations to do so or good U.S.-centered reasons to do so. That urge has multiple sources. Some may be common to humankind in general, growing out of ancient life amid warring tribes and clans. Other sources are more specific to Americans and are related to an American tendency to view the world in Manichean good-vs.-evil terms. The latter sources are rooted in several aspects of the American national experience. Whatever the combination of underlying reasons, the side-taking tendency is usually not good for U.S. national interests. The Saudi-Iranian rivalry illustrates why.

Any balance sheet that carefully takes account of the attributes, interests, and objectives of Iran and Saudi Arabia does not yield a sound case for the United States to favor either side of that rivalry, and specifically not for the dominant tendency to consider Saudis as the good guys and Iranians as the bad ones. Consider, for example, the political structure of each state. Saudi Arabia is one of the most undemocratic and politically backward countries in the world. It is ruled as a family enterprise in which ordinary citizens have barely begun to be granted any political role. The convoluted Iranian constitutional structure also has undemocratic elements, especially in the power of the Guardian Council to disqualify arbitrarily candidates for public office. But it still has significantly more democratic qualities than Saudi Arabia, with elections for a legislature and the presidency that really mean something. By Middle Eastern standards—which isn't saying a lot—Iran is one of the most democratic countries in the region.

Both countries have substantial deficiencies regarding consistent application of the rule of law. The secretive and politically manipulated judiciary in Iran leads to such injustices as the incarceration of American journalist Jason Rezaian. But Saudi justice isn't appreciably better. Longtime Saudi watcher Thomas Lippmann writes of “Saudi Arabia's record of mass arrests” and “secret rigged criminal trials”.

Personal liberties run into snags in both countries, but probably more so in Saudi Arabia, the country where women still are not even permitted to drive a car. In Iran, things have loosened up visibly since the early years after the Iranian revolution, with hijabs inching up to show more female hair and gatherings of people in public places looking somewhat more like scenes in the West.

In both countries the role of religion represents significantly different values from those of the United States. Saudi Arabia considers the Koran to be its constitution, and Iran calls itself an Islamic republic, with a disproportionate political role for Muslim clerics. But of the two, religious restrictions are greater in Saudi Arabia, where legally there is zero freedom of religion. Any religious practice other than that of the approved version of Sunni Islam takes place only furtively and illegally behind closed doors in private residences. In Iran there certainly is religious discrimination, most notably but not exclusively against people of the Baha'i faith. But the Iranian state officially recognizes religious minorities—including Christians, Jews, Zoroastrians, and others—and permits them to practice their religion.

As for foreign policy, which is where hard American interests and not just American values are most involved, despite the habitual recitation of the familiar mantra about Iran “destabilizing” the region, the mantra simply does not reflect actual Iranian behavior. Destabilization is a term more accurately applied to Saudi actions in the region. David Ignatius aptly writes that “Saudi Arabia’s insecurities have been a driver of conflict for 40 years. Fearful of domestic threats, the Saudis bankrolled PLO terrorism, jihadist madrassas, al-Qaeda’s founders and Syrian warlords.” Looking specifically at international terrorism, Saudi policies and practices—including the intolerant Wahhabist ideology, the Saudi habit of foisting on to other countries the violent extremism that the ideology has incubated, and the actions that Ignatius mentions—have done much more to foster terrorism and specifically the brand of terrorism that most threatens U.S. interests today than anything Iran is doing. In Iraq and elsewhere, Iran is today on the opposite side of conflicts from that brand of terrorism.

The strong preference among many Americans to be on the opposite side from Iran of any conflict in which it is involved has multiple roots. Bad historical memories, especially of the 1979-1981 Tehran hostage crisis, have something to do with this. So does the political clout in the United States of certain Middle Eastern governments (not only, or even mainly, the Saudi one), that base their political and diplomatic strategy on eternally keeping Iran a bête noire. Such reasons do not represent a rational pursuit of U.S. interests, and they do not take account of the considerations mentioned above when it comes to forming attitudes toward conflict between Iran and Saudi Arabia.

The fundamental disadvantage is that taking sides means the United States committing itself to objectives and interests that are someone else's, and not its own. An objective such as getting the upper hand in a local contest for influence may be a very rational objective for a local power to pursue, but that is not the same as what is in U.S. interests. Some of the objectives and policies, as is true with Saudi Arabia, may not even be very rational for the local power itself. Internal political weaknesses and rigidity may lie behind some of the local power's policies, as is true of the apparent Saudi inability to recognize the long-term threat that radical Salafism poses to Saudi Arabia itself and to shape policy accordingly. Sheer emotion may underlie other policies, as with how the Saudi obsession with toppling Syrian president Bashar Assad is related to possible Syrian involvement in the assassination of Lebanese prime minister Rafik Hariri, who had close ties with Saudi Arabia.

Another disadvantage for the United States of taking sides in a conflict is that doing so immediately subjects the United States to resentment and disapproval because of whatever baggage has come to be associated with the conflict, in addition to whatever the immediate issues ostensibly are. The current state of Saudi-Iranian relations are a function not just of last week's execution of the Shia activist cleric but of several other things. One of the most prominent sore points in recent months, for example, has been the fatal stampede at last year's hajj, in which hundreds of Iranian pilgrims died. Iranians have been understandably infuriated with Saudi Arabia for letting this incident happen. Anyone taking Saudi Arabia's side on anything at issue with Iran right now may seem to be insensitive to this tragedy.

Related to the point about associated baggage is the strong sectarian flavor of the conflict. For the United States to be seen taking sides in a conflict between Sunni and Shia, amid the highly charged sectarian tensions along this fault line in the Middle East, can only be a lose-lose proposition for Washington. The United States is much more likely to be seen as an enemy of some part of Islam than as a friend of some other part of it.

A further disadvantage of taking sides is that it reduces the opportunities for U.S. diplomacy, which serves U.S. interests best when the United States can do business with anybody and everybody. Shrewd U.S. diplomacy exploits local rivalries to obtain leverage and to play different rivals against each other for the United States' own advantage. Stupid U.S. diplomacy would cut in half the number of other countries the United States can effectively deal with by declaring half of them to be on the “wrong” side of local conflicts. Diplomacy does not work well when one is using only carrots with some countries and only sticks with others.

Finally, one should always be wary of the danger of getting sucked into larger conflicts because of involvement with the spats of lesser states. The European crisis in the summer of 1914 is the classic case of this. An equivalent of World War I is unlikely to break out in the Middle East, but this is just one of the costs and risks that constitute good reasons for the United States not to make as its own the quarrels of others, no matter how deeply ingrained is the habit of talking about certain states as allies and certain others as adversaries.