Entanglement in Yemen and the Logic of War 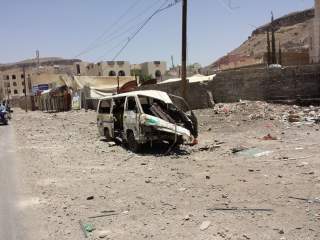 We are seeing today in Yemen a demonstration of how easily a supposedly limited U.S. involvement in an armed conflict becomes less limited, and how such involvement creates new enemies of the United States.

The deleterious entanglement of the United States in civil war in Yemen was already a major problem even before the events of the past week. The United States has associated itself with, and been providing indirect support to, the Saudi-led military intervention in Yemen. That intervention, especially through largely indiscriminate aerial bombardment, has been responsible for most of the severe civilian suffering in Yemen. Since the Saudi air assault began last year, civilian casualties have been averaging 13 per day. Total civilian deaths in the war are approaching 4,000, with many more injured and still more homeless. The Saudi role in causing most of this damage and the U.S. role in facilitating it certainly undercut any criticism by those governments of Russia's role in causing civilian suffering in Syria.

The newest step in the U.S. entanglement in Yemen is the direct application of U.S. firepower. On Thursday the United States fired cruise missiles at radar installations in territory controlled by the Yemeni rebels known as Houthis. The missile strikes were in response to a couple of unsuccessful firings from that territory of missiles evidently aimed at a U.S. warship. The leadership of the Houthi movement denies involvement in the targeting of the U.S. ship. Whether or not there is any validity to that denial, the result is the same: U.S. involvement in the Yemeni civil war has escalated. That involvement previously consisted of behind-the-scenes but nonetheless obvious support to the Saudi offensive. Now it includes the U.S. Navy directly firing its weapons at Yemeni targets.

Yet another, very much in play in this week's events, involves the desire to protect and defend one's own forces. The Pentagon described this week's cruise missile strikes as retaliation necessary to protect U.S. vessels and their crews that were legitimately operating in the waterways of the Bab el Mandeb strait and the Red Sea. That is a valid explanation, but it carries little weight with Yemenis who simply see the United States firing deadly weapons at their nation. The Pentagon said nothing about human casualties at the receiving end of the cruise missile strikes, but as Micah Zenko notes, the last time that the United States fired cruise missiles at a target in Yemen (in 2009), 41 civilians were killed.

The Houthi advances during the past couple of years are only part of a long and complicated story of armed strife in Yemen, the poorest of Middle Eastern countries. The issues and lines of conflict have involved contests for resources among different regions and tribes. There also has been a sectarian dimension to the internal warfare: the Houthis are champions of Zaidi Shias, a large minority in a country with a Sunni majority. The identities of the contenders in the current round of civil warfare do not give any reason for the United States to be more against the side of the Houthis than for them. The Houthis are allied with longtime president Ali Abdullah Saleh, who was America's man in Sana before he stepped down in 2012, amid popular protests and an assassination attempt that left him severely injured. The most threatening anti-U.S. element in Yemen has been Al Qaeda in the Arabian Peninsula, which is on the Sunni side of the sectarian divide; the Houthis are among the staunchest opponents of AQAP.

The usually cited rationale for opposing the Houthis is a relationship with Iran. The Iranians evidently have supplied the Houthis with some munitions, although most of the Houthis' arms have come from within gun-saturated Yemen itself. That's about as far as the relationship goes, beyond the partial religious affinity that may have been one of the motives for Iran giving some aid. The Houthis are not proxies of Iran. When they seized the capital city of Sana it reportedly was against the advice of Iran—which in that respect was acting as a force for restraint, not destabilization. In any event, whatever aid Iran may have given the Houthis is dwarfed in size and destructive impact by the direct Saudi armed intervention.

What is being demonstrated in Yemen, besides being a serious problem in its own right, carries important lessons for policy toward internal conflict and external interventions in other places, such as Syria. One lesson is that supposedly limited interventions are likely—for reasons that include the need to protect one's own service members—to become much less limited. (This dimension is routinely overlooked in discussions of establishing a no-fly zone or “safe zone” in Syria.) Another lesson is that U.S. military interventions in this region have created more adversaries of the United States than they have eliminated.

Yet another lesson concerns the folly of defining Middle Eastern politics in terms of some grand alignment of opposing forces and then getting directly involved in any conflict that can be construed as being a clash of such forces. Even if the Yemeni civil war were a front in some kind of Iranian-led regional offensive—and as noted above, it isn't—getting dragged into that war is less likely to serve U.S. interests than Iranian ones. Letting its regional rival Saudi Arabia bleed in the quagmire that the Saudi intervention has produced may have been another motive for whatever aid Iran has given the Houthis. There certainly is no advantage for the United States in being involved as well.