Epistemology, Rhetoric, and the Iranian Protests 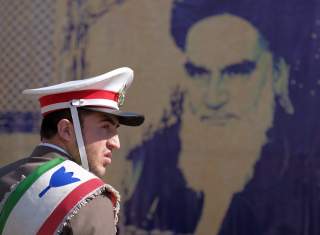 With any country that, like Iran, has been the subject of acrimonious debate in Washington, pronouncements by American observers about events in that country have more to do with politics here than with what is going on over there.  So it has been with much of the spinning and interpreting of protests in Iranian streets during the past few days.  Some guidelines for intelligent, responsible, and useful commentary on those protests are in order, and applicable no matter what are the policy preferences of whoever is commenting.

The first guideline is to apply a large dose of agnosticism to the question of where the protests are heading.  The future course of popular unrest in any country is inherently difficult to predict.  That future depends on the vicissitudes of emotion, the complex interplay of different issues and political forces, and the especially unpredictable ways in which minor incidents can spark much larger responses.  A current trajectory cannot be extrapolated into the future, partly because of the effects of decisions not yet made.  In the current Iranian case, security elements of the regime have refrained so far from using most of their capability to crack down on protesters, but have strongly hinted that the capability may yet be used.  Such use would change the game being played in Iranian streets, but again with much uncertainty about where things would go from there.

Some qualities of the current protests make their future path especially unpredictable, even in comparison with the larger protests in Iran in 2009.  There is no single movement with a recognizable leadership as there was with the Green Movement in the earlier disturbances.  There is no single happening or trigger equivalent to the disputed presidential election in 2009.  Diverse political elements have participated.  It appears that some of the first protests in Mashhad were the work of hardliners apparently seeking to embarrass President Hassan Rouhani, but they were joined by economically disgruntled citizens of other political persuasions.  The messages being chanted in the street also are diverse.

The diversity of the messages leads to another guideline, which is not to presume to know what is in the hearts and minds of protesters.  Nor should it be presumed that what is chanted or is written on a protester’s sign identifies the motivation behind the protests.  American commentators who have pushed for confrontation with Iran have taken pains to point out how one theme voiced in the protests has been that resources ought to be spent back in Iran rather than for foreign adventurism.  But inclusion of that message does not overturn the recurrent pattern—in country after country in addition to Iran—that, per Bill Clinton’s famous observation, it is the state of a nation’s economy that most determines whether political support is won or lost.  Most residents of provincial Iranian cities in which protests have occurred probably care little about the Syrian civil war or the balance of forces in northern Iraq.  They care instead about unemployment and a stagnant standard of living.  If a slogan about foreign adventurism is consistent with the economic grievances and it sounds like a point where the regime might be vulnerable, then it gets used.

Americans ought to find this easy to understand because we have had in the United States similar dynamics between economic discontent and political themes.  Donald Trump molded a winning campaign with themes such as America having allowed foreigners to take advantage of it in ways that supposedly have had economic repercussions at home.  But the Rust Belt voters who were swayed by Trump’s message did not really care about whether bilateral trade deals were better than multilateral agreements or whether Europeans weren’t paying their fair share of NATO's expenses, let alone about U.S. refueling of Saudi warplanes bombing Yemen.  They cared about unemployment and a stagnant standard of living.  And if Trump loses their support it will not be because, contrary to what he said in the campaign, he has not curbed foreign adventurism and has even expanded it.  It instead will be because he did not bring back jobs and improve standards of living for working class Americans.  Such dynamics are remarkably similar to what appears to be going on with much of the current popular unrest in Iran, which can be described as a working class protest in which many protesters have much in common with denizens of the Rust Belt.

Another guideline is that, however much knowledge one may or may not claim to have about what is going on in Iran, one at least should be logically (as well as morally) consistent.  The protests have presented consistency challenges especially to those who have argued most strongly for confrontation with, and punishment of, Iran.  The chief inconsistency is that those who have been most in favor of imposing more rather than fewer sanctions on Iran are also those who today are calling most loudly for supporting the economically disgruntled protesters in Iranian streets—who are among those most economically harmed by the sanctions.

Arguments that have long been used against the Joint Comprehensive Plan of Action (JCPOA), the agreement that restricts Iran’s nuclear program, raise additional challenges to consistency.  If the current protests are a good thing—and the aforementioned anti-Iran American hardliners seem downright excited about them—one needs to note that this is happening with the JCPOA having been in effect for two years.  Wasn’t that agreement, according to the agreement’s opponents, supposed to have given Iran a windfall that unduly and prematurely relieved economic pressure on Tehran?  The opponents try to square this circle with the notion of the regime diverting the “windfall” to foreign adventurism while making citizens suffer.  This notion usually gets conveyed without any supporting data about economics and fiscal policies (and Rouhani’s policies have emphasized domestic economic improvement about all else).  It also raises another inconsistency.  If the current protests really are as much of a regime-shaking occurrence as some American hardliners contend, wouldn’t any Iranian leader with at least half a brain and a desire to stay in power use the “windfall” to buy domestic support rather than wasting it away on foreign adventurism, if that really were the choice?

By treating the protests as a vehicle for pressuring the regime to change non-nuclear policies, the American hardliners also run into inconsistency with all their prior opposition to doing any business with the Iranian regime, of which opposition to the JCPOA has been a part.  If this regime is as irredeemable and thoroughly dominated by hardline fanatics as the American hardliners have repeatedly portrayed it, who could possibly emerge from such a cauldron to respond positively to street protests?  Thus we get intellectual contortions such as trying to argue in the space of a single paragraph that it was a mistake in the past to “be in the business of currying favor with the regime’s ‘moderates’ ” but that today the protests provide an occasion to “strengthen the arguments of pragmatists arguing for a change in policy”.

Regardless of whether the eventual overall outcome of the current protests is good or bad from a U.S. point of view, it would be just as mistaken for supporters of the JCPOA to claim credit for whatever good comes out of them as for opponents to make such a claim.  The JCPOA needs to stand or fall based on its intended purpose, which was to close all pathways to a possible Iranian nuclear weapon.  The economic underperformance that has spawned discontent in Iran, as manifested in the current protests, has multiple sources.  Economic mismanagement by the regime is one.  Sanctions are another, including non-nuclear sanctions that the United States keeps in place today.  Moreover, even the lifting of nuclear sanctions has not brought much of the hoped-for economic benefit to Iran, given uncertainty in the private sector—uncertainty the Trump administration has vigorously stoked—about the future of the JCPOA, with the private sector knowing of the U.S. Treasury's ability to punish even non-American businesses for any future sanctions transgressions.  The Rouhani government also probably raised Iranian economic expectations to an unreachable level as it worked to sell the agreement over hardline Iranian opposition.

Another guideline for American commentators of any persuasion is to be mindful that such commentary is not only part of an American debate but also is heard by Iranian ears.  This includes ears in the regime, where, as with regimes everywhere, the perception that a foreign government is trying to overthrow you is a big disincentive to doing any business with that government or trusting its promises.  Also listening are the protesters and other citizens of Iran.  Regardless of the sympathy we have for them, American expressions of support will not be fuel for keeping the protests going.  No would-be protester will go out in the street and risk arrest or worse because some U.S. leader encouraged him to do so.

The much more likely hazard is to taint Iranian opposition with the stain of foreign involvement.  For any Iranian movement, a perception that the United States put it up to whatever it is doing is a political kiss of death.  Those in the United States urging a more active encouragement of the protests dismiss this hazard by saying, “No matter what we say and do, the regime will seek to blame the United States for the protests.”  Of course it will; that’s the sort of accusation almost any regime in such a situation will make.  But that’s beside the point.  What matters is whether the United States makes such accusations appear credible, in the eyes of Iranians in the street and Iranians in general, by what it does and what it says.