Fear of a Decrease in Fear of Iran 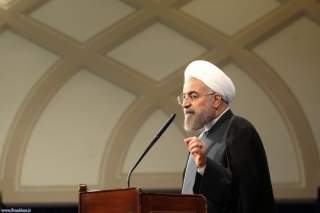 Many participants in debate on U.S. policy in the Middle East have a lot invested in maintaining the idea of the Islamic Republic of Iran as a bogeyman forever to be feared, despised, sanctioned, and shunned, and never to be cooperated with on anything. The lodestar for this school of advocacy is the Israeli government of Benjamin Netanyahu, who proclaims to us nearly every day that Iran is the “real problem” underlying just about everything wrong in the region, and who adamantly opposes anyone reaching any agreement with Tehran on anything. Netanyahu does not want a significant regional competitor that would no longer be an ostracized pariah and that will freely speak its mind in a way that, say, Egypt and Saudi Arabia, with the other equities they have in Washington, cannot. He does not want the United States to come to realize that it need not be stuck rigidly to the side of—and always defer to the preferences of—“traditional allies” such as Israel and that it can sometimes advance U.S. interests by doing business with those who have worn the label of adversary. And of course the more that people focus on the “real problem” of Iran, the less attention will be devoted to topics Netanyahu would rather not talk about, such as the occupation of Palestinian territory.

For those in Washington who wave the anti-Iranian banner most fervently, the waving is not only a following of Netanyahu's lead but also a filling of the neoconservative need for bogeymen as justification and focus for militant, interventionist policies in the region. The neocons do not have Saddam Hussein to kick around any more, and they unsurprisingly would prefer not to dwell upon what transpired when they kicked him out. So it's natural to target the next nearest member of the Axis of Evil—and even when the neocons were still kicking Saddam, they were already telling Iran to “take a number.” The anti-Iranian banner-waving of neocons, despite the abysmal policy failure of the Iraq War that should have closed ears to what they are saying today—finds resonance among a general American public that historically has had a need for foreign monsters to destroy as one way to define America's mission and purpose.

The prospective reaching of a negotiated agreement to limit Iran's nuclear program has been a major concern and preoccupation of those who want to keep Iran a hated and feared pariah forever. An agreement would represent a major departure in U.S. relations with Iran. So the anti-Iran banner-wavers have been making a concerted effort for several months to undermine the negotiations and torpedo any agreement that is reached. Not reaching an agreement has become such a major goal that the banner-wavers have no compunction about taking the fundamentally illogical stance of exclaiming about the dangers of an Iranian nuclear weapon while opposing an agreement that would place substantially more restrictions on the Iranian program, and make an Iranian weapon less likely, than without an agreement.

At least the anti-agreement forces have had a game plan, involving such things as hyping “breakout” fears and pushing Congressional action that is disguised as support for the negotiations when it actually would undermine them. Now suddenly along comes a security crisis in Iraq, in which parallel U.S. and Iranian interests and the opportunity for some beneficial U.S.-Iranian dialogue are clear. Oh, no, think the banner-wavers, we didn't plan on this. One detects a tone of panic in their jumping into print with emergency sermons reminding us that Iranians are evil and we must never, ever be tempted into cooperating with them.

One of the more strident of these sermons comes from Michael Doran and Max Boot. The panicky nature of their piece is reflected in the fact that the first thing they do is to reach for the old, familiar Hitler analogy. The idea that the United States and Iran share any common interests is, they tell us, just like Neville Chamberlain working with Adolf Hitler.

The next thing they do is to match the most imaginative conspiracy theorists in the Middle East by suggesting that the government of Iran really is supporting and promoting the Sunni radicals of ISIS—yes, the same ISIS whose main calling card has been the beheading and massacre of the Iranians' fellow Shiites. The logic behind this conspiracy theory, explain Doran and Boot, is that a threat from ISIS makes Prime Minister Maliki and Iraqi Shiites “ever more dependent on Iranian protection.”

Then Doran and Boot go way into straw-man territory, saying the United States would be making a “historic error” if it assisted “an Iranian-orchestrated ethnic-cleansing campaign” carried out by ruthless Revolutionary Guards. Of course, the Obama administration isn't talking about doing anything of the sort. We weren't flies on the wall when Deputy Secretary of State William Burns talked earlier this week with the Iranian foreign minister about Iraq, but it is a safe bet that a theme of U.S. remarks was the need for greater cross-community inclusiveness in Iraq and the need not to stoke the fire of the sectarian civil war.

Besides dealing with straw men, Doran and Boot here exhibit another habit of the banner-wavers—which comes up a lot in discussion of the nuclear issue—which is to assume that Iran will do the worst, most destructive thing it is capable of doing regardless of whether doing so would be in Iran's own interests. What advantage could Tehran possibly see in propping up an increasingly beleaguered and unpopular Nouri al-Maliki with rampaging Revolutionary Guards? What Iranian interest would that serve?

This gets to one of the things that Doran and Boot do not address, which is what fundamental Iranian interests are in Iraq, including everything those interests involve in terms of stability and material costs to Iran. Even if Iran had so much influence with Maliki that he could be said to be in Tehran's pocket, what would Iran do with such influence? Here is displayed another habit of the banner-wavers, which is just to assume that any Iranian influence is bad, without stopping to examine the Iranian interests being served and whether they are consistent with, in conflict with, or irrelevant to U.S. interests.

The other major thing that Doran and Boot do not do is to mention what militant U.S. policies have had to do with Iranian behavior they don't like. In the course of loosely slinging as much mud on the Iranians as they can, they state that Iran's Revolutionary Guard Corps “has been responsible for attacks against U.S. targets stretching back more than 30 years.” They do not offer any specifics. The only ones that come to mind involve a U.S. military intervention in Lebanon, U.S. support for Saddam Hussein's Iraq in the Iran-Iraq War, a U.S. troop presence in eastern Saudi Arabia, and the eight-year-long U.S. military occupation in Iraq.

Doran and Boot write that instead of having anything to do with the Iranians, we should develop a coalition of those “traditional allies” to prosecute a conflict on the “vast battlefield” that embraces Iraq and Syria. This sounds just like the talk of a coalition of “moderates” we heard during the George W. Bush administration. As then, the talk is apparently oblivious to ethnic, sectarian, and geographic realities. Doran and Boot suggest that clever covert work against “Iranian networks” would be enough to “pull the Iraqi government out of Iran's orbit.”

This sort of thinking represents not only a missed opportunity to make U.S. diplomacy more effective but also a recipe for further inflaming that vast battlefield.