Foreign Policy and Presidential Politics as a Team Sport 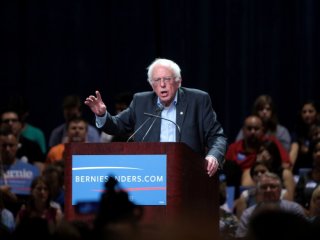 Bernie Sanders has become a primary focus of a common quadrennial subject for foreign policy wonks and presidential campaign watchers: the “teams” of advisers who affiliate with different campaigns. Ostensibly these advisers provide their respective candidates with wisdom and expertise that are inputs to coherent positions that the candidate takes on relevant issues during the campaign and, if their candidate wins, to coherent and sound policies while in office. Sanders has drawn criticism for being thin on foreign policy advisers. It is a news item when he finally takes steps to assemble a foreign policy “team.” Contrasts are drawn with the army of foreign policy advisers, numbering in the hundreds, who are listed as affiliated with Hillary Clinton's campaign.

Sanders's campaign may warrant criticism for thinness on foreign policy, but not on any scale measured by the number of advisers who have been signed up. Rather, it is a matter of relatively small attention to foreign policy in the candidate's own speeches in contrast to his heavy emphasis on the primarily domestic economic matters that he has made into his leitmotif. This relative inattention may be a matter of discomfort to many who like much of what they hear from Sanders on those domestic issues but realize that foreign policy is a very large and important part of any presidency. The situation may also discomfort those who expect that a Sanders foreign policy probably would be more to their liking (or at least less objectionable) than what any of the other candidates in either party would be apt to offer but would like to hear more from Sanders to be confident about that. The American Conservative magazine, in a report card that grades all seven remaining major party presidential candidates according to how much their stated positions indicate they would follow a foreign policy of “realism and restraint,” gives Sanders a higher overall grade (a B) than any of the other six.

The teams or armies of advisers have more to do with other games being played than with helping a candidate to espouse wise policies on the campaign trail or to formulate wise policies while in office. For one thing, short-term politics nearly always trumps wisdom, as indicated by, among much other evidence, flip-flops that nominees execute between primary season, when they are appealing to a party base, and the general election campaign, when they seek support from a broader electorate. Moreover, it is hard to believe that, for example, any one of those hundreds of individuals on the Clinton campaign's advisory roster can realistically hope to have much influence on what comes out of the candidate's mouth in a debate.

The main game being played with all of those advisory rosters is the game of getting appointed to desirable jobs in the next administration. Although the rosters do include some old hands who are no longer on the make, the campaign advisory relationship has become the single most used channel for obtaining a senior executive branch job. Aspiring job-seekers have to exercise their political prediction skills in trying to determine which horse will win the race and thus to which horse they should hitch their wagon. Campaigns have been known to take advantage of this situation by telling potential advisers that if they do not sign up with the campaign early, well before the party's nominee has been determined, they can forget about thumbing through the Plum Book and getting an appointment in any administration led by that candidate. So who gets placed in senior policy-making jobs is in large part a matter of election predictions and luck, as well as personal maneuvering and connections. This is all an awful way to staff a government. Most other advanced democracies do not staff their governments that way. Most of them, after an election results in a change in political control from one party to another, have a far smaller turnover of policy-makers at the top, with a professional bureaucracy already in place to execute their policies; that is part of what a truly professional bureaucracy does.

Meanwhile an advantage to a campaign of having a large roster of purported advisers is that a large number of people who write op eds and otherwise participate in public discourse will be restrained about anything that could be interpreted as criticism of the candidate. Good for the candidate; not so good for free-wheeling and uninhibited public discourse about the issues.

Some concerns that have been expressed about the thin foreign policy advisory roster of Sanders—that this raises doubts about the ability to staff a Sanders administration and to hit the ground running once in office—are ill-founded. Whoever is the next president, he or she will be supported by foreign policy teams that are large, experienced, and well positioned to implement the new president's chosen policies. Those teams have names such as the Department of State and Department of Defense.

It does behoove us, as a caveat to all of the above, to glance at those rosters of campaign advisers to catch any patterns that may constitute a warning flag about the direction the aspiring president would take. This is especially true if there are patterns of signing up people associated with directions of the past that are known failures. Observers have noticed, for example, the strong pattern of Marco Rubio's foreign policy advisers being associated with past neoconservative policies, including the disastrous Iraq War. In this case the candidate's own statements seem to be going in the same direction as those advisers' predilections—a fact possibly related to Rubio's stick-to-the-talking-points campaign style that Chris Christie so ruthlessly highlighted. The American Conservative's report card on realism and restraint gives Rubio the lowest marks of any candidate: straight Fs.

Apart from such warning flags, it is appropriate for American voters to focus much more, as nearly all voters will, on the candidate rather than the advisers. Even the tiny sliver of the electorate who might care about who will be appointed assistant secretary of state or NSC senior director for some critical region would have a hard time gaming out that consideration as a reason for supporting one candidate rather than another. The post-election maneuvering for appointments involves too many non-substantive variables for the outcome to be predictable. Implied debts to donors may also have as much to do with some aspects of an administration's foreign policy as the past positions of senior appointees. Intelligently choosing a presidential candidate, even if the chooser focuses narrowly on some aspect of foreign policy, is still far from an exact science and involves not only declared positions on issues of most concern but also the demonstrated judgment, temperament, and experience of the candidate.