Here Come the Tanks and B-2 Bombers: Why Donald Trump Hijacked Independence Day 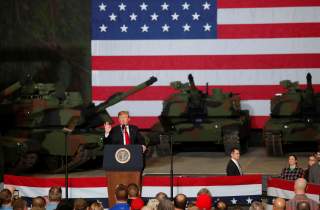 Ever since President Donald Trump decided to intrude on the Independence Day celebration in the nation’s capital, this Fourth of July has promised to be one of the most prominent it’s-all-about-me events that the he has staged. Trump evidently has spent much of his own time and attention on the planning. He has even invested his energy on the advertising and tweeted that people should look forward to a program featuring “an address by your favorite president, me!”

Independence Day events on America’s front lawn, the National Mall, have traditionally been innocently nonpartisan and welcome respites from the divisiveness that has come to constitute everyday business in Washington. Recent presidents have played little or no role in the celebrations. The most recent divisive note may have been the attempt in 1983 by Ronald Reagan’s secretary of the interior, James Watt, to ban the Beach Boys from performing at that year’s Fourth of July concert on the Mall, saying they would attract “the wrong element” and that he preferred a more “wholesome” performance by Wayne Newton. The resulting backlash—including from Nancy Reagan, who described herself as a fan of the Beach Boys—forced Watt to back down, although by then the Beach Boys, riding a wave of popularity because of Watt’s action, were already booked to perform elsewhere.

No matter how nonpartisan a script Trump’s speechwriters prepare for him, his penchant for going off-script means that anything could happen when he gets before a crowd and a microphone in front of the Lincoln Memorial. Thus, ordinary folks who in past years have enjoyed visiting the National Mall and spreading their blankets where they could get a good close-up view of the fireworks will have trouble doing so this year without the risk of becoming part of a Trump campaign rally. The substantial other costs and disruptions of what Trump is doing to the holiday range from additional clean-up expenses to interruptions of flight operations at National Airport.

Even an apparently cost-free part of the program—the donation by two major fireworks companies of a thirty-five-minute display—carries the Trumpian signature of a blurring of private business interests with affairs of state. Ninety percent of the fireworks used in the United States come from China, and the American Pyrotechnics Association has been lobbying the administration to exclude fireworks from any new tariffs to be imposed on goods produced in China. It probably is no coincidence that the companies jumped at the chance to help produce an event so important to the president while trade negotiations with China are underway.

But the most distinctive and visible feature of this Fourth of July event on the Mall probably will be the military component that Trump has insisted on inserting. Flyovers by military aircraft are to include the Navy’s Blue Angels, an F-35 fighter, and (at an operating cost of $140,000 per hour), Air Force One. The most recently reported additions will be armored vehicles on the ground. Abrams tanks and Bradley fighting vehicles already have appeared at a Washington railroad yard as part of the preparation. Trump has been hankering for a big military parade in Washington ever since President Emmanuel Macron of France hosted him at a Bastille Day parade two years ago. The prohibitive costs, including necessary repairs after armored vehicles grind up Pennsylvania Avenue, led Trump to stand down, but now he is trying to realize a portion of his vision by tacking it on to Independence Day observances.

The material expenses, including the damage to infrastructure, is not even the most important cost. Newt Gingrich is short-sighted when he says, “Other than the fact they have to pay to fix the streets, who cares?” The greatest cost is the message all of this sends, on the United States’ national day, to overseas audiences as well as domestic ones about what this nation represents.

Independence Day is not about the military. Other holidays serve that purpose. Veterans Day recognizes military veterans, Memorial Day is the day to remember fallen service members, and Armed Forces Day, though not a legal holiday (it is observed on the third Saturday of May) is an occasion for recognizing the military as a whole. The Fourth of July is not truly equivalent to France’s Bastille Day, which marks the date when a mob stormed a prison. The Fourth of July is instead the anniversary of the signing of a document in which the founders of the United States declared that certain truths are self-evident, including the inalienable rights of life, liberty, and the pursuit of happiness. An Abrams tank doesn’t have much to do with that.

The comparisons most overseas observers may make with a military-heavy Independence Day event will be less with Bastille Day than with the hardware-heavy parades they have been used to seeing in Moscow or Pyongyang. Trump’s bromances with Vladimir Putin and Kim Jong-un encourage the comparisons. So, do Trump’s moves in an authoritarian direction at home, which would be anathema to the signers of the Declaration of Independence.

A military-heavy event also accentuates the overseas image of the United States as a power inclined to use military force as a first rather than a last resort. Trump—notwithstanding his posture during the 2016 campaign as the less hawkish candidate—has added to that image with his deployments of armed forces to the Middle East, threats of military attack, and appointment of uber-hawks to powerful positions in his administration.

Trump no doubt will be obsessed, as always, with the size of the crowd before him on the Fourth of July. Despite the added encumbrances this year, flyovers and bigger-than-ever fireworks probably will attract significant attendance. Overlooked will be the impact on crowds overseas that form impressions about what the United States is all about and that influence how much their own governments will support or oppose U.S. objectives overseas.