Hezbollah and the Simplistic School of Counterterrorism 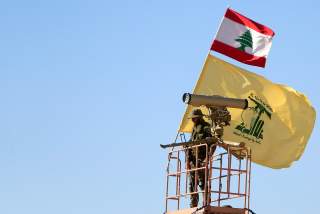 Last month President Trump made a joint appearance at the White House with a visiting head of government, during which Trump spoke of the visitor’s country being “on the front lines in the fight against” an organization that is part of that same country’s governing coalition.  The visitor was Lebanese Prime Minister Saad Hariri and the organization was Hezbollah.  Members of Hezbollah are ministers in Hariri’s cabinet.  Hezbollah has the fourth largest bloc of seats among the two dozen parties that are represented in Lebanon’s parliament.

Trump’s comment could be dismissed as an unsurprising gaffe from someone whose ignorance of the outside world is well known (and whose disorganized White House might have contributed to lousy staff work in preparing the president’s notes for the appearance with Hariri).  Even if Trump had been better informed about current Lebanese politics, he might not have backed off from his comment.  The United States does not have governing coalitions in the same sense as countries with parliamentary systems, but the nearest equivalent might arise with any glimmers of bipartisan cooperation on, say, health care.  Imagine that a foreign visitor came to the White House and praised the United States for being “on the front line in the fight against Democrats.”  Although most observers would consider this to be a ridiculous and outrageously inappropriate remark, Trump might accept it smilingly as a personal compliment.

Where terrorism is involved, however, a simplistic approach often prevails that is broadly held and goes far beyond Trump.  The problem arises in failing to recognize that terrorism is not some fixed set of people, groups, or states.  It instead is a tactic that has been used by many different people and organizations in the pursuit of varying objectives.  Yet the fixed-group attitude persists and frequently is visible in policy discussion and media coverage.  The official U.S. list of foreign terrorist organizations (FTOs) is treated as if it were a master roster of organizations that we should never countenance, even though it was created twenty years ago only as a legal necessity to add precision to legislation that criminalized material support to terrorism.

If the United States supposedly were never to do any business with anyone who had used terrorism, it would somehow have to explain away the extensive business it has done with leaders who had been up to their eyeballs in terrorism, including Gerry Adams, Menachem Begin, and Yitzhak Shamir.  The same is true not only of individual leaders but also some groups, such as the African National Congress.  We decide which of the users of terrorism we will countenance and which ones we won’t according to criteria other than terrorism itself.  Only we don’t admit that we’re doing that, so as to preserve the fiction of being steadfastly opposed to terrorism wherever it arises.  And this inconsistency doesn’t even take account of the U.S. acceptance of other applications of political violence that, although they do not meet the formal definition of terrorism because they involve overt use of force by a state, are just as deadly to many innocent civilians (such as the force that Saudi Arabia uses in Yemen, or that Israel regularly uses in the West Bank).

The simplistic view of terrorism fails to distinguish among the vastly different interests and objectives of groups that have used terrorism and that may appear on the FTO list.  This failure was prominent in Trump’s comment at his press conference with Hariri, in which the president listed as the groups that Lebanon supposedly was on the front lines against as “ISIS, Al Qaeda, and Hezbollah”.  There is no comparison between the first two of those and the third.  ISIS and Al Qaeda are transnational terrorist organizations that seek to overturn governing structures in the Muslim world and to impose an extreme form of rule throughout that world.  Hezbollah, by contrast, is focused mainly on sectarian politics and the distribution of power in Lebanon and its environs.  Hezbollah’s participation in a governing coalition with other parties in an existing nation-state is far beyond the realm of anything possible with ISIS or Al Qaeda.

Hamas is another group that undeniably has used terrorism but otherwise has very little in common with the likes of ISIS and Al Qaeda.  Like Hezbollah, it is focused primarily on more parochial political objectives—in Hamas’s case, on self-determination and political power in Palestine.  It has demonstrated its ability and willingness to use peaceful means to pursue those objectives by winning a free and fair election among Palestinians.

The simplistic view tends to disregard the circumstances leading to the use of terrorism and to the emergence of groups that have used the tactic.  Hezbollah was born in the early 1980s in the midst of a civil war in Lebanon.  A major cause of both the war and the birth of the group was strong sentiment among Lebanon’s growing Shia population that it was underprivileged and unfairly underrepresented in Lebanese politics.  A more immediate circumstance underlying the emergence of Hezbollah was Israel’s invasion of Lebanon in 1982.  The invasion was intended to chase the Palestine Liberation Organization to the ends of the earth—or at least to Tunisia, to which it decamped.  A salient episode in the Israeli military expedition was the Sabra and Shatila massacre, in which Israel’s army aided its Phalangist militia allies in the slaughter of hundreds and probably thousands of civilians, including Palestinian refugees and Lebanese Shia—Hezbollah’s constituency.  Any reference to Hezbollah’s hostility toward Israel needs to recall these events for a full understanding.

Hezbollah terrorism against U.S. interests consisted of opposition to a foreign military presence.  This was the case with the anti-U.S. terrorism in Lebanon in the 1980s (following a U.S. military intervention there, which came after the Israeli intervention), as well as with the one later attack against U.S. forces in which Hezbollah played a role: the bombing of Khobar Towers in Saudi Arabia in 1996.  These events are consistent with Robert Pape's research finding that suicide bombings are motivated by opposition to the presence of foreign military forces.  It is not consistent with any notion that Hezbollah is determined to kill Westerners or to attack U.S. interests in perpetuity.

Failure to take into account the actual motivations, methods, objectives, and standing of a group such as Hezbollah leads to poor policy on problems that involve such groups.  It leads to lack of awareness of how others perceive such groups and thus to what is or is not feasible as a U.S. policy objective.  These patterns are reflected in much of what is said in the United States about Hezbollah’s most important ally, Iran.  “Number one state sponsor of terrorism” is part of the litany of labels that routinely are affixed to Iran in American discourse.  But consult the State Department’s official justification for continuing to designate Iran as a state sponsor, and the gruel one sees is thinner than the discourse would suggest.  Most important, it is hard to see feasible changes from any Iranian regime that really did not want to be a state sponsor of terrorism.  Much of what is in the U.S. official statement reflects history, which cannot be changed.  Much of it involves Iran’s support, along with Russia, for the incumbent regime in Syria against a rebellion in which terrorist groups have played prominent roles.  And much of it involves nonstate groups with which Iran does business, and especially its most important nonstate ally, Lebanese Hezbollah.

Whether we like it or not, Hezbollah is a well-established political actor in Lebanon, with its participation in Hariri’s government being part of that position.  Most other political actors in Lebanon, even the group’s rivals, consider Hezbollah to be a legitimate and established actor that is here to stay, as do many other political actors elsewhere in the region.  There is no way any Iranian regime would abandon its relationship with the group, which Iran sees as a major defender of Shia interests, let alone to try to justify to its Iranian constituents such a move as necessary to fight terrorism.

There cannot be, nor should there be, any forgiving or forgetting what Hezbollah did to Americans in the 1980s.  The bombing of the Marine Corps barracks in Beirut in 1983 was, until 9/11, the deadliest terrorist attack ever against U.S. citizens.  But not forgetting and not forgiving does not imply adopting the simplistic approach toward any group that is on our terrorist list.

The current arrangements in Lebanon are probably the least bad way to keep that country from succumbing to full-scale civil war of the sort that afflicted it in the past and that afflicts Syria today.  Prime Minister Hariri put it this way: “My job and my task as prime minister of Lebanon is to shield Lebanon from any instability like in Syria or Iraq or any other country that surrounds us. . . The political positions between us and Hezbollah are very well known. They don’t agree on my policies, and I don’t agree on their policies. But when it comes for the sake of the country, for the economy, how to handle those 1.5 million refugees, how to handle the stability, how to handle the governing our country, we have to have some kind of understanding, otherwise we would be like Syria. So, for the sake of the stability of Lebanon, we agree on certain things.”