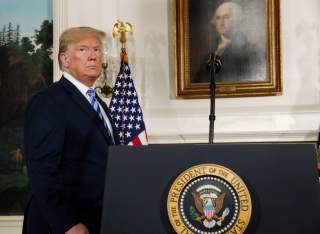 At least President Trump’s statement today about Iran made clear exactly what step he was taking: an outright material breach of U.S. obligations under the Joint Comprehensive Plan of Action (JCPOA), the multilateral agreement that restricts Iran’s nuclear activities. Trump said he will pile new sanctions on Iran, contrary to the commitment that was the U.S. side of the bargain that the JCPOA embodies and the United Nations Security Council has endorsed, even though Iran has been scrupulously observing its side of the bargain. Trump made no attempt, as some speculated he might, to dress up this blatant violation through some maneuver such as not waiving sanctions but not immediately enforcing them either.

The other main takeaway from the president’s statement was that, after a rambling and repetitive litany of every bad thing that could be said about Iran, Trump offered no plan, no strategy, and no real hope for doing anything about any of the supposedly awful things of which he spoke. There was only the vaguest suggestion of being willing to deal over unspecified terms at some unspecified future time when somehow Iran—contrary to what anyone could expect based on its history—had bowed in submission. This is a formula for nothing but more confrontation, more tension, and more risk of escalation to war. The formula was spoken as if making someone else’s economy suffer is ipso facto a benefit to the United States, which it isn’t.

Trump cannot by himself terminate the JCPOA, the future of which probably will remain uncertain in the weeks ahead as Iran and the other parties to the agreement discuss whether they can salvage a version of it without the United States. Iranian leaders probably have not yet fully decided on their response, which will depend largely on the behavior of the European private sector and how much the long arm of Trump’s Treasury Department deters commerce with Iran. But regardless of the economics, Trump’s breach frees Tehran, if it chooses, to cast aside its obligations under the JCPOA just as blithely as Trump is flouting U.S. obligations. Trump has killed U.S. participation in one of the most significant agreements on behalf of nonproliferation of nuclear weapons, and in so doing has put the agreement on life support.

Donald Trump pulled the trigger, but he has had accomplices who have kept up a drumbeat of opposition to the JCPOA that began even before negotiation of the agreement was complete. The strongest sources of opposition have been fundamentally dishonest. Their opposition has not been about the terms of the agreement, however much they have endeavored to make it sound that way. There have been, to be sure, more sincere expressions of opposition to the JCPOA, which is not surprising given how many people have been within earshot of the drumbeat and could not help but be affected by it. Such folks are unwitting victims of the dishonesty even if they are not sources of it.

The dishonest nature of the main opposition to the JCPOA is apparent from the glaring illogic of the opposition’s principal arguments. Most of the attacks against the agreement concern matters that would be worse without the agreement. Alarm about a possible Iranian nuclear weapon, as Trump expressed today, makes no sense when coming from the lips of someone who is trying to kill an agreement that closed all possible paths to such a weapon. Fulmination about a possible Iranian “breakout” toward a bomb makes no sense when it is said in the same breath as castigation of an agreement that changed breakout time from a couple of months to more than a year. Perhaps the most supremely illogical of the opposition attacks has concerned the “sunset” clauses applicable to some of the restrictions on Iran’s nuclear program. Of course, without the JCPOA, Iran would be able to indulge in the restricted activities right away, which is obviously worse than a prohibition of those activities that lasts a decade or more.

Such opposition arguments would not come from someone honestly concerned with conducting diplomacy in the interests of U.S. and international security. They instead are illogical straws grasped by people who have had other reasons to try to kill the agreement.

Opponents have tried to bridge the logic gap with the fantasy of a “better deal.” That fantasy never was applicable to a long and detailed agreement that was exhaustively, and exhaustingly, negotiated over a couple of years. Each party to those negotiations wrung as much out of those negotiations as it possibly could. Moreover, the principal opponents to the JCPOA, including most importantly the Trump administration, have neither shown a desire to negotiate any new agreement with Iran—on anything—nor explained where the bargaining strength to produce a “better deal” would come from. The fissures in the international community that Trump has done so much to promote mean less prospect for concerted international economic pressure on Iran than was the case when the JCPOA was negotiated. The administration has given no indication it would offer any incentives to Iran to motivate it to make any more concessions. Besides, Tehran would have no reason, no matter how much it was pressured, to reach any new agreement with a U.S. administration that had just reneged on an existing agreement on the same subject.

Lacking logic, the opponents have resorted to confusion. They have tried to sow misperceptions about the JCPOA. This has included outright lies, such as the one often heard, including from high levels of the Trump administration, that the United States had to meet commitments up front while Iran’s obligations were all to be fulfilled later. In fact, the opposite is true; Iran had to do nearly all the bomb-proofing steps the JCPOA required it to take—including dismantling centrifuges, disposing of most of its enriched uranium, and filling a reactor with cement—before it got an ounce of new sanctions relief.

In today’s statement, Trump continued the campaign of confusion. He included chestnuts such as the notion that Iran was given billions of dollars, contrary to the truth that unfrozen assets and returned funds were all Iran’s money in the first place. He said that the JCPOA “allowed Iran to continue enriching uranium and over time reach the brink of a nuclear breakout”—giving uninformed listeners the impression that the agreement had moved Iran closer to that brink rather than, as is actually the case, moving it substantially farther away from it.

Trump echoed another confusion-generating gambit: Benjamin Netanyahu's recent show-and-tell featuring old material about Iran’s previous work pointing to possible development of a nuclear weapon. Such material was the very reason an agreement such as the JCPOA was needed, but Netanyahu’s presentation was aimed at confusing people into thinking there was something new and that Iran was violating the JCPOA. In fact, there was nothing new, and Iran has rigorously observed its obligations under the agreement.

When logic is missing and even confusion may not be enough, opponents have resorted to smear tactics. An Israeli investigative firm reportedly was retained to try to dig up dirt on Obama administration officials who had duties related to negotiation of the JCPOA. Some reporting suggests that aides to Trump were involved in hiring the firm. It is hard to imagine getting any farther than this from an honest pursuit of objectives that are in U.S. interests.

Two motivations, more than any others, have driven the opposition to the JCPOA. One is the desire to wreck whatever Barack Obama accomplished. This clearly is Donald Trump’s principal motivation. Undoing whatever Obama did is the closest thing to an organizing principle in what is otherwise a disorganized set of Trump administration policies, especially in foreign policy. The motivation also has applied to many Congressional Republicans (although some of those who opposed the agreement when it was new have more recently, bowing to reason, urged Trump to stay in the accord). The urge to wreck has been reflected in the wrecking ball being swung even when—as with Obama’s principal domestic legislative accomplishment, the Affordable Care Act—no replacement structure is at hand.

The other major motivation is to stay in step with the preferences of the right-wing government of Israel. The political and financial mechanisms involved include fear among American politicians of antagonizing the lobby that works on that government’s behalf. They also include wealthy supporters of that government bankrolling advocacy groups dedicated to sustaining tension and confrontation with Iran, with opposition to the JCPOA being at the core of that effort.

The latter motivation involves double dishonesty, in that the JCPOA is very much in Israel’s security interests, as many retired senior Israel security officials have repeatedly stated. Of course it is; why wouldn’t anyone with a concern for the safety and well-being of Israel want to block all paths to an Iranian nuclear weapon, as the JCPOA does? However consistent it may be with U.S. interests to support Israeli security, it certainly is not in U.S. interests to support the game that Netanyahu is playing with the issue, which is to oppose any and all agreements with Tehran as a way of maintaining Iran as a pariah and a foil, in an effort to distract attention from Israel’s own destabilizing activities and to restrict U.S. diplomatic freedom of action in the Middle East.