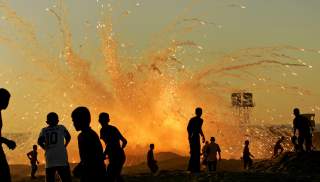 The Trump administration plan for Israel and the Palestinians, spearheaded by Donald Trump’s adviser and son-in-law Jared Kushner, has been widely recognized as a plan that lacks “peace.” Real peace plans entail compromises between the two parties that have been feuding; these plans can be modified through further negotiation between those parties and aimed at satisfying the minimum requirements of both parties. They are not an endorsement of nearly everything that one party to the dispute wants while shoving aside the other party and its interests, which is what the Trump White House’s proposal does.

Just as “peace” is a misnomer for the plan, so, too, is “state” an inaccurate label for the Palestinian entity that the plan describes. Rather, it would be a fractured Bantustan, not much more empowered than today’s Palestinian Authority, remaining under the security yoke of the conquering power that surrounds it. And even that entity probably would never come into existence, since it is predicated on the Palestinians meeting numerous conditions almost impossible to meet and with Israel the judge of whether those conditions have been met. For an especially trenchant and comprehensive dissection of the entire plan, see Daniel Levy’s two analyses of it.

The plan thus will not bring peace, but it is a sufficiently marked departure from previous U.S. policy on the subject to ask what changes will come from it. The most credible answer is that this move by the Trump administration likely drives a final nail into the coffin of the two-state solution. This will especially be true if the Israeli government of Benjamin Netanyahu proceeds to annex formally—as the plan gives it a green light to do—large portions of the occupied West Bank.

Viewing the plan as a departure from previous policy, however, must be coupled with the fact, as the International Crisis Group’s Nathan Thrall reminds us that the policies of multiple previous U.S. administration have paved the way to where the conflict stands today. They did so by letting Israel get away with unilaterally colonizing occupied territory while experiencing little more than slaps on the wrist in response.

An even more specific parallel between the Kushner plan and previous phases of this conflict is the pattern of Israel getting immediate benefits in return for only vague recognition of the Palestinians’ national aspirations and holding out the possibility of realizing those aspirations sometime in the future. The fruits of Jimmy Carter’s efforts at Camp David in 1978 fit this pattern. The Camp David Accords had two parts, one of which led directly to the Egyptian-Israeli peace treaty that the Israeli government of Menachem Begin especially wanted. The other part was a sketchy “framework” for dealing in the future with the occupied Palestinian territories—written, just as with the Kushner plan, without Palestinian participation. The outcome was not what Carter would have designed but it was the most that he and Egyptian President Anwar Sadat (who also wanted the bilateral peace treaty) were able to squeeze out of Begin. In subsequent months, Begin pocketed the separate peace with Egypt and did essentially nothing to move toward self-determination in the Palestinian territories.

Fifteen years later and under a different Israeli government, the Oslo Accords finally created the sort of interim Palestinian authority that the Camp David framework mentioned but it kept full Palestinian self-determination as an aspiration only, ostensibly to be realized sometime in the future. And today, the Kushner plan reprises—even with its not-really-a-state Bantustan—the formula of Palestinian interests as something not to be realized now but instead to be kept only as a dream for some distant time.

The Strategy of Dreams

The strategy of indefinitely kicking the can of Palestinian self-determination down the road to dreamland works best when any plans regarding political realities are kept vague and especially when such plans are not revealed at all. That is why the Kushner plan was held tantalizingly under wraps for so long. It certainly did not take three years to devise it. It is also why the Trump administration offered the promise of economic development (which, given all the conditionalities, also probably will never be realized) before saying anything about political terms.

In mid-2019, at the time Kushner was selling the economic proposals at a conference in Bahrain, I wrote this about the strategy underlying his still-not-fully-revealed plan:

In the meantime, the Kushner plan may be serving its authors’ main purpose and the Netanyahu government’s purposes by always being in the works and never reaching an endpoint. Central to the Israeli strategy of withstanding any pressure regarding Palestinian rights has been contrived impermanence, reflected in Israel never finally and formally defining its own borders, and in hints dropped now and then that Israel might someday agree to the creation of a Palestinian state. There is always some reason given for keeping the Palestinian promised land out of reach, such as that there is too much terrorism or too much division in Palestinian leadership, or something else—rationales that could also be used to delay the Kushner plan indefinitely. With an endpoint never reached, Israel avoids reactions to the full ugliness of permanent and formal subjugation of another nation.

The decision finally to pull the trigger of full publication of the plan reflects the political exigencies of two leaders whose troubles have intensified in the seven months since the Bahrain conference: Trump, who has been impeached, and Netanyahu, who has been indicted for corruption. Both leaders, facing re-election later this year, felt the increased need to boost the support and enthusiasm of their respective political bases. Meeting that need took precedence over-optimizing the strategy of indefinite can-kicking of the Palestinian issue.

That decision has disturbed those, such as the folks at the Washington Institute for Near East Policy, who could care less about the political standing of any one U.S. or Israeli leader than they do about shielding Israel from criticism over its denial of Palestinian rights. Last year, the institute’s executive director, Robert Satloff, argued that Kushner’s plan should not see the light of day—not because of unfairness or weaknesses intrinsic to the plan but because of the anticipated negative reactions to it. Now that it has seen daylight, Satloff’s colleagues, Dennis Ross and David Makovsky, are appealing to the Netanyahu government not to do the very annexation of much of the West Bank that the plan openly invites it to do. “Israel does not have an interest,” write Ross and Makovsky, “in having the Palestinians give up on their dream of statehood and aspiring instead to becoming voting citizens of Israel.”

That statement summarizes the longstanding Israeli strategy, which also has become the strategy of the Trump administration: don’t let the Palestinians have a state, but always sustain their dream of one. It is a way of getting them to accept their current status in the belief that it is temporary and that they can still realize their dream if they don’t get too uppity and troublesome about an unsatisfactory status quo.

But dreams can only support a position so far, especially when a dream runs up against the full ugliness of formal subjugation of one nation by another nation. Palestinian nationalism will not go away. It will not be bought off with enticements in glossy brochures about economic development. Support for it will not be abandoned by other Arabs—as demonstrated by the firm position on the subject that Saudi King Salman bin Abdulaziz Al Saud has repeatedly expressed. Regardless of what is done in future years by whatever passes for the Palestinian leadership, terrorists and other extremists will continue to exploit for their own purposes an unresolved Israeli-Palestinian conflict.

Another element of Israeli strategy—also underlying the Kushner plan—is still intact, which is to use the inevitable Palestinian rejection of the plan as an opportunity to add to the mythology about the Palestinians, and not Israel, supposedly always being responsible for missing opportunities for peace.  Many who are not familiar with the long and tragic history of this conflict will continue to believe the mythology.  Those who are familiar with that history know that it is a myth.  (To cite just one chapter in that history, when the two sides, nineteen years ago, were last close to reaching a comprehensive peace agreement, it was the Israelis, not the Palestinians, who walked away from the negotiating table, never to return.)

Whatever the remaining power of the mythology, by making the apparent death of the two-state solution more visible, the Kushner plan will encourage people, both inside and outside Palestine, to think and act less in terms of two states and more in terms of advocating for the rights of Palestinian Arabs within a binational state. That shift will make it harder than ever to avoid comparisons between the Israeli version of apartheid and the earlier South African one, and to the sorts of international pressures that helped to end the latter injustice.