How Not to React to Incidents in the Gulf of Oman 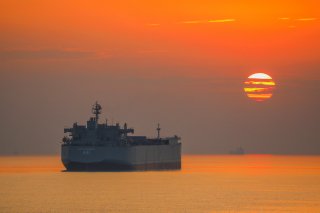 Strange things have happened over the past several days in the Gulf of Oman. Some crews reported that they temporarily had lost control of their ships for undetermined reasons. Another ship experienced what the British Navy called a “potential non-piracy-related hijacking” when unidentified armed men boarded it and then just as mysteriously left the ship.  Most attention was focused on yet another ship that was attacked by a drone that killed two crew members. This ship, a tanker called Mercer Street, is managed by an Israeli company, although the Liberian-flagged vessel is owned by a Japanese firm and the dead crew members were British and Romanian.

Choruses of denunciation were immediately directed at Iran. As usual with anything involving Iran, Israeli officials were the loudest in denunciating and the quickest to rattle sabers. Israel’s deputy prime minister and defense minister, Benny Gantz, declared that “the world needs to deal with Iran, the region needs to deal with Iran, and Israel also needs to do its part in this situation.” Gantz said, in response to reporters’ questions, that Israel was ready to strike Iran and that others ought to join in the military action.

A statement from U.S. Secretary of State Antony Blinken was somewhat less bellicose, using the words “strong condemnation” but promising only to consult with other governments about an “appropriate response.” “We are confident that Iran conducted this attack,” he said.

It is not apparent what gives Blinken such confidence. As always, those people outside the corridors of government do not have access to whatever restricted information is available inside those corridors. But well-founded attribution of responsibility for this type of attack may be elusive.

In the absence of any supporting evidence being made public, one must ask the question cui bono? Iran has just inaugurated a hardline president who needs to repair Iran’s sick economy fast. Accordingly, he, along with Supreme Leader Ali Khamenei, aspires to find relief from U.S. sanctions through reinstatement of the agreement that restricts Iran’s nuclear program. There is no longer a moderate Iranian president for hard-liners to undermine, and risking a military confrontation right now does not serve the agenda of the hard-liners who have the power.

Iran has denied involvement in the attack, in terms that sound stronger than if the regime were trying to send a message through such an operation. The denials should not be taken at face value, but neither should it be ruled out that the instigator of the attack was someone who would welcome military action in the Persian Gulf, with all the diplomatic damage that would entail, more than the regime in Tehran would have any reason to.

The Other Party to the Conflict

Even if the Iranian regime was responsible—and if the Israeli connection to the Mercer Street underlays its selection as a target—the incident would be only the latest data point in a clandestine Israeli-Iranian contest in which Israel has been at least as aggressive and at least as much the initiator as Iran has been. The Israeli record of sabotage, assassinations, and other damaging and aggressive actions against Iran is extensive. It includes acts of sabotage inside Iran that are unlike anything Iran has done inside Israel.

Many targets have been connected to Iran’s nuclear program, but other facilities have been hit as well, such as warehouses and petrochemical plants. And that is in addition to attempted attacks that Iranian authorities claim they thwarted. The clandestine nature of the sabotage does not yield smoking guns, but the Israeli hand in the attacks is at least as convincing as the alleged Iranian hand in what took place in the Gulf of Oman.

The Israeli attacks have extended to ships on the open seas.  The maritime targets have been not only military but also commercial, including—just like the Mercer Street—oil tankers. Israel has targeted at least a dozen Iranian ships bound for Syria, most of them have been oil tankers.

Added to all this has been a sustained Israeli campaign of airstrikes in Syria, which have been aimed mostly at targets associated with Syria’s ally Iran and have caused untold human casualties.

In any prolonged contest that includes tit-for-tat reprisals, it is easy to lose sight of how it all started and hard to determine which actions are tit and which are tat.  But examination of the Israeli-Iranian exchanges shows Israel to be the initiator and Iran the responder at least as much as the other way around. For example, the Israeli serial assassinations of Iranian nuclear scientists several years ago were unlike anything Iran has done against Israel—notwithstanding how what Israeli nuclear scientists are generally believed to have clandestinely accomplished goes far beyond, with military implications, what Iran has done. When Iran subsequently perpetrated some not very successful attacks against Israeli diplomatic targets overseas, it clearly was an attempt to respond to the killings of the scientists, even to the point of mimicking the methods of attack.

On assassinations of Iranians, Israel more recently has been at it again. Another prominent scientist was rubbed out last November. It is hard to see how this was a reprisal for anything.

If the Biden administration wants to uphold free and peaceful navigation of the seas and to oppose damaging and destabilizing actions in the Persian Gulf region, then it does no good to single out one party to a contest while ignoring the damaging and destabilizing actions of the other party. Doing so reveals U.S. policy to be based not on respect for norms of international behavior but rather on favoritism that exists for other reasons. Additionally, the party being singled out will continue to retaliate for damage inflicted upon it.

A Tale of Two Gulfs

So far, the response to what happened in the Gulf of Oman has several resemblances to an incident in another gulf fifty-seven years ago. In each case, there was a murky encounter at sea, with an eagerness to jump to conclusions about the evil intentions of a local power. The conclusion jumped to about a happening in the Gulf of Tonkin in 1964 was that North Vietnamese vessels had attacked, on August 4, an American destroyer, the USS Maddox, in international waters. No such attack occurred. The jump to the erroneous conclusion rested on political eagerness in Washington to ascribe aggressiveness to North Vietnam and on misinterpretation by keyed-up sailors of the fuzzy images they saw on nighttime ocean waves and on their oscilloscopes.

A forceful response by North Vietnam was thus quite understandable. But yet another similarity between the two episodes is that North Vietnam in 1964 had no more reason to want a wider war with the United States—in which the North Vietnamese would sustain enormous costs—than Iran does in 2021.

The similarity probably will not go so far as to result in Congress enacting a Gulf of Oman Resolution comparable to the Gulf of Tonkin Resolution, which became the Congressional authorization for the Vietnam War. But that is hardly reassuring, given the looseness with which authorizations for the use of military force have been treated in recent times. Today some congressional Republicans are resisting repeal of the 2002 authorization for war in Iraq—a war to overthrow Saddam Hussein, an arch-enemy of Iran—because, in the words of Sen. Ted Cruz (R-Texas), repeal would be used “as justification for continuing to go soft on Iran.”