Israeli-Arab Relations: Muddling Through by the Sword 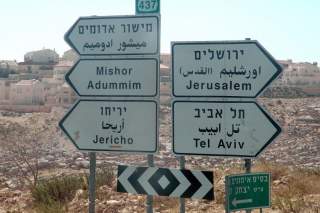 It has long been generally regarded, and properly so, to be in everyone's best interests if Israel had normal relationships with its regional neighbors. Normal relations are a condition for commerce and mutual prosperity. Normal relations are the stuff of peace rather than of the repeated wars that have been fought between Israel and its Arab neighbors. We rightly applauded Anwar Sadat when he negotiated a peace treaty and established diplomatic relations with Israel, and we rightly criticized other Arab states for ostracizing Egypt itself after Sadat's initiative. Even small instances of Arab ostracism of Israel get criticized today, as when an Egyptian judo athlete refused to shake his Israeli opponent's hand after a match at the Olympics.

Israel could have had full and normal relations with its Arab neighbors long ago. Many years have passed since most Arab government in effect accepted Zionism. A peace initiative by the Arab League, offering full normalization of Arab relations with Israel in return for an end to the Israeli occupation of Palestinian territory and a “just settlement” of the Palestinian refugee issue, has been on the table since 2002. The Arab governments later reaffirmed the offer and indicated additional flexibility regarding the acceptability of land swaps when drawing a final boundary between Israel and a Palestinian state. Israeli leaders, despite saying some favorable things about the initiative, have in effect ignored it, preferring to cling to all of the conquered Palestinian territory with a continued occupation. But although these have been the Israeli priorities, the possibility of full and normal relations with the neighbors has at least been out there as a potential carrot, to add to whatever other incentives there might be for Israel to get off its destructive path of indefinite occupation.

More recently, as an editorial in the New York Times observes, there has been de facto development of ties, in the absence of full diplomatic relations, between Israel and some Sunni Arab states, especially Saudi Arabia and the United Arab Emirates. There also has been a warming of relations with Egypt, a relationship that had mostly been a cold peace since Sadat's time. As the editorial correctly notes, such developments reflect how the political status of the Palestinians is not a top priority for most Arab governments, and indeed it has long had to compete with more parochial concerns of those governments. But the plight of their Palestinian brethren still is a salient issue for most Arabs, as is the status of holy places that are among the issues that would have to be resolved in any Israeli-Palestinian final agreement. The principal author of the Arab League peace initiative, the late Saudi King Abdullah, made clear that he was especially interested in the status of the Muslim holy places in Jerusalem and was willing to accept whatever resolution of other issues was acceptable to the Palestinians themselves.

The kind of de facto and semi-secret relationships that have been developing are the wrong kind of Israeli-Arab relations. They are not in the best interests of the United States or of anyone else. Far from being a basis for peace and prosperity, they are themselves based on conflict, regional divisions, authoritarianism, and the threat or use of force. With regard to Egypt, the warming of ties with the regime of strongman Abdel Fattah el-Sisi has to do with el-Sisi's harsh internal crackdown and especially his bashing of the Muslim Brotherhood, which is related to his willingness to cooperate with Israel in bashing the Brotherhood's Hamas cousins in the Gaza Strip. With regard to the Gulf Arab monarchies, the dealings with Israel have to do with the determination of those regimes to expand their regional influence and to pursue their rivalry with Iran. That determination has become so strong in the Saudi case that it has led to the reckless aerial assault and consequent humanitarian disaster in Yemen—a situation that has gotten so bad that a bipartisan group of U.S. congressmen is urging the Obama administration to delay a major sale of arms to the Saudis.

In short, the recently developing Israeli ties with these authoritarian Sunni Arab regimes are a matter of more regional conflict and instability, not more peace and prosperity.

Two comments about current Israeli incentives follow. One is that there is even less interest than before (if that is possible) on the part of the Netanyahu government in taking up the Arab League initiative or taking any other steps toward making peace with the Palestinians. If Israel is at least partially shaking off its regional isolation while still clinging to all the occupied territory and not even making a move toward relinquishing it, than the determination of that government to live forever by the sword is only strengthened.

These developments also underscore the Israeli government's incentive to stoke conflict with, and fear of, Iran as much as possible. It was the Israeli government's interest in keeping Iran as a perpetual bugbear that underlay its posture toward the nuclear agreement with Iran—a posture that never made sense as far as the nuclear issue itself was concerned, given that the agreement severely restricts and monitors the very nuclear program about which the Israeli government had been sounding so many cries of alarm. The scaremongering about Iran serves not only as a distraction from Israeli-relevant issues and a rationale for extraordinary U.S.-Israeli ties, but also as the basis for isolation-breaking relations with the Gulf Arabs.

So the prospects for any progress toward an Israeli-Palestinian peace are as dim as they have been in a good while. The right-wing Israeli government is not feeling pressure to get off its destructive path. On the Palestinian side, it is not a matter of, as the Times editorial incorrectly suggests, the Palestinians having no more “interest in serious peace talks” than Israel does. Very few Palestinians want to live under the Israeli occupation, and the great majority of Palestinians recognize that serious peace talks are needed for the occupation to end. But the only tolerated Palestinian interlocutor, the Palestinian Authority, has become a sclerotic auxiliary to the occupation and has long passed its “best if used by” date. Credible secular alternatives languish in Israeli jails. (Marwan Barghouti, call your office, if you can.) The Hamas alternative, which seems poised to win municipal elections in the West Bank in October, will no doubt be the target of the same Israeli rejection of popular sovereignty that it has been when winning free elections in the past.

The gloomy prognosis is not an excuse to avoid the issue. The plight of the Palestinians is partly a matter of denial of basic human and political rights. It also has been, as the editorial correctly notes, “a source of regional tension for decades”.

Image: A road sign in Israel. Photo by Justin McIntosh, CC BY 2.0.