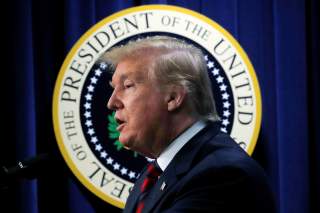 The assassination of Iranian Maj. Gen. Qassim Suleimani, and the rationales offered for this killing, exhibit extreme myopia no matter where one looks in space and time.

Looking forward, there is no evidence that President Donald Trump’s ordering of the assassination was guided by any appreciation for the ill consequences that would follow, including the recent Iranian retaliation. The administration’s assertions that Americans are now safer are belied by the administration’s own travel advisories and other tacit admissions that Americans are decidedly less safe than they were a week ago. Suggestions that the assassination was intended to pre-empt an imminent Iranian attack—for which the administration has offered no public evidence—are belied by ample indications that the operation was in preparation for some time.

Besides, Suleimani was not the triggerman for any plot that did exist, and killing such a senior leader does not pre-empt anything. Far from the assassination having, as Trump put it, “stopped for good” whatever the Iranians may have been planning, it hardly dents the ability of the Iranian Quds Force, with its deep bench, to operate.

Look backward, too. In any escalatory spiral, such as the one in which the United States and Iran are ensnared, the natural tendency is to focus on whatever is the most recent destructive act by the other side and to argue for another tit in response to the other side’s latest tat. Without the myopia, it is clear what caused the whole spiral in the first place: the Trump administration’s reneging in 2018 on the multilateral agreement that restricted Iran’s nuclear program—despite Iran’s full compliance with that agreement—and the administration’s escalation into unrestricted economic warfare against Iran. Before that departure, Iran was not attacking tankers and Saudi oil facilities, militias in Iraq were not engaging in clashes with U.S. forces, and there was no spiral.

That the administration’s reneging and its “maximum pressure” campaign would lead to nothing positive and instead would lead only to escalation, crisis, and the risk of open war was entirely predictable and indeed was predicted. Responsibility for what ensues as part of the current spiral rests squarely with Donald Trump and those, such as Secretary of State Mike Pompeo, who have urged him onto such a destructive path.

That responsibility is not relieved by observations that Suleimani “had blood on his hands” or was “responsible for the death of Americans.” Iranian actions, like the actions of other states, do not take place in a vacuum. Most of those American deaths occurred in a war of choice that the United States launched in Iran’s neighbor Iraq and that triggered both a sectarian civil war and an insurgency against an occupying power. Moreover, applying the bloodied-hands metaphor to a senior military or political leader such as Suleimani, who has ordered or commanded operations amid warfare, opens up one’s own senior military and political leaders to similar rhetorical treatment. How might non-Americans assign responsibility, for example, for the civilian deaths, numbering in the hundreds of thousands, resulting from the offensive war in Iraq that an American president ordered and that U.S. generals commanded?

Beyond the myopia about an immediate destructive past and more destruction yet to come in the immediate future, Americans should reflect on what the assassination of Suleimani (and of a senior Iraqi, in an operation that grossly disregarded Iraqi sovereignty) says about what kind of global citizen the United States has become under Trump. In the past three years, Trump has registered historically low citizenship grades, with behavior ranging from the intentionally destructive, such as crippling international organizations, to the simply boorish, such as shoving heads of government out of the way. But now has come an even more significant and negative departure. The United States had not assassinated foreign leaders, no matter how loathsome they were, for the past half-century—not since the days of exploding cigars intended to kill Cuba’s Fidel Castro and a U.S.-blessed coup in South Vietnam in 1963 that included the assassination of President Ngo Dinh Diem. With the killing of Suleimani, that moratorium has ended.

Apparent exceptions to that moratorium have come within the context of warfare, such as with the opening air salvo of the U.S. war on Iraq in 2003, which included an unsuccessful effort to target Iraqi President Saddam Hussein. But if that is considered a precedent, then it means that Trump, despite all he says about not wanting a new war, has already started a such a war with Iran.

Refraining from assassinating foreign leaders has been a wise American policy, partly to avoid the negative consequences of such killings. The consequences include reprisals by the targeted parties that may be not only in-kind but also take other forms. Moreover, other parties may be encouraged to play the game of nations by such loose and deadly rules. In this regard, it is worth noting that the Russian foreign ministry’s statement about the Suleimani killing included the observation, "We have encountered a new reality—the murder of a representative of the government of a sovereign state, an official in the absence of any legal grounds for these actions."

Killing a leader senior enough to make policy has the further disadvantage of eliminating one of the very people one may need to come to terms with to resolve a conflict. Suleimani was such a leader, given that he was far more than just the commander of the Quds Force and, by some estimates, second only to Supreme Leader Ali Khamenei in shaping Iranian policy in the Persian Gulf and other nearby parts of the Middle East. The one thing now publicly known, via the Iraqi prime minister, about the mission that Suleimani was undertaking when he came to Baghdad on Friday was that he was conveying Iran’s reply to Saudi Arabia’s latest message in an Iraqi-mediated effort to calm cross-Gulf tensions. Everyone should applaud such an effort, in the interest of reducing the chance of war and disruption in the Persian Gulf. By killing Suleimani, Trump has also probably killed, at least for the time being, such peace-making endeavors.

In addition to avoiding the negative practical consequences, foreswearing the assassination of foreign leaders is a matter of principle. It gets to the character and values of a nation, and to the nation’s self-image and self-esteem. Killing other nations’ leaders is not the sort of thing a good nation does. It is the sort of thing terrorists do.

By doing it, Trump has further discredited whatever he says about terrorism. To talk about Suleimani in the same breath as references to slain ISIS chief Aby Bakr al-Baghdadi, as Trump did in his statement following the assassination, grossly misrepresents Suleimani’s role and status. That status is reflected in the huge crowds of Iranians mourning his death. In a recent poll by the University of Maryland, Iranians named Suleimani as the most popular public figure in their country. And as for terrorism, part of the reason for that popularity was Suleimani’s leading role in successfully combating ISIS, which had conducted major operations against Iran.

Openly killing someone with a missile fired from a military drone does not qualify as terrorism according to the official U.S. definition of a terrorist event, which requires it to be perpetrated by either a non-state actor or a clandestine agent of a state. But used for the assassination of a foreign leader, the nature and consequences of the act are the same. The only difference is the available hardware. If Iran had Reaper drones, it no doubt would try to use them to retaliate in kind. But Iran doesn’t have such high-tech aircraft, so its retaliation will use other means that the Trump administration will denounce as terrorism, amid cries to climb another rung on the ladder of escalation that Trump himself created.

If Trump and Pompeo really want to get off that ladder, they need to do more than just say they want de-escalation. They actually need to de-escalate. That means not only backing off from more provocative and deadly kinetic acts; it also means backing off from the economic warfare that started the destructive cycle.

A great nation, as the United States has been throughout its history, sets and observes high standards of international behavior. It does so confident that its strength and character will enable it to protect and advance its interests effectively without stooping to lower standards and doing the sorts of things that rogue states and terrorists do. By acting like a rogue, Trump has diminished America’s greatness.