The MEK and the Bankrupt U.S. Policy on Iran 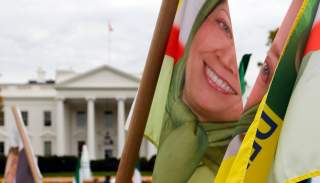 Among the many indicators of misdirection in the Trump administration’s policy toward Iran, one of the clearest is the fondness for the cult-cum-terrorist group known as the Mujahedin-e Khalq, or MEK. The national security advisor, John Bolton, and Donald Trump’s attorney, Rudy Giuliani, are among the group’s most prominent cheerleaders, having been featured speakers at its rallies. They and other shills for the MEK refer to the group as if it represented what it decidedly is not: a democratic alternative to the current Iranian political system.

Journalist Arron Merat, an experienced Iran-watcher who formerly was the Economist’s Tehran correspondent, has just published a 6,600-word article about the MEK in the Guardian. The piece is well worth reading as it forms a richly informed and up-to-date portrait that leaves no doubt about the nature of the group and the ghastly inappropriateness of using the MEK in any way as a vehicle for U.S. policy in the region.

The MEK originated as a student movement that opposed the Shah of Iran and spouted an ideology that weirdly combined Islamism and Marxism. The group was virulently anti-American from the beginning. Its terrorist operations targeted American-owned businesses, and it killed six American citizens in addition to its far more numerous Iranian victims. The MEK was a major player in toppling the shah in the 1979 revolution but soon had a falling out with the new Khomeini regime—among other things, the group opposed the regime’s release of the American hostages held at the U.S. embassy. The group continued its terrorism, with the only difference being that the Islamic Republic had replaced the shah’s regime as a principal target.

With the eight-year Iran-Iraq War already underway, the MEK threw in its lot with Saddam Hussein. The Iraqi dictator gave the group weapons, cash, and a compound called Camp Ashraf in return for its continuing attacks inside Iran as well as helping Saddam suppress his own domestic opponents. Iranians understandably viewed this phase in the MEK’s history as an unforgivable act of treason, and whatever support the group previously had in Iran was erased.

Merat’s article provides details of the cult-like aspects of how the MEK has functioned, earlier at Camp Ashraf and more recently, after the group had to leave Iraq, at a compound in Albania. As cult leaders, the husband-and-wife duo of Massoud and Maryam Rajavi have resembled the likes of Jim Jones and Shoko Asahara. Families have been broken up, married couples told to divorce, and women threatened with punishment if they did not “marry” Massoud and endure his sexual abuse. (Massoud dropped out of sight after the U.S. invasion of Iraq, and it is not known whether he is dead or alive. Maryam continues as the public face of the group.) Stomach-turning details continue to emerge from the MEK’s current location in Albania, including stories of forced hysterectomies and would-be escapees subjected to solitary confinement. The former head of Albanian military intelligence says that MEK members live in the group’s current compound as “hostages” amid “extraordinary psychological violence and threats of murder.”

The MEK’s efforts over the past two decades to convey a benign public image completely at odds with this internal reality, and to pose as a force for democracy in Iran, have depended on buying the public endorsements of well-known public figures. This has required money—lots of it. Five-figure speaking fees have flowed freely. Public disclosure forms indicate Bolton received $40,000 for a single appearance at an MEK event in Paris last year, and Merat gives an estimate of $180,000 as the total that Bolton has received for his multiple appearances on behalf of the group.

In addition to the generous big-name fees, lobbying for the MEK has apparently included other well-financed techniques. The crowd at the Paris event, for example, was supplemented by bussing in young people from Eastern Europe who enjoyed a free weekend in Paris. The group used the same rent-a-crowd technique for a demonstration outside the State Department when the MEK was ramping up its lobbying a few years ago to be delisted as a foreign terrorist organization. Some of the participants in that event were recruited at a homeless shelter in New York; they admitted knowing very little about the MEK but appreciated the free meals they were given for attending.

Where the money is coming from is still somewhat of a mystery. But some clues point to governments that are regional rivals of Iran as the most likely source.

Two further observations flow from this surprisingly successful but wholly unjustified remaking of the MEK’s image. One concerns how some famous—and perhaps otherwise respectable people—evidently have been willing to prostitute themselves to get in on those fat speaking fees. A wide range of political figures have played the game, from Howard Dean on the left to Bolton and many others on the right. Some of the players may have had little more understanding of the MEK when they got involved then did the guys from the homeless shelter in New York. Ed Rendell, a former Democratic governor of Pennsylvania, freely admitted that he knew little about the group when he accepted an invitation to speak at an event the MEK staged at a downtown Washington hotel. He then told his audience—in a demonstration of the self-sustaining nature of big-name endorsements—that the reputations of the other speakers at the same event persuaded him that it must be for a worthwhile cause.

Not everyone has succumbed to the monetary temptations. Tip your hat, for example, to Elliott Abrams, a card-carrying neoconservative who has had more than his share of misdirection in Middle East policy, for declining an invitation to speak at an MEK event. Abrams cited the fact that the group was still on the foreign terrorist organization list at the time, but the politically and morally inexcusable nature of advocating for such a group does not depend on such a formal list.

The other observation is that, while the shills have taken their fees to the bank, the fact that a group as dubious as the MEK figures so prominently in the administration’s policy on Iran demonstrates the bankruptcy of that policy. If the MEK is in the game, then we know the game is not about democracy, human rights, or doing right by ordinary Iranians. Bolton and at least some of the others who have touted the group are surely smart enough to realize that and to understand the true nature of the group. They appear to be less interested in democracy in Iran than in the capability for sabotage, destruction, and assassination in Iran—a capability that the MEK still has despite its claims to have forsaken violence.

Fostering that capability may serve the objectives of regional rivals who do their own sabotage, destruction, and assassination aimed against Iran and welcome the augmentation of their capabilities for mayhem that the MEK offers. It certainly does not serve the interests of the United States. It instead increases instability in—and thus around—Iran, strengthens the market for hardline views in Iran, and besmirches the reputation of the United States through associating itself with the MEK.