The Middle East Non-Peace Accords and Non-Cooperation on Russia 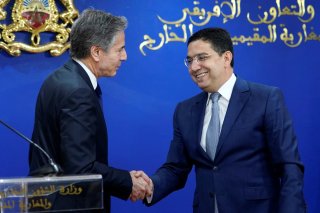 Secretary of State Antony Blinken’s appeal, at a ministerial-level meeting in Israel of several Middle Eastern countries, for greater cooperation in standing up to Russia’s aggression against Ukraine—and his apparent lack of success in getting such cooperation—raise additional questions about the Biden administration’s embrace of a move that its predecessor had engineered. That move was the upgrading, to include full diplomatic recognition, of relations between Israel and three Arab countries: Bahrain, Morocco, and the United Arab Emirates. The upgrading was carried out with much fanfare and given the grandiose name of the “Abraham Accords,” as if it represented a coming together of the world’s monotheistic religions, which it doesn’t.

The just-concluded meeting in the Negev was full of smiles and self-congratulatory words about how wonderful it was that Israelis and Arabs were meeting together, but Blinken evidently came up empty on the issue of Russia and the war in Ukraine. There was no indication of movement away from the especially uncooperative postures of Israel and the UAE. This outcome was one more indication that the upgrading of the relations between Israel and these Arab regimes bought nothing for U.S. interests.

Full, normal relations between Israel and other Middle Eastern states certainly are to be applauded insofar as they reflect the resolution of conflicts and a furthering of peace in the region. But that’s not what this upgrading was ever about. The Arab states involved were not at war with Israel and already had extensive relationships with Israel on many matters, such as the sharing of spyware to be used against dissidents, even if the relationships had stopped short of a full exchange of embassies.

Far from promoting peace, the move reduced the chances of achieving peace or of lowering tensions in different parts of the Middle East. One such part is the Persian Gulf. The upgrading of relations reflects an anti-Iran military alliance, which sharpens lines of conflict across the Gulf.

Another part is Israel’s conflict with the Palestinians, who by definition would need to be directly involved in any resolution of that conflict. The “Abraham Accords” are instead all about excluding the Palestinians. Successive Israeli governments have savored the have-your-cake-and-eat-it benefit of enjoying expanded relations with Arab states while still occupying Palestinian territory and expanding Israeli settlements there. This benefit has further reduced whatever incentive there may have been on Israel’s part to resolve the conflict with the Palestinians.

The Israeli government’s preferences explain the domestic political considerations underlying the Trump administration’s actions on this subject. The same political considerations no doubt explain much of the Biden administration’s posture. Perhaps Blinken saw the meeting in Israel as a convenient opportunity to lobby the foreign ministers of several states at once on the Russia/Ukraine issue. But this is by no means the first occasion on which he and other administration officials have lavished praise on the “Abraham Accords.”

That praise fails to mention how the Trump administration had to buy the upgrading of relations by providing extra incentives to the Arab states involved—the need for which underscored how this whole affair was not really a resolution of conflict. Some of those incentives tend to exacerbate tension and conflict. The sweetener for the UAE involved the sale of F-35 fighter jets, which furthers an arms race in the Persian Gulf. With Morocco, the price was the Trump administration breaking from an international consensus and abandoning decades of a U.S. policy of neutrality toward the Western Sahara dispute by recognizing Moroccan sovereignty over the territory. That move contributed to a heating up of the conflict and an increase in tensions between Morocco and Algeria.

U.S. interests are served by genuine promotion of peace and reduction of tension in the Middle East—for multiple reasons, including avoiding association with condemnable political violence, lowering the risk of being dragged into local conflicts, and reducing the drain on U.S. policy attention and resources. Peace in Palestine requires including, rather than end-running, the Palestinians. Reducing tensions in the Persian Gulf requires détente between participants in the regional rivalries there, in which the most important participants are Saudi Arabia and Iran. The upgrade of Gulf state relations with Israel does nothing to promote such détente. It may even have the opposite effect if it increases the impact of the Israeli government’s policy of promoting maximum unending enmity toward Iran.

Meanwhile, the United States reduces its leverage, as it seeks cooperation from Middle Eastern governments regarding the war in Ukraine or on any other issue, insofar as it appears to automatically take one side in local rivalries and conflicts. It would stand a better chance of getting the cooperation it wants if its support for the locals is earned rather than taken for granted.