The Mischaracterization of the War in Yemen 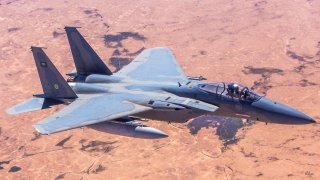 The war in Yemen is a leading example of a local conflict getting perceived through a lens colored by other agendas and concerns, much to the detriment of understanding and resolving the conflict itself. Yemen often gets discussed as a front in an aggressive campaign by an Iran-led axis to expand influence throughout the Middle East, resisted by a Saudi-led coalition that has the favor of most commentators because it is seen as allied with Israel and the United States. This mistaken way of looking at the war will only prolong the suffering of Yemenis while doing nothing to lessen tensions elsewhere in the region.

The roots of the current Yemeni war are local and parochial and have nothing to do with broader axes or confrontations in the Middle East. The Houthi movement that constitutes one side of the war has championed the interests of the Zaidis of northern Yemen, whose religion is a branch of Shiism—distinct from the Twelver Shiism found in Iran—and who constitute about 35 percent of the population of Yemen. The Zaidis used to enjoy a lot of power in their corner of the neighborhood; a Zaidi imam was king of what used to be North Yemen until the monarchy was terminated by an earlier civil war.

In later years, Zaidis chafed under the rule of Sunni regimes. They felt their religious faith threatened both by state-funded Salafist preachers who moved into their part of Yemen and by similar religious influences percolating across the border from Wahhabi-dominated Saudi Arabia. Added to the religious and cultural frictions were economic grievances over such things as food subsidies and meager development assistance for Zaidi-inhabited areas—issues that helped to spark the revolt that grew into the current war.

Emblematic of how much this war has been a matter of local and personal maneuvering—and not of larger confrontations on which an outside power like the United States ought to take sides—was the role of Ali Abdullah Saleh, who was president of North Yemen and then a united Yemen for over three decades and was often regarded as Washington’s man. After months of mass protests against his corrupt regime during the peak of Arab Spring consciousness, Saleh was forced out in 2011 and replaced by his deputy, Abd Rabbuh Mansour al Hadi. Saleh had overseen many of the policies that offended the Zaidis, but after the Houthis’ offensive got rolling, he allied with them. Military units organized by Saleh’s family facilitated the Houthis’ capture of the capital city Sanaa. A couple of years later in 2017, in a move evidently orchestrated by the UAE in consultation with the Saudis, Saleh announced he was breaking his alliance with the Houthis. Soon afterward he was killed while trying to flee to Saudi-dominated territory.

Saudi Intervention and the Response

What turned a civil war into a cockpit of foreign involvement was the large-scale intervention by Saudi Arabia beginning in 2015. This was not the first time the Saudis intervened in a Yemeni war. In a civil war in the 1960s started by a republican revolt against that Zaidi king, Saudi Arabia took the “royalist” side in aiding the Zaidis, while Egypt under Gamal Abdel Nasser was the principal intervenor on the republican side. The Saudis obviously were partly motivated then by a desire to put down a challenge to a monarchy. But a continuing motivation has been their opposition to any regime in this corner of the Arabian Peninsula that has an independent streak and is not allied to Riyadh.

The air war that Saudi Arabia has sustained since 2015 has been the biggest escalatory step in the conflict and the greatest cause of the casualties and destruction that have turned Yemen into a humanitarian disaster. The Saudis have even declared an entire governorate to be a military target, which, as the watchdog organization Human Rights Watch points out, is a clear violation of the laws of war in indiscriminately targeting civilian residents.

Yemeni deaths from all causes associated with the war, according to a United Nations report, totaled about 377,000 as of the end of 2021. The refugee arm of the United Nations estimates that over 4 million Yemenis have been internally displaced.

When anyone gets hit as hard as the Yemenis in Houthi-controlled areas have been hit by Saudi Arabia and its allies, the natural and unsurprising response is to try to strike back. Thus, the Houthis have tried to use what capabilities they have, employing missiles and drones, to do just that, against Saudi Arabia and its ally the UAE—which, despite its earlier announced withdrawal of most of its forces, is still very much involved in the Yemeni war.

The damage and casualties such Houthi retaliatory strikes have inflicted do not even reach the level of a rounding error when compared to the death and destruction inflicted in the other direction. An apparent Houthi drone attack in Abu Dhabi earlier this month, for example, destroyed several fuel tankers and killed three people.

Press coverage and policy discussion nevertheless tend to focus much more on Houthi attacks than on the immensely larger destruction in the opposite direction. Probably one reason is that what takes place at an airport or oil facility in Saudi Arabia or the Emirates is more visible to Western eyes than any carnage occurring in remote governorates in northern Yemen. Another reason is the conceptual framework according to which the Houthis are regarded as bad guys in a region-wide struggle against supposed good guys—a fanciful tableau constructed around the usual obsession over Iran.

Iran has indeed provided material aid to the Houthis. The chief Iranian motivation (besides probably some sympathy for beleaguered fellow Shiites) is to make regional rival Saudi Arabia bleed as long as the Saudis insist on intervening in force in Yemen—at least until and unless there is a deeper detente between Tehran and Riyadh, which Iran has long said it would welcome.

The Houthis and Iran

The colored-lens perspective mistakenly views almost anything the Houthis do as reflecting an Iranian hand. Such a view ignores the nature of the Yemeni war and what the Houthis have accomplished on their own over several years. It also ignores Occam’s razor, in which the simple explanation for the Houthis launching drones against the Saudis or Emiratis is that they want to strike back against the people that have struck them. Supposed multi-national networks for expanding regional influence to be used for conjectural future purposes would be a far more complicated explanation. Of course, in striking back, the Houthis will use whatever materiel is available to them, whether some of it originated in Iran or not.

Probably the biggest step the Houthis have taken in this war—the capture of the capital city of Sanaa—they reportedly took against the advice of Iran. Contrast that with the actions of Washington’s former friend Saleh, who aided the Houthi takeover of the capital.

The Iran connection continues to drive policy recommendations that seem to say that pressure on the Houthis is the most important response for the United States to take to this war. Some Republican senators as well as others argue, for example, that the Houthis should be placed on the U.S. list of Foreign Terrorist Organizations. Such a move—besides being yet another misuse of this list—would accomplish absolutely nothing in Yemen except making it more difficult to get humanitarian aid to areas that badly need it. The Houthis are seized with a struggle over the political order in Yemen and have no interest in international terrorism, at least as long as it is not connected with foreign interventions in that struggle. And if retaliatory attacks in countries that were the origin of attacks against one’s own interests were to be interpreted as international terrorism, the United States had better be mindful of how such an interpretation would apply to some of its own past operations.

Given the nature and source of most of the violence and suffering in this tragic war, the single most important pressure point is Saudi Arabia. President Joe Biden has partially recognized this by announcing early in his administration that the United States would no longer provide direct support to the Saudi air war and instead would only provide the Saudis with “defensive” equipment. This changed the policy of the Trump administration, which under pressure ended refueling for the Saudi bombing missions but continued intelligence and logistical support for the Saudi war in Yemen.

Despite the announcement, however, American commercial contractors continue providing maintenance and other indirect support that helps to sustain Saudi air force capabilities, including those used in the assault in Yemen. Moreover, even “defensive” weapons figure into Riyadh’s overall calculus. To the extent any fear of Houthi retaliation gets nullified by Saudi defensive capabilities, Saudi ruler Mohammed bin Salman is apt to feel more uninhibited in continuing the bombardment. The leverage that U.S. military aid to Saudi Arabia—which currently includes $126 billion in active government-to-government military sales cases—could provide should be used much more than it is now to push the crown prince’s calculus in a less belligerent direction.