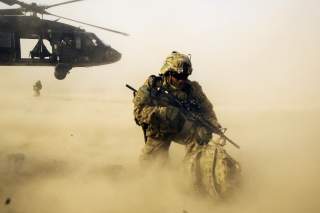 The Washington Post has given huge play—multiple A-Section pages over several days, despite the competition for space from impeachment news—to a series about the war in Afghanistan, based on official interview records that the Washington Post obtained through a Freedom of Information Act request. Journalists and the newspapers that employ them like to portray such featured products as revelations—as bringing to light facts that, without journalistic digging, would have remained hidden. But the government office that conducted the interviews, known as the Special Inspector General for Afghanistan Reconstruction (SIGAR), is not in the business of hiding facts.

Established by an act of Congress in 2008, SIGAR operates openly and has published a long list of reports during its decade of existence. The Washington Post reporters took the interview transcripts and records that formed the basis of some of those reports and have highlighted some of the comments in them, along with the names of some interviewees that SIGAR had protected because the interviews were conducted on a non-attribution basis. The newspaper’s addition to the work the government had already done is best described not as a revelation but rather as an embellishment and a reformulation for the benefit of impatient lay readers.

The Washington Post nonetheless has described its series as uncovering lies and hidden truths. The title of the first installment is “At War With the Truth,” the opening sentence of which declares that the collection of documents the reporters mined “reveals that senior U.S. officials failed to tell the truth about the war in Afghanistan throughout the 18-year campaign, making rosy pronouncements they knew to be false and hiding unmistakable evidence the war had become unwinnable.”

Certainly, the war in Afghanistan has featured many optimistic official forecasts that, with the passage of time, can be seen to have been over-optimistic. Unquestionably there has been puffery for public consumption that was not entirely consistent with more sober appraisals conducted behind closed doors—a pattern hardly unique to warfare. But the many troubles of the U.S. expedition in Afghanistan, as documented by SIGAR and now the Washington Post, have not primarily been matters of political leaders or government officials lying and concealing facts. Lies and deception were not the reason the United States intervened militarily in Afghanistan or why the expedition has now become America’s longest war.

The United States intervened in Afghanistan and has stayed mired there for reasons rooted in broader fears and political pressures. There was no question that after the national trauma of 9/11, U.S. forces would enter Afghanistan to root out the responsible group, Al Qaeda, from the home it had established there. An off-ramp should have been found after the rooting out of Al Qaeda and the ouster from power of its Taliban hosts, but for multiple U.S. administrations it has been politically difficult to find that off-ramp. An underlying fear has been the political repercussions, if the United States withdrew from Afghanistan, that would follow any future terrorist attack on the United States that had an Afghan connection and inevitably would be blamed on the withdrawal.

Similar observations concerning the relative roles of lies and larger political dynamics could be made about other misbegotten U.S. wars of the past half-century. These include the Vietnam War, which the Washington Post evokes by likening its product (the “Afghanistan Papers”) to the Pentagon Papers, the Department of Defense’s classified history of the first part of the Vietnam War. Yes, the makers of that war indulged in deception, as in portraying the Gulf of Tonkin incident in 1964 as an open-ocean attack by North Vietnam, and later in manipulating enemy troop strength numbers to make it look like a tipping point had been reached in attrition of Communist forces. But the United States would have fought the Vietnam War even without those tricks. The story in the Pentagon Papers is less one of such legerdemain than it is of policymakers who—however pessimistic they were about achieving something that could be described as a “win” in Vietnam—believed they nonetheless had to make the effort to preserve U.S. credibility and avoid having other Asian countries fall to Communism like a row of dominoes.

However mistaken such beliefs may appear today, they were widely shared in the 1960s, including among leading American journalists. David Halberstam, whose 1969 book The Best and the Brightest described how smart people could get involved in a stupid conflict, had written in an earlier book in 1965—just as the U.S. ground war in Vietnam was getting underway—that a withdrawal from Vietnam would mean “that the United States’s prestige will be lowered throughout the world, and it means that the pressure of Communism on the rest of Southeast Asia will intensify.” Halberstam said that Vietnam was “perhaps one of only five or six nations in the world that is truly vital to U.S. interests.”

Another New York Times reporter, Neil Sheehan, who would be the conduit for the leaked Pentagon Papers and would win praise for his critical coverage of the war, including in his later book A Bright Shining Lie, expressed similar views at the outset of the war. In a long analytical piece in the Times in August 1964, he wrote of the need “to demonstrate to the rest of the world that this country has the desire and the ability to defeat the Communist strategy for expansion.” Sheehan elaborated on the domino theory and declared that an American defeat in Vietnam “would amount to a strategic disaster of the first magnitude.”

The views of the press, the public, and American politicians about Vietnam changed greatly in the space of about three years because the war went sour and ran up enormous costs with little to show for it. The views did not change because of some concealed truth that got revealed. The Pentagon Papers are a wonderful resource for historians and policy analysts, but their publication did not change the course of the war. When they leaked in 1971, the Nixon administration was already two years into its drawdown of U.S. forces.

The Iraq War of 2003 had a more contrived rationale than the Vietnam War and was initially driven by a narrower base of support in the form of neoconservatives whose agenda had long included a forceful overthrow of the Iraqi regime. The war-makers’ mythical “alliance” between the Iraqi regime and Al Qaeda was thoroughly fallacious and—unlike the other major war-selling theme, involving weapons of mass destruction—contrary to the judgments of the U.S. intelligence community. But even on the contrived theme of terrorist connections, the administration’s war-selling campaign depended less on specific lies than on a vaguer rhetorical drumbeat that constantly associated Iraq with 9/11 and thereby capitalized on the American public’s militant post–9/11 mood.

Supported by such rhetoric, the launching of the Iraq War had support far broader than its original neoconservative promoters. In the post–9/11 atmosphere, Republicans and many Democrats had their own separate political reasons for backing the war, which I have analyzed at greater length elsewhere. And as with the Vietnam War, where support dissipated over time and not because of some juicy revelation of a concealed truth but instead because the war went sour, with high costs and little accomplishment.

Once again, journalists were part of this broader up-and-down wave of public sentiment. After wars have gone sour and support has dropped, the reflexive journalistic reaction seems to be to assume there must have been some secrets that, had they been revealed earlier, would have precluded the whole mess. Former Washington Post columnist Richard Cohen wrote such a pro-leak piece in February 2006 that complained of intelligence officers who had “kept their mouths shut” about the Bush administration’s misuse of intelligence. I figured prominently in the column as someone who, if only I had picked up the phone and leaked something to a reporter, supposedly might have changed history.

It was a mystery to me what I might have leaked had I been so inclined, but Cohen’s hypothesis is especially interesting in view of a column he had published three years earlier, a week before the invasion of Iraq. Cohen wrote then, “In the run-up to this war, the Bush administration has slipped, stumbled and fallen on its face. It has advanced untenable, unproven arguments. It has oscillated from disarmament to regime change to bringing democracy to the Arab world. It has linked Hussein to Al Qaeda when no such link has been established. It has warned of an imminent Iraqi nuclear program when it seems, that’s not the case.” Cohen’s description was spot-on. He clearly was not deceived at all by the administration’s pro-war rhetoric, and there was no hidden truth the revelation of which could have changed his perceptions. But he supported the war anyway, arguing that “sometimes peace is no better, especially if all it does is postpone a war.” It was only the costly souring of the war itself that would change his view.

The Washington Post’s series on Afghanistan provides useful material for discussion and contemplation, about this war and about the challenges that similar military interventions are likely to encounter. But to frame the subject as a government’s concealment of truths and dissemination of lies represents a misunderstanding. That framing mistakenly defines the problem as one of government secrecy—naturally a preoccupation of journalists, but not the primary source of bad wars.