The Missing Issue in the Israeli Election 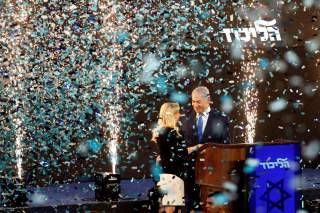 Israelis had plenty to talk about in their recent general election campaign, especially with a long-serving prime minister facing possible indictment for corruption. But Israeli parties and politicians gave relatively little attention to the one topic that most outside observers would rightfully consider the biggest defining issue for Israel: its unresolved, decades-long conflict with the Palestinians. The Associated Press noted that the attention was markedly less than in previous Israeli elections, observing that the campaign “has been heavy on insults and short on substance,” while the conflict with the Palestinians “has been notably absent from the discourse.”

Benjamin Netanyahu’s skill in conjuring up distractions and managing the Palestinian issue in a way that disarms any calls for diplomatic progress had much to do with this absence. So did the overall rightward drift in Israeli politics, with the number of Israelis who now favor some form of annexation of West Bank territory approaching half of the electorate. Those Israeli politicians who would give priority toward resolving differences with the Palestinians—and whose views in that regard would be in the mainstream of world opinion—have come to be regarded in Israel as easily dismissed outliers on the Left.

The campaign focused on positions on other issues taken by politicians whose views on the conflict with the Palestinians are—from that broader viewpoint of world opinion—extreme and destructive. One contender who received much notice in the closing days of the campaign, for example, is a far-right libertarian named Moshe Feiglin, whose party narrowly missed winning enough votes to gain seats in the Knesset. Feiglin has won attention for such ideas as legalizing marijuana and instituting a flat tax. Less noticed are his ideas about building a new Jewish temple on the disputed Temple Mount/Noble Sanctuary holy site in Jerusalem, declaring Israeli sovereignty over the entire West Bank and Gaza Strip, and encouraging Palestinians either to emigrate or to stay as non-citizens swearing allegiance to the Jewish state.

The new Israeli government will be another right-wing coalition led by Netanyahu. But even other feasible outcomes of the election would have had little effect on Israeli policy toward the Palestinians. Netanyahu’s major rival to become the prime minister, former army chief Benny Gantz, has only uttered vague words about “separation” from the Palestinians. The inattention to the conflict with the Palestinians is nonetheless remarkable. It is as if, in apartheid-era South Africa, competing politicians talked more about marijuana and tax rates than about fundamental rights and the relationship between blacks and whites in South Africa.

The tenor of the Israeli campaign shows how comfortable most Jewish Israelis have become with their own country’s version of apartheid. They are walled off, literally as well as figuratively, from the house demolitions, use of lethal force, restrictions on movement, inadequate public services and absence of political rights that define daily Palestinian life under the occupation. Most Jewish Israelis enjoy prosperity, with physical threats to their security having become containable and even minimal (as any look at Israeli and Palestinian casualty figures over the last several years will show). Their government enjoys unconditional backing and cover from the United States—support that the Trump administration has carried to new extremes. Israel is a relatively rich nation (in the top fifth according to GDP per capita, at about the same level as Denmark or Ireland), but it nonetheless receives by far the most U.S. largesse other than war-torn Afghanistan and Iraq ($3.8 billion annually, with no strings attached). And that is in addition to the vigorous efforts to silence anyone critical of Israeli policies who appears to be gaining an audience.

Of all the explanations that have been advanced for the persistence of the Israeli-Palestinian conflict, this Israeli contentment is the most fundamental and the one most consistent with common sense. If one party to a conflict is experiencing comfort and the other is experiencing daily denial of rights as well as denial of anything approaching comfort, it is obvious which side will be okay with prolongation of the status quo and which side will be more anxious to negotiate a replacement for it.

In addition to the gross asymmetry in conditions and motivations, there is the asymmetry in capabilities. The side that has the land and the guns and the control could change the status quo this year if it wanted. The other side clearly is unable to do that.

These truths, as basic as they are, have been obscured by years of spinning history and promoting the idea of Palestinian unwillingness to negotiate a peace. That idea had validity when Israel was born in the 1940s, but it ceased to be valid at least a quarter century ago. Take, for example, the negotiations at Camp David and Taba in 2000–2001, in which, according to a much-heard narrative, Israel generously offered the Palestinians their own state but the Palestinians rejected the offer in favor of a violent response. A careful scholarly look at that episode, such as in a study that Jeremy Pressman undertook several years ago, shows how badly mistaken that narrative is. In Pressman’s words, Israeli prime minister Ehud Barak’s offer at Camp David:

“…neglected several elements essential to any comprehensive settlement, including: the contiguity of the Palestinian state in the West Bank, full sovereignty in Arab parts of East Jerusalem, and a compromise resolution on the right of return of Palestinian refugees. Moreover, despite Israeli contentions, Palestinian negotiators and much of the Palestinian nationalist movement favored a genuine two-state solution and did not seek to destroy Israel either by insisting on the right of return or through the second intifada.”

After the last round of talks at Taba in January 2001, the two sides issued an optimistic communiqué which said: “The sides declare that they have never been closer to reaching an agreement and it is thus our shared belief that the remaining gaps could be bridged with the resumption of negotiations following the Israeli elections.” But the winner of the Israeli election in February 2001, Ariel Sharon, decided not to resume the negotiations. Israeli politics—and not anything the Palestinians did or did not do—ended that chance for peace. Israeli politics in this year’s current election campaign did not even give peace a chance.