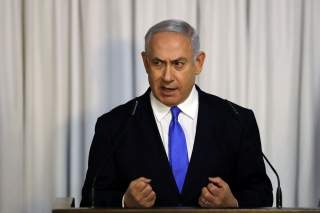 The direct, and still extreme, descendant of a U.S.-listed foreign terrorist organization is in position to become part of the next ruling coalition of Israel, and it has been put in that position at the urging of Prime Minister Benjamin Netanyahu. The organization is Otzma Yehudit, a party whose name is rendered in English as Jewish Power or Jewish Strength. It is the current political vehicle for unreconstructed followers of the late Meir Kahane, the radical Brooklyn-born rabbi and ultra-nationalist.

Netanyahu, facing a challenge for the prime minister’s job in coming elections from former army chief Benny Gantz, has urged two other far-right parties to form a joint list with Otzma Yehudit for elections in April, lest none of the three parties reach the 3.25 percent of the vote required to win seats in the Knesset. In his appeal this week to the party leaders, Netanyahu said, “If you don't unite, you won't pass the electoral threshold, the right-wing bloc will lose and Gantz will form a left-wing government with the support of the Arab parties.” The following day, Otzma Yehudit reached agreement with one of the other two parties, Jewish Home, on a joint list of candidates.

Meir Kahane repeatedly demonstrated his penchant for violent extremism when he still resided in the United States. In 1971 he received a five-year suspended sentence for a bomb-making plot. He later was sentenced to a year in prison for violating the terms of his probation by smuggling arms from Israel and trying to instigate a bombing of the Iraqi embassy.

After relocating to Israel, Kahane founded Kach, a party that competed unsuccessfully in several elections before finally winning a single Knesset seat in 1984. Kahane and his followers meanwhile continued their violent activities, and Kahane was arrested multiple times. After an Egyptian-born gunman assassinated Kahane in New York in 1990, Kach split, with the offshoot group calling itself Kahane Chai (“Kahane Lives”). Both parties have been outlawed in Israel since the mid-1990s on grounds that they are racist, and Kahane Chai is the group that still can be found on the U.S. State Department’s list of foreign terrorist organizations.

The Kahane-associated parties were extreme even for Israeli politics twenty-five years ago, but the continued rightward drift of those politics has permitted a rebirth of the Kahanists. Otzma Yehudit also exemplifies the sort of reincarnation of outlawed parties under a different name that has occurred elsewhere, such as with Islamist parties in Turkey.

There is no doubt that Otzma Yehudit embodies Kahane’s ideas and fondness for his methods. The party calls for annexation of the West Bank, undiluted Israeli rule over all the land between the Mediterranean and the Jordan River, and expulsion of “enemies of Israel” to Arab countries. When the party’s current leader, Michael Ben Ari, was invited to disavow Kahane’s racist ideology, he scoffed at the idea of doing so and said Kahane was his rabbi and his teacher. Ben Ari has argued for the removal of most Arabs from Israel. During the Israeli military attacks on the Gaza Strip in 2012, he said, “There are no innocents in Gaza, don’t let any diplomats who want to look good in the world endanger your lives — mow them down!” Another party leader and former aide to Kahane, Baruch Marzel, has organized parties to celebrate Baruch Goldstein, who in 1994 killed twenty-nine Palestinians praying at Hebron’s Tomb of the Patriarchs.

Former U.S. ambassador to Israel Dan Shapiro has warned that any Kahanists who get elected to the Knesset might not be able to visit the United States because of their precursor organization being on the U.S. list of terrorist organizations. One might also raise the question of whether anyone who boosts the political fortunes of the Kahanists is violating the Antiterrorism and Effective Death Penalty Act of 1996 by providing material support to a terrorist organization.

Netanyahu’s effort to boost right-wing parties over the electoral threshold and thereby help form a majority in the Knesset is, of course, all about the prime minister trying to hang on to power. But the effort also says something about the current political spectrum in Israel. What might have been isolated and dismissed as a fringe twenty-five years ago no longer is. There certainly are critical voices in Israel disparaging the idea of Netanyahu getting into bed with Otzma Yehudit, but the prime minister is a smart politician. He evidently has calculated that whatever he loses from such criticism is more than offset by the prospect of a few extra Knesset seats—ones that could become part of a governing coalition.