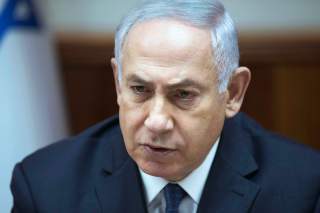 Recently I wrote about the two-sided Saudi policy on Iran, in which Riyadh sees good reason to take quiet steps to reduce tension with its neighbor across the Persian Gulf while still making alarm about a supposed Iranian threat the basis for keeping the United States tied to its side.  But Saudi Arabia (along with its partners in the United Arab Emirates and Bahrain) is not the only party in the region to exploit an anti-Iran theme as a basis for retaining U.S. support, and it certainly is not the most influential one in shaping U.S. policy.  That would be the right-wing government of Israel, which has made relentless excoriation of Iran one of the dominant themes of its public diplomacy.  The Israeli push to keep Iran in the status of an isolated, despised demon with whom nobody should do any business has included opposition to the agreement that limits Iran’s nuclear agreement—even though, as senior Israeli security officials have observed, by closing any route to an Iranian nuclear weapon this agreement is very much in Israel’s security interests.

The Israeli government does not have the same sort of balancing act the Gulf Arabs have in manipulating the Iran issue.  Israel does not live in, or export oil from, the Persian Gulf.  It would not be paying the human and material costs of armed confrontation between Iran and Arabs or between Iran and the United States.  Indeed, warfare in the Persian Gulf would all the more serve the purposes that the promotion of unending hostility toward Iran already serve for the Israeli government of Benjamin Netanyahu.  A clash in the Gulf would foreclose any possibility (already almost nonexistent under Donald Trump) of any further U.S. rapprochement with Iran.  It would thus play to the Israeli line of Israel being the only reliable partner for the United States in the Middle East.  It would weaken a major competitor to Israel for influence in the Middle East.  It would play to the Israeli line that Iran is the font of all trouble and instability in the region.  And it would be a wonderful distraction of the world’s attention from destabilizing matters involving Israel itself.

A background to all this—because this background has become the principal defining characteristic of the Israeli government’s policies and its relationship with the rest of the world—is the half-century-old Israeli occupation of conquered Palestinian territory and the continued denial of political and civil rights to the subject Palestinian population.  This is the topic that, more than any other, commands the attention of Netanyahu’s government in shaping the propaganda that Israelis call hasbara, in batting away complaints from foreign governments and international organizations, and in cultivating distractions to deflect attention from the subject.  This is the topic that, more than any other, underlies the importance to Netanyahu’s government of continued unquestioning U.S. support that includes veto-invoking political cover at the United Nations Security Council and voluminous financial aid transfers free of any conditions or strings involving Israel’s continued colonization of the West Bank.

During this past week we saw an indication of the overriding priority Netanyahu gives to not endangering this automatic U.S. backing, even if this means ignoring other values or concerns that we might otherwise expect to guide him.  The ugly events in Charlottesville elicited shock and outspoken dismay from much of the rest of the world and especially the West about this blatant display of neo-Nazism in America.   A spokesman for German Chancellor Angela Merkel described the events as “sickening”.  But the prime minister of Israel was conspicuously silent.  This is the same prime minister who has been quick to call out anti-Semitism, either real or imagined, in countless other circumstances, and who certainly has shown no hesitation about wading into the domestic politics of the United States.  And yet he had nothing to say about an event featuring chants of “Jews will not replace us” and culminating in a neo-Nazi’s lethal terrorist attack with a vehicle.

The principal and obvious explanation for this non-response is that Netanyahu did not want to take the slightest risk of jeopardizing support from a U.S. president who, in addition to asserting moral equivalence between the racist torch-bearers in Charlottesville and those who demonstrated against them, is notoriously thin-skinned and lashes out at anyone voicing anything that sounds like criticism of him.  Goodness only knows what Netanyahu thinks is in Donald Trump’s heart and what prejudices may or may not lurk there.  But Netanyahu perceives that his government has a good thing going politically with a president who, since midway through the presidential campaign, has pretty much toed the right-wing Israeli line, including backing away from previous administrations’ endorsement of a Palestinian state.  And Netanyahu could not ask for anything more from Trump regarding vituperative, automatic, unending hostility toward Iran and unwillingness to do any business with it or even to talk to its government.

An additional possible explanation for Netanyahu’s non-response flows from the nature of the background condition: an occupation based on ethnic and religious distinctions between a dominant population that is in control and a subjected population that is the one under occupation.  It would not be surprising for members of a political movement centered on such a system to lose sensitivity over time to the dangers of other forms of prejudice and discrimination based on ethnicity or religious identity, including ones with a violent element.  In any case, this is not the first time Netanyahu has appeared to disregard legitimate fears, concerns, and interests of parts of world Jewry, on whose behalf he often claims to speak and act.

Any accounting of Netanyahu’s current priorities must take note of the domestic political fix he is in with multiple charges of corruption against him and his family.  There are reasons to believe he will not be leaving office any time soon.  Whether he does or not, the patterns described above are unlikely to change.  As long as he stays, Netanyahu is dependent on maintaining a coalition in which parts of it are even more extreme than he is on issues involving the occupation.

Meanwhile, Americans ought to be most concerned about compromises with American values, not just Israeli ones.  There is much to be concerned about in how the effort to maintain lockstep U.S. support and cover for Israeli policies has involved that sort of compromise.  This involves not just the Trump administration but the U.S. Congress.  A recent case in point is the reprehensible bill, introduced by Senator Ben Cardin and promoted by the lobby that works on the Israeli government’s behalf, that would subject to criminal penalties any form of support for peaceful economic boycotts authorized by the United Nations or the European Union and aimed at the illegal settlement activities in the occupied territories.

In the wake of the Charlottesville episode, old debates have been rekindled about limits to free speech and how much freedom should be given to hate speech.  There are reasonable and differing positions that can be, and have been, taken on this question in Western countries.  But we ought to be able to agree that it is unacceptable to outlaw speech that has nothing to do with hate speech but instead is only a form of criticism of policies that have themselves been determined by the international community, including the United States, to be illegal.  As we know from the history of the original Nazis whom the extremists at Charlottesville admire, loss of freedom of speech is a signpost on the road to power of movements that are truly hateful and extreme.