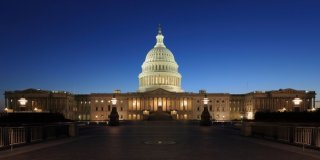 The unrelenting urge among American politicians to keep punishing Iran—or more precisely, to be seen supporting steps with that objective—continues to work against sensible statecraft and U.S. interests in multiple respects. One of those respects concerns how measures taken by the United States affect political competition within Iran.

Here's the current background to questions of U.S. policy toward Iran. The most important development in recent years regarding such policy—the Joint Comprehensive Plan of Action, the formal name for the agreement that limits Iran's nuclear activity—has been in effect for over a year. According to the International Atomic Energy Agency, which does the detailed monitoring of the Iranian program, Iran is fully in compliance with its obligations under the agreement. Those in the United States who have opposed any agreement with Iran all along continue to seek any possible basis for accusing Iran of violations. One of the most recent such accusations concerned some issues of implementation that opponents described as “secret exceptions” granted to Iran. They were in fact not that but rather were typical of the detailed questions that inevitably arise in implementation of any agreement this extensive. A Joint Commission was created under the agreement precisely to resolve such questions, and it has successfully been doing exactly that. The principal real questions of adherence to the agreement involve whether the United States and the West have been fully living up to their obligations regarding sanctions relief and refraining from further steps to damage the Iranian economy.

Despite the record of Iranian compliance, the months since conclusion of the JCPOA have seen a stream of anti-Iran bills introduced in Congress. Examination of most of these bills yields little idea of how if they were to come into effect they would advance any U.S. interests pertinent to Iran, and little evidence of any thought that in this respect went into the writing of the bills. The bills instead seem to be vehicles for members to demonstrate, through their sponsorship or support of such legislation, their anti-Iran credentials.

Typical of these proposals is a recent amendment introduced by Representative Ron DeSantis (R-FL) that would require any issuer of securities, as it registers with the Securities and Exchange Commission, to declare in its registration statement whether it does business in Iran or with any entity organized under the laws of Iran. Although this may sound like an innocent requirement for information, existing law already requires such a disclosure by issuers of securities with regard to any business done with the government of Iran, the Revolutionary Guard Corps, the Iranian central bank, the entire Iranian petroleum industry, and certain other Iranian individuals and entities subject to sanctions. So the DeSantis amendment would only serve to impose the reporting requirement on those dealing with portions of the Iranian private sector that not only have no connection with the Iranian regime but also have given no reason to be sanctioned in the long history of U.S. sanctions legislation directed against Iran. This would discourage commerce with the very sectors in Iran that are most in favor of peaceful engagement with the rest of the world. The legislation would be counterproductive with regard to any political and economic evolution in Iran in a direction favorable to U.S. interests. (The legislation also probably would violate the U.S. obligation under the JCPOA not to take any new steps to prevent Iran from realizing the economic benefits of sanctions relief.)

Another recent example of a backward approach to affecting political competition within Iran is an interview with Dennis Ross of the Washington Institute for New East Policy. Ross, operating squarely within the school of thought that sees nothing good coming out of any business with Tehran and who sees Iran only as an object for confrontation and punishment, focuses on Iran's conduct within the Middle East. As usual with that topic and that school of thought, there are many general references to Iranian “aggression” without considering exactly what Iran is or is not doing in the region and why, say, Iranian assistance to an incumbent regime in Syria is any more “aggressive” than what other powers have been doing to stoke a rebellion and to try to overthrow the regime. And Ross's attempt to square his position that Iran “cannot be a partner in the struggle against ISIS” with the fact that in Iraq, Iran is, just like the United States, not only supporting the incumbent regime but also actively opposing ISIS, seems to come down to an assertion that the Iranians are following narrow (undescribed) policies in Iraq that will leave a lot of angry Sunnis on their Western doorstep but evidently are too stupid to realize that is what they are doing.

For the present purpose note what Ross says about the connection between U.S. actions and political contests within the Iranian regime. He says we should try to decrease the influence of General Soleimani and the Revolutionary Guard, who favor a more “confrontational approach,” relative to the influence of president Rouhani, who favors more of a “normalizing approach.” So far so good. But how is the United States supposed to affect that Iranian political balance? Ross says we should do it by being confrontational ourselves—by “applying pressure”that would “demonstrate the costs to Iran of Soleimani's actions.” When asked what this means in practical terms, Ross mentions military contingency planning with Israel and the Arab states of the Gulf Cooperation Council.

Let's see if we have this straight. We supposedly are all agreed that we would like to see less influence in Tehran for hardliners such as those centered in the Revolutionary Guard. Those hardliners are the ones who, in debate within Iran, argue that doing peaceful business with the United States (as with the JCPOA) does not bring any benefits to Iran, that the United States is determined to use its military might and other power to harm Iran, that Washington will always be acting in cahoots with Iran's regional rivals in Israel and the Gulf Arab states, and that Iran thus has to stand firm and tough against such predatory U.S. behavior in order to protect Iranian interests. So acting in a way that confirms the hardliners' narrative is supposed to reduce their influence in Tehran? The groundlessness of such an argument can be seen with some role reversal. Such confrontation from a foreign adversary tends to strengthen, rather than to weaken, hawkish and hardline sentiment in U.S. politics. It works pretty much the same way in Iranian politics.

The sort of illogicality voiced by Ross has some general roots in American exceptionalism and the notion that the United States should be able to push other states around but that other states don't push the United States around. There is more to it than that, however, where Iran is involved, as suggested by comparing the Iranian case with other cases that offer some parallels. One worth looking at is Burma (a.k.a. Myanmar). President Obama announced this week that the United States is ready to lift economic sanctions on Burma, in light of political reforms there.

This decision is not an obvious call. The Burmese military, which maintained a harsh and closed dictatorship for many years, retains much political power. The former opposition leader and now de facto head of the civilian government, Aung San Suu Kyi, has made many concessions to the military and has become in important respects a partner of the generals rather than a replacement of them. The treatment of ethnic and religious minorities, most conspicuously the Muslim Rohingya community, is still bad. Human rights organizations believe the sanctions are being lifted too soon.

The U.S. administration decided, however, that enough change has taken place in Burma to warrant change in U.S. policy toward Burma. At least as important, the administration determined that further economic and political change in a favorable direction in Burma would be more likely by opening up the country to normal commerce and relations than it would by keeping it isolated.

President Obama's Republican opponents in Congress have, on this issue, taken a constructive and balanced approach. Senate Republican leader Mitch McConnell, who has had a strong interest in Burma, made remarks on the Senate floor that appropriately noted both the progress to date and the significant problems and challenges that remain.

That's a much different approach than McConnell and his colleagues take on Iran, and it is a difference in the approach itself and not just in the two countries involved. If they applied to Burma the same perspective they apply to Iran, what we would be hearing is that moderates in Burma don't matter, that it is nefarious hardliners who still run the show, that gross human rights violations continue, that any relief from sanctions would mean the military-dominated regime would have more resources to do bad things, and that Obama is making a big mistake by lifting sanctions.

Two explanations chiefly account for the difference. One is the objective of denying Mr. Obama any significant foreign policy achievement, consistent with Senator McConnell's earlier declaration that the number one objective of his caucus was to deny the president a second term. The opening to Iran and the JCPOA constitute such a significant achievement; nothing the administration is doing on Burma is of comparable importance.