Palestine and the New Peacemakers 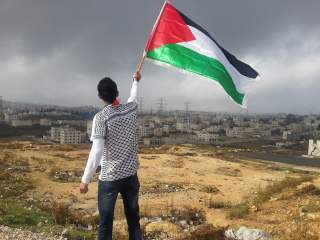 President Trump’s expressed desire to resolve, somehow, the Israeli-Palestinian conflict is welcome, but the grounds for skepticism about this outweigh the reasons for hope.  The principal reason for skepticism is the lack of evidence that Trump has distanced himself politically from the position, embodied in the right-wing Israeli government and its most ardent American supporters, that favors perpetual Israel control of the occupied territories and, despite occasional lip service to the contrary, sees no room for Palestinian self-determination or a Palestinian state.  As a presidential candidate, Trump assumed this position after coming to terms with Sheldon Adelson and adopting AIPAC’s talking points as his own.  As president, this position was manifested in his appointing as ambassador to Israel his bankruptcy lawyer, a hard-right supporter of the Israeli settlement project in the occupied territories.  This week, in a joint appearance at the White House with Palestinian Authority president Mahmoud Abbas, Trump talked in general terms about working together to reach an agreement to live in peace, and in more specific terms about defeating ISIS and security cooperation with Israel, but said nothing at all about Palestinian self-determination or a Palestinian state.

One might also wonder whether this issue will be another one that gets the amateur hour treatment, in which the president comes to admit that, gee, this task is harder than he expected it to be.  With his bankruptcy lawyer having been sent off as ambassador, Trump has turned the Israeli-Palestinian policy portfolio over to his son-in-law and his real estate lawyer.  Of course, given the many years of meager results on this subject when in the hands of supposedly experienced professionals, it might not hurt to see what the amateurs and some fresh eyes might accomplish.  The real estate lawyer, Jason Greenblatt, received favorable marks from both the Israeli and Palestinian sides during a recent listening tour he made to the region.

But with the learning process for this president and this administration starting almost from scratch, Trump’s effort may already be behind the times.  The ground has changed, and changed unfavorably, during all those years of unsuccessful peace processing.  A substantial body of opinion, including opinions of many knowledgeable observers, holds that a two-state solution may already be out of reach.  Other observers hold a different opinion.  It is, of course, the unilateral creation of facts on the ground, in the form of Israeli colonization through settlement construction in the West Bank and East Jerusalem—something else that Trump did not mention in his appearance this week with Abbas—that may have put a two-state solution out of reach.

The meeting with Abbas had, for similar reasons, an obsolete quality.  Yes, the U.S. president must talk with Abbas in any serious attempt to make progress in resolving this conflict.  But Abbas is well past his “best if used by” date.  Events have been passing his part of the Palestinian leadership by, just as they have been passing by any would-be peacemakers whose understanding of the problem is based on where things stood a couple of decades ago.  Abbas has been in his position for several years beyond what was supposed to be his term of office, and in that regard his continued hanging around without benefit of re-election is an affront to the idea of democratic rule for Palestinians.  He has lost much support from the Palestinian populace, a reflection of his failure to make any progress in removing from his people the yoke of Israeli occupation.  Saying this is not to cast aspersion on the character, objectives, or good will of Abbas.  Rather, it is a consequence of the awkward situation thrust upon the strange entity known as the Palestinian Authority, which was supposed to be only a temporary transitional device when established in the early 1990s under the Oslo Accords.  Transition to Palestinian sovereignty never occurred, and many Palestinians subsequently came to see the PA, with good reason, as mainly an auxiliary administrator of the Israeli occupation.

If the Palestinian people are to have a brighter future, it might need to be reached through taking another direction.  We may be seeing a hint of that direction in the current hunger strike among Palestinians imprisoned by Israel.  This protest is led by Marwan Barghouti, whom many have long seen as a more credible and charismatic leader than Abbas or anyone else in the PA.  Barghouti has been described as the Palestinian Mandela; but because there does not seem to be an Israeli de Klerk among those in power in Israel, Barghouti’s stature as the most credible leader of a future Palestinian state is all the more reason for Israelis opposed to creating any such state to keep him securely locked up.  The hunger strike is about conditions in prison, but it sets an example for peaceful, nonviolent protest against debilitating conditions that Israeli control imposes on all Palestinians.  That raises the possibility of a major alternative to a push for a two-state solution: a struggle for equal rights for all in a single state embracing all the territory from the Mediterranean to the Jordan River.

On the subject of alternative leadership to the PA, one also has to mention Hamas, which tries to administer affairs in the Gaza Strip just as the PA tries to do so in portions of the West Bank.  Israel refuses to have any dealings with Hamas (except for negotiations about prisoner swaps), while affixing the terrorist label on Hamas and complaining about its lack of explicit recognition of Israel.  Maintaining the miserable status of Gaza as an open air prison, including a substantial proportion of the Palestinian population while keeping it separate from the rest of Palestine, helps the Israeli government overcome the problem of how to cling to all the other territory that it wants to keep between the Mediterranean and the Jordan River without facing, at least for a while, the prospect of a Jewish minority in a state with an Arab majority.

Hamas’s recent release of a document softening some of its formal positions did not really tell us much new, because the group’s leadership had already made clear that it seeks political power in a Palestinian state on the territory Israel seized in 1967 and that it is quite willing to live alongside, and have an indefinite hudna or peace with, the State of Israel.  If founding charters and lack of explicit recognition really matter, then Hamas’s positions ought not to cause any more problem than the platform of Likud, the dominant party in the ruling Israeli coalition, which explicitly rejects the very concept of a Palestinian state, strongly declares the intention to hang onto all of “Eretz Israel”, and dismisses the PLO—the Palestinian negotiating party at Oslo—as an ”organization of assassins”. And if one is to take the “once a terrorist, always a terrorist” approach, then we should never have had anything to do with former terrorists Menachem Begin and Yitzhak Shamir even after they became prime ministers of Israel.

As for that question of whether a two-state solution is still feasible, perhaps we should not think of one-state and two-states as entirely separate options.  Acting on the former might be what is needed to rescue the latter, and here’s why.  If the prisoners’ hunger strike really were to foreshadow a much broader, and continuing, peaceful campaign on behalf of political and civil rights for all Palestinian Arabs under Israeli control, this would be a deeply discomfiting development for members of the Israeli right wing, and not only because most of them do not want to live in such a fully mixed state (with or without Gaza).  The campaign itself would throw them off balance.  Peaceful protest could not plausibly be dismissed as terrorism.  All the allegedly destabilizing and threatening attributes of a Palestinian state would be irrelevant arguments because a separate Palestinian state would not be what was ostensibly sought. The appropriate role for Abbas and the Palestinian Authority would be to announce the PA’s dissolution, hand the keys to Area A of the West Bank back to Israel, and state the obvious: that nothing is being accomplished by the PA continuing to be a handmaiden to the occupation.  Israel would be confronted, before its own citizens and before the world community, more squarely than ever before with the question of whether it wants democracy or wants apartheid.

This prospect might be disturbing enough for even land-craving Israeli rightists to adjust their ambitions about land and to get serious about negotiating a two-state solution—before the Israeli settlement project gets to a point at which all objective observers would agree that it has put a two-state solution beyond reach.

At least, that’s an optimistic scenario.  A more pessimistic scenario, even if a large peaceful civil rights campaign were to get rolling, is that the Israeli leadership would fall back on its live-by-the-sword instincts and would find ways to use its instruments of violence to upset the peaceful bandwagon.  Because the stoicism of no people is infinite, there would be violence in response on the other side, and we would be back to another round of the same deadly cycle that has gone on for decades.