Political Discipline and a Strategic Void 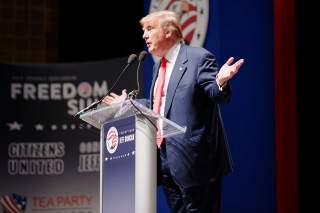 Recent press reports have described the Trump White House shaping its relationships with federal departments and agencies, especially the Department of Defense, in two different directions.  On one hand, the administration reportedly is giving freer rein to the Pentagon to decide on its own about changes in, including expansion of, military operations.  An example of this method of decision was the insertion of Marine artillery and an Army Ranger unit into fighting in northern Syria with no interagency review and no discussion at the level of the National Security Council as to how these deployments did or did not fit into larger U.S. objectives in Syria and what risks the deployments might entail.

On the other hand, the White House has installed a system of political commissars in all departments and agencies.  This arrangement involves individuals who have been inserted into the high-level executive suites of each department but who do not report to the department head or chief of staff and instead answer to a deputy chief of staff in the White House.  Their job is to enforce orthodoxy by monitoring what is said and done in the department, especially by its head, to ensure consistency with White House talking points.

Taken together, these two approaches to managing the executive branch, especially the national security portion of it, embrace the worst ways of executive leadership and omit the best.

Getting away from White House micromanagement of military operations is a laudable goal.  The down-in-the-weeds approach has been used too often, going back to when Lyndon Johnson spent much time selecting individual bombing targets in Vietnam.  Also laudable is any effort to trim the NSC staff, which over the years has ballooned into something much larger than is appropriate for that staff’s proper mission of coordination, as distinct from supplanting departments in what should be their roles in the making and formulation of national security policy.  But the positive effects of such efforts depend on there being a clear strategy at the center.  Reducing micromanagement is good mainly insofar as it frees high-level time and attention for thinking larger thoughts and for planning and conducting a coherent and well-conceived national security strategy.

So far in the Trump administration there has been little indication of such planning and larger thoughts.  Who can say what the administration’s strategy is regarding relations with Russia (even if one were to set aside the unanswered and important questions regarding Russia that currently are being investigated by the FBI and two Congressional committees)?  What is the strategy for dealing with the conflict in Syria, or other conflicts in the Middle East, including the long-running one between Israelis and Palestinians?  And what is the strategy for shaping relations with China, on which the administration’s most noteworthy pronouncements have been head-scratchers such as what the president said about one China versus two, and what the secretary of state said in using Beijing’s preferred vernacular about “mutual respect”?  Like so much else about this presidency, we seem to be stuck in a campaign mode, with themes and applause lines playing a bigger role than strategies and policies.

The commissars do not provide the coordination necessary for sound strategy and policy, or anything close to it.  They are not equipped to do so even if they wanted to; they are mostly political operatives and campaign hangers-on.  Most important, enforcement of political discipline regarding adherence to themes and memes is not at all the same as policy review and coordination.  The main effect on real policy thinking is apt to be the negative one of stifling originality and discouraging frank acknowledgment of failure.

We have seen the debilitating effects of commissar systems in other countries, including the communist ones, where effectiveness in service of the larger national interest was given lower priority than enforcement of political loyalty to the regime, amid a political environment filled with fear and suspicion. The fears, suspicions, and motivations at the top of the regime seem to be similar in Trump’s presidency.  Newt Gingrich, in his capacity as an adviser to Trump, defended the insertion of commissars as necessary to monitor a bureaucracy facing the prospect of meat-ax budget cuts.  “These people”—meaning the bureaucrats, said Gingrich, “are actively trying to undermine the new government.  And they think it’s their moral obligation to do so.”

Meanwhile, the loosening of supervision of military operations in the absence of clear strategy from the top carries other risks. Although it is not good for senior decision-makers to have their time and attention consumed by battlefield details, there can be very consequential devils in details.  These include the ways in which results, especially untoward results, of even a single military operation can have major political ramifications through the infliction of collateral damage and casualties, the sending of unwanted messages to foreign governments and populations, and the risk of escalation.  These are all matters appropriate for review, pre-decision, by more than just the Department of Defense.

Moreover, in the absence of clear strategy and direction from the top, military leaders may in effect, even if not intentionally or consciously, be making the strategy.  Military operations have their own imperatives, especially including force protection, that can lead to larger operations than the political leadership may ever have envisioned in the first place.  On the battlefield, one thing tends to lead to another.  What Vyacheslav Molotov called the “logic of war” may come into play.  Larger military effort required to accomplish one objective may appear to bring within reach bigger objectives.  (Think Douglas MacArthur driving toward the Yalu in the autumn of 1950.)  And in a democracy even more so than in a totalitarian regime, larger objectives may be embraced as a rationale for expending the larger effort.

Maybe the confusion of the first two months of the Trump presidency will shake out into a more orderly way of decision-making, but there is yet no sign that it will.