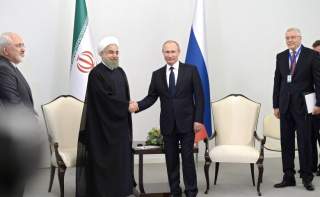 Well, that didn't last long, did it? Barely a week after the announcement that Russian warplanes were using a base in Iran to launch airstrikes in Syria, Iran withdrew its permission to use the base. This development underscores how the Russian use of the base did not indicate some new “alliance”, as much commentary suggested. Iranian officials were not using that term. As I wrote after the announcement, Russians and Iranians were still not buddies. Use of the base was instead an instance of how two countries that are at least as much adversaries as allies nonetheless can find areas of practical cooperation based on parallel interests. Mark Katz provides a good summary of the many troubles in the Russian-Iranian relationship that extend from czarist times through the Soviet era to events of this year.

The Iranians ended the arrangement because the Russians were bragging about it too much and giving the public impression that Russia had gotten its way with the lesser power to its south. Iranian defense minister Hossein Dehghan criticized as “ungentlemanly” the way Russian state-run media were touting the arrangement. “There has been a kind of showing-off and inconsiderate attitude behind the announcement of this news,” said Dehghan. “Naturally, the Russians are keen to show that they are a superpower and an influential country and that they are active in security issues in the region and the world.” So added to the lesson that the Putin government provided of how one can get useful practical cooperation from a non-ally is a further lesson in how such cooperation can be messed up by bungling the public relations in a way that offends the other side's amour-propre.

The Iranians are at least as sensitive about such things as anyone else, with the pride that comes from being the modern successor to a great ancient empire. But the need to save face is universal. Those who do business with those who need to save face must keep such sensitivities in mind. One must decide whether getting material cooperation is more important than bragging rights. Sometimes respecting sensitivities means structuring an agreement so that the other side can claim to be more of a winner than a loser. Sometimes it is more a matter of the public relations surrounding an agreement.

Insensitivity to such matters is easy to find. That's not surprising, given that such insensitivity is in a sense the other side of excessive defensiveness about one's own amour-propre. Being anxious to portray oneself as a winner sometimes gets into demeaning someone else as a loser.

The United States, or at least many Americans who debate its foreign policy, often display such insensitivity. The Iranian defense minister could have been talking about the United States rather than Russia when he spoke of people “keen to show that they are a superpower and an influential country and that they are active in security issues in the region and the world.” Americans would be just as quick as anyone to take offense when it is America's own amour-propre that is at stake. But because the United States really is a superpower, it is more often the offender rather than the offendee in such matters.

Domestic politics tend to exacerbate all of these tendencies. The desire to show domestic audiences that our side got the best of a deal leads to the kind of rhetoric that makes the other side lose face. Something like that is happening with the Obama administration emphasizing how much the Iranian economy is still weakened by sanctions after completion of the agreement that restricts the Iranian nuclear program. One can understand the domestic U.S. political needs involved, but neither the weakening of the Iranian economy nor any crowing about it serves U.S. interests and instead only weakens Iranian inclinations to stick with the agreement.

The Iranians themselves also have shown this kind of insensitivity; remember, such insensitivity can be the other side of high sensitivity about not losing face oneself. Something like this happened with the recent episode involving restitution of funds for undelivered goods going back to the time of the shah. The money involved always belonged to Iran, and under a well-established claims process the United States was required to return the money at some point. If the Obama administration was able to manipulate the timing of the payment in a way that increased the incentive for the Iranian regime to free people who never should have been incarcerated, that was deft diplomacy on the administration's part. Also deft was the administration's handling of the public relations; the transaction was not kept secret, but it was handled in a quiet and routine manner. Nonetheless, some in Iran evidently were so concerned about appearing to have made concessions to the United States to get back money that belonged to Iran that they described the payment as “ransom”—thus providing another instance of Iranian hardliners making common cause, while even using similar vocabulary, with hardline American opponents of the U.S. administration.

One conclusion to bear in mind from all of this is that getting real cooperation that serves our interests is more important than bragging rights, or actual bragging. Another is that we should emulate Putin only when he acts wisely (seizing opportunities for cooperation with non-allies) and should not copy his regime's mistakes (screwing things up with braggadocio).

A third conclusion is suggested by Katz, with specific reference to Iran's withdrawal of the base access privileges: “The ongoing tension in Russian-Iranian relations that this episode highlights could provide an opportunity for American foreign policy to exploit. But for this to happen, Washington would actually have to recognize that the opportunity exists.”