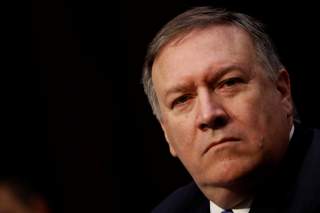 This week John Bolton assumes the job of national security adviser.  Given that a key function of that position is to ensure that the bureaucracy provides the relevant options and most accurate information to the president before major national security decisions, it is hard to think of anyone more ill-suited to that duty.  Bolton's method of policy formation has been to try to bully any part of the bureaucracy that does not subscribe to his personal agenda, and to try to bully away any part of the truth that does not serve his objectives.  Bolton’s objectives are characterized by never meeting a war or prospective war he didn’t like.  He still avows that the Iraq War—with all the costs and chaos it has caused, from thousands of American deaths to the birth of the group that we now know as ISIS—was a good idea.  That someone with this perspective has been entrusted with the job Bolton now has is a glaring example of how there often is no accountability in Washington for gross policy malpractice.

Appointments as national security adviser are not subject to Senate confirmation.  If they were, it would be appropriate for the Senate to react as it did the last time Bolton came before that body as a nominee for a job that does require confirmation.  In 2005 the Senate turned down his nomination to be ambassador to the United Nations.  The Senate review brought to light some of the uglier aspects of Bolton’s conduct in his previous job as an undersecretary of state.  President George W. Bush gave him a recess appointment to the U.N. job, but fortunately that meant there was a time limit to the destruction Bolton could wreak in that position.

The Senate is about to have an opportunity to weigh in on another highly important foreign policy position, that of secretary of state, for which President Trump has nominated Mike Pompeo.  Senators ought to consider that nomination in tandem with the appointment of Bolton as national security adviser, even though the Senate formally has a role with only one of those appointments and not with the other.  Senators should consider the two as a package deal.  They should not vote to confirm Pompeo if they are uncomfortable with either part of the package.

The main reason to approach the Pompeo nomination this way is that the nation currently has a president who, sad to say, needs restraint.  He will need restraint all the more during the coming months as troubles of his own making increase the chance that he will lash out in destructive ways. The copious commentary during the fifteen months of the Trump presidency about having “adults in the room” to restrain the worst urges of an inexperienced and impulsive president speaks to an important truth.  Whether adult supervision of this sort succeeds or fails depends on the collective impact of all of the president’s senior subordinates.  To the extent any one subordinate is especially influential in this regard on foreign policy, it probably is the national security adviser who is best positioned either to accentuate or to restrain Trump’s impulses.  Having Bolton in that job makes the restraining ability of the secretary of state all the more important.

But both Pompeo and Bolton are more likely to accentuate Trump’s impulses than to restrain them.  Bolton got his job because the sort of things he says on Fox are more what Donald Trump likes to hear than the briefings that H.R. McMaster gave him, which evidently were too long for Trump’s taste or for his short attention span.  Pompeo’s winning of favor with Trump, during what reportedly has been lots of face time with him at the White House during the past year, has a similar dynamic.  Pompeo did not rise so quickly from being a relatively junior congressman functioning as a partisan attack dog to where he is now, on the verge of occupying Thomas Jefferson’s chair, by telling Trump what he needs to hear rather than what he wants to hear.

Senators hold up confirmation of nominees, and sometimes vote against them, for all kinds of reasons unrelated to the resumé of the nominee.  It would be proper for them to vote against a nominee for secretary of state partly because of who the national security adviser is, given that both of them are in service to an unstable president.

There are other reasons to consider Pompeo and Bolton in tandem.  In several respects they are two hazardous peas in a pod.  On North Korea, Bolton’s bellicose posture is matched by Pompeo’s statements about seeking ways to "separate" Kim Jong Un from his nuclear weapons, suggesting a priority to regime change over keeping a volatile situation on the Korean peninsula from blowing up.  Both Pompeo and Bolton, along with Trump, have sworn eternal hostility to the Joint Comprehensive Plan of Action (JCPOA), the multilateral agreement that closed all possible paths to an Iranian nuclear weapon.  Neither man bothers to explain how destruction of the agreement, which would free Iran to produce as much fissile material as it wants and would end the intrusive international inspections of the Iranian program, could possibly be in the interests of the United States or of nuclear nonproliferation.

Both Bolton and Pompeo exhibit disturbing indications of Islamophobia.  This is bad enough for an occupant of any high U.S. office.  It would be especially worrisome for someone who is supposed to lead all U.S. diplomacy with the world, a quarter of which is Muslim.

Unlike Bolton, Pompeo won his last confirmation vote in the Senate—for his current job of CIA director.  But he now has a record in that job.  Senators who voted in favor of Pompeo last time would be fully justified in opposing him this time on grounds that he has not conducted himself the way an intelligence chief is supposed to—which is to provide the best and most objective information and analysis free of policy bias.  Pompeo has instead continued to be as ideological and partisan as he was as a congressman.  He has publicly defended Trump, for example, over his reaction to the white supremacists’ rally in Charlottesville, when the president talked about how there were “many sides” of the issues involved and “some good people” participating in the rally.

Pompeo also has been doing Trump’s political spadework in trying to downplay the issue of Russian interference in the 2016 U.S. election.  According to press reports, he made calls on behalf of the White House to news organizations to dispute a New York Times article about contacts between Russians and members of the Trump campaign.  In public comments, Pompeo has contended that what the Russians did in 2016 was no different from what they have done on many other occasions.  That contention is contradicted by the Intelligence Community’s unclassified judgment of January 2017 that the Russian operation in 2016 represented “a significant escalation in directness, level of activity and scope of effort” and that Russia’s objectives went beyond general discrediting of the U.S. democratic process and included trying to help Trump defeat Hillary Clinton.  Last October, Pompeo further mischaracterized the Intelligence Community’s judgments (and only later corrected himself) when he asserted that the same assessment had determined that Russian interference had not affected the result of the presidential election.  In fact, the participating agencies explicitly stated that they were not attempting to judge the ultimate impact on the election, and that their refraining from doing so is consistent with their mission of staying focused on foreign actors and not getting into analyzing U.S. politics or U.S. public opinion.

That remark by Pompeo in October came in an appearance before the Foundation for Defense of Democracies (FDD), the right-wing advocacy group that has become the nearest thing to mission control for efforts to kill the JCPOA.  On this and other occasions, Pompeo has pushed the notion that there is some kind of common cause between Iran and Al Qaeda—a manufactured notion eerily reminiscent of a similar manufactured notion about terrorist connections that the Bush administration used to sell the Iraq War to the American public.  When evidence doesn’t match the line Pompeo is trying to sell, he does more manufacturing.  He ordered a re-exploitation of documents captured in the raid that killed Osama bin Laden, even though those documents already had been thoroughly exploited for intelligence purposes, to try to find anything suggesting a connection to Iran.  He then gave an advance, pre-release version of a new selection of documents to FDD, which duly published in its journal a highlighting of one anonymous memo that, if one squinted and spun hard enough, could be construed as reflecting such a connection—even though the overall direction of all the documents is that there was far more conflict than cooperation between Iran and members of Al-Qaeda, some of whom Iran had under a form of house arrest.

Pompeo’s conduct was improper in abandoning the principle of objective intelligence and trying to slant intelligence and the public portrayal of intelligence judgments for political purposes.  He also behaved improperly in giving priority access to documents not to mainstream news organizations but instead to an advocacy group with a specific policy axe to grind.