The Itch to Escalate the Syrian Civil War 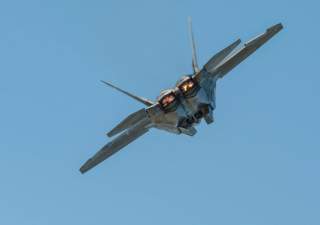 The complicated, multidimensional nature of the Syrian civil war continues to discourage clear thinking in debate about U.S. policy toward Syria. The involvement in the conflict of multiple protagonists who are each anathema to the American debaters but who are opposed to each other within Syria is a fundamental complication that too often gets ignored. Basic questions of what U.S. interests are in Syria too often get overlooked. A recent example is an op-ed by Dennis Ross and Andrew Tabler of the Washington Institute for Near East Policy that argues for a bombing campaign against the Assad regime and expresses opposition to any cooperation with Russia in striking violent extremist groups such as ISIS and the Al-Qaeda-affiliated al-Nusra Front.

In trying to square the circle of intervening forcefully in the war against the Assad regime without undermining efforts against anti-Western terrorist groups against which that regime is also fighting, Ross and Tabler contend that any U.S. or Russian action against those groups “would push terrorist groups and refugees into neighboring Turkey,” bringing terrorists, “and the threat of militant violence, closer to the West.” This is an inventive but odd reverse take on the old familiar “fight them over there or fight them at home” view of counterterrorism. That view was never valid in assuming a direct positive correlation between fighting overseas and homeland security, but neither is there the sort of direct negative correlation that Ross and Tabler are postulating. Experience has indicated that negative correlations have had more to do with resentment over U.S. military action fomenting additional radicalism and anti-Western sentiment, and Ross and Tabler are arguing for more such action in Syria. They make the same mistake as the “fight there or at home” outlook in assuming a fixed number of bad guys who move across international borders but never multiply. Moreover, as far as refugees are concerned, people can become refugees just as easily as a result of fighting against the Assad regime as they can from fighting against ISIS or Nusra. In the end, Ross and Tabler aren't squaring any circle at all; they are just saying they want to go after Assad, and the counterterrorism part of U.S. policy on Syria ought not to have priority.

In criticizing the Obama administration's approach of focusing on counterterrorism and in searching for common ground with the Russians in doing so, Ross and Tabler spin out scenarios as if they were consequences of what the administration is doing, even though they aren't. They make an argument about how the Assad government lacks the manpower to hold rural Sunni areas, and thus must rely on Hezbollah and other Shiite militias to do so, and this will force Nusra et al. to Turkey with that greater proximity to the West. But what does any of this have to do with what the Obama administration is doing or talking to the Russians about? Damascus and Hezbollah have their own reasons for doing whatever they are doing in Sunni areas of Syria.

Ross and Tabler attribute certain priorities to Russian president Vladimir Putin, asserting that Putin “is more interested in demonstrating that Russia and its friends are winning in Syria and the United States is losing” than in finding ways to limit Russia's costs and involvement in the Syrian civil war. But their subsequent appeal to use U.S. air power to inflict costs on Russia or its Syrian ally seems to assume the opposite. If Putin really were more interested in playing winners and losers in Syria rather than limiting his country's costs there, then cost-imposing escalation by the United States would be more likely to engender Russian counter-escalation than Russian retrenchment.

Perhaps it is to try to slip out of such illogic that Ross and Tabler say that the U.S. air strikes they want “would be conducted only if the Assad government was found to be violating the very truce that Russia says it is committed to.” But the implicit assumption that there would be anything approaching a common view of what is or is not a truce violation and who did or did not commit it is highly unrealistic, especially in a conflict as messy as, and with as many different combatants as, the one in Syria. The Syrian regime would almost certainly describe any attacks by itself as a response to violations by the other side, and in at least some instances the regime might be right. Ross and Tabler write about persuading Russia “to make Mr. Assad behave”—as if Russia had that much control over Syria behavior, which it doesn't. Who is going to make the highly fractured and extremist-infested opposition “behave”?

The op-ed makes the erroneous assumption that creating the conditions for a political settlement is all a matter of imposing sufficient costs on the Syrian regime and getting its Russian and Iranian backers to shed their presumed belief (another erroneous assumption by Ross and Tabler, for which they provide no evidence) that a purely military outcome of the conflict is possible. But it takes more than one side to make a political settlement. There has been at least as much obduracy and unwillingness to compromise on the side of rebel elements. Weighing in on the side of those elements with U.S. air power would be likely only to increase that obduracy. Civil wars can get settled only when all sides, not just one side, see a continued war as a hurting stalemate. A cease-fire will be elusive if any side sees the war as going either too well or too poorly.

The biggest and most fundamental shortcoming in Ross and Tabler's piece is that it fails to address exactly where U.S. interests do and don't lie in Syria. Ill consequences emanating from Syria in the form of refugees, instability, or terrorism are consequences of the war itself, not of any particular political coloration of the government in Damascus. The Assads, father and then son, have been in power there for 46 years. It would be hard to make a case that whether an Assad regime lives or dies is critical to U.S. interests. It would be all the harder when taking into account the current alternatives, or lack of alternatives.

The Syrian war will eventually end with some kind of exhaustion-inspired compromise, and maybe even just a shaky and essentially temporary one such as the Taif accord regarding Lebanon or the Dayton agreement concerning Bosnia. There probably is realization of that already in all of the capitals concerned. Getting even to the point of a shaky agreement will not be a matter of simply pressuring or imposing costs on one side. And getting there will require the positive cooperation of Russia and Iran. Neither of those allies of Assad is going to be induced by U.S. air power to pin the label of “loser” on itself and slink away from Syria in embarrassment.