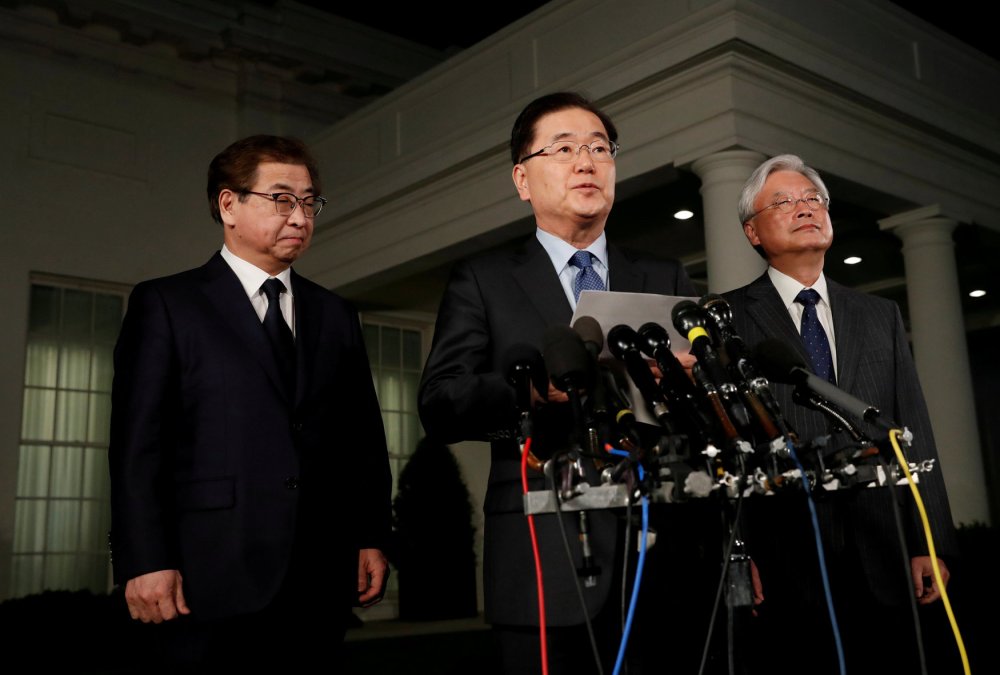 In July 1951, armistice talks began that eventually, after two years of difficult negotiations, would halt the Korean War.  The locale was the city of Kaesong, which was just south of the 38th parallel but on the North Korean/Chinese side of the front line.  The lead negotiator for United Nations forces was U.S. Navy Vice Admiral C. Turner Joy.  (After his death, the Navy honored Joy by naming a destroyer after him—a warship that in 1964 would be involved in the Gulf of Tonkin incident, a key event in the U.S. entry into the Vietnam War.)  Joy quickly observed how thoroughly the North Koreans wrung every advantage they could from the talks.  They had sawed down the legs of Turner’s chair so that he would be lower than the North Korean general who was his counterpart on the other side of the table.  The North Korean one-upmanship continued.  When, for example, the United Nations side placed a small version of its flag on the negotiating table, after the next recess a conspicuously larger North Korean flag appeared.

If talks this year between the United States and North Korea became mainly a contest in symbolism—a manipulation of the optics of face-to-face confrontation at the presidential level—then the advantage lies with the North Koreans.  They have been playing that game a long time and are good at it.  If Donald Trump believes he can come out on top in the face-to-face game because of his self-described deal-making prowess or because he is a bigger kid on the block than Little Rocket Man or because of some other metric defined at the interpersonal level, then he is almost certainly mistaken.

The prospective talks, if they ever take place, are nonetheless on balance welcome.  They are better than most of the imaginable alternative ways in which U.S.-North Korean relations might develop over the next several months.  As Winston Churchill put it, “meeting jaw to jaw is better than war”.

Trump’s decision has thrown for a loop those, mostly on the right side of the American political spectrum, who customarily and mistakenly regard talks with adversaries as a “reward” being bestowed on the adversary rather than the United States pursuing its own interests with the tool of diplomacy.  An irony is that a prospective Kim-Trump meeting comes closer to constituting a real “reward” for the adversary than is true of most other instances in which that notion has been voiced.  Current rhetoric in defense of Trump’s decision about how greater “pressure” on North Korea brought Pyongyang around is laughable, given that the North Koreans have wanted such a meeting for years.  The closest they previously came was late in Bill Clinton’s administration, when they got a visit from Secretary of State Madeleine Albright but never snagged Clinton himself.  Now Kim will be able to present himself as on a par with the most powerful leader on the planet.

Related to customary rhetoric about not rewarding adversaries has been rhetoric about not engaging other states without the United States getting something in return.  We heard much of that kind of rhetoric, for example, when Barack Obama restored diplomatic relations with Cuba.  (What the United States actually got from the decision on Cuba was a move away from a half-century of failed policy that meant only embarrassment and isolation for the United States, and a move toward opening economic opportunities for U.S. business).  In recent weeks Trump has bestowed two big rewards on foreign governments with little or nothing in return.  The first was his move regarding Jerusalem, which was a gift to the right-wing government of Israel and for which that government did not have to do anything at all in return.  (The move also has meant more isolation of the United States, rather than less, as was the case with Obama’s recognition of Cuba.)  Now there is the promised meeting with Kim, who has only talked about pausing nuclear and missile tests (a pause that those programs, given their recent rapid pace, probably were ready for anyway) and has said that he “understands” U.S.-South Korean military exercises going ahead—exercises he would not be able to stop anyway.

The most worrisome aspect of what the prospective summit meeting might lead to is something else: Trump’s impulsive, personal, and erratic way of making decisions, which leaves little or no room for an orderly policy process to help the president arrive at the best decisions.  Foreign policy bureaucracies exist for good reasons that involve making as well as executing policy, and Trump repeatedly has shown his failure to understand or recognize those reasons.  His attitude is reflected not only in specific decisions in which he blows off advisers, such as the recent one on steel and aluminum tariffs, but also in his insouciance about large numbers of senior-level vacancies because, he says, he is the only one who matters.  In the same vein, and in the same week as the announcement about the North Korean meeting, presidential adviser and son-in-law Jared Kushner—he of the downgraded interim security clearance and absence of foreign policy or governmental experience—traveled to Mexico and met with the president and foreign minister while excluding the highly experienced U.S. ambassador from the meetings.

Trump got the Korean encounter off to a characteristically impulsive and seat-of-the-pants start by joining unannounced a lower-level meeting with the South Korean officials who had met with Kim, immediately making his decision about a summit meeting, and insisting that the decision be announced publicly right away.  No one else in the U.S. Government had had a chance to digest the South Koreans’ report, let alone to do anything remotely resembling policy planning or a careful consideration of options.  The White House’s later mixed signals about whether it was attaching preconditions to a summit meeting reflect the unplanned and chaotic way in which the original decision was made.

Trump’s impulsiveness and rejection of institutional support, along with his narcissism and other problematic qualities, make unfavorable outcomes of a meeting with Kim all too easy to envision.  Probably the worst possible outcome would be that a meeting that yields nothing the United States could describe as a deal or a win leads Trump to say that now he has tried a peaceful route to denuclearization and so there is no alternative to military force.  Jawing could hasten a resort to warring, rather than being an alternative to it.

Orderly policy processes, with full involvement of the relevant bureaucracies, are important not only to guide and rein in an otherwise unguided missile like Trump.  They are important to ensure that all relevant interests, hazards, and possibilities are assessed and considered, no matter what sort of person is in the White House.

Consider a past case that has some similarities to the prospective meeting with Kim but that involved a far different breed of decision-maker: Richard Nixon’s opening to China in the early 1970s.  That initiative also excluded the relevant bureaucracy, although the careful thinking of those making the initiative mitigated some of the downsides of the exclusion.  While in the political wilderness, Nixon had ruminated at length about great power politics and America’s relationship with the major communist states.  His preparation for his China trip included writing down on a yellow legal pad what the United States wanted from the relationship, what the Chinese wanted, and what they both wanted, and using that inventory to assess where there was and was not basis for agreement.  His partner in the China initiative, Henry Kissinger, was one of the most brilliant thinkers in the history of U.S. foreign policy.

Even with all that brilliance, avoidance of a normal policy process—including complete exclusion of the Department of State—had its costs.  When senior State Department officials finally got to look at what would become known as the Shanghai Communiqué, Assistant Secretary of State Marshall Green quickly spotted a problem, having to do with an enumeration of U.S. security relationships in East Asia that omitted any reference to Taiwan.  This formulation would have evoked comparisons with Secretary of State Dean Acheson’s infamous speech before the Korean War that appeared to exclude South Korea from a U.S. security perimeter in the region.  Correcting the problem at that late stage, after the Chinese side had approved the draft communiqué, was a significant bump near the end of Nixon’s historic visit.

If we need a demonstration of how severe can be the costs to the nation of avoiding a policy process, the outstanding example in recent times is the George W. Bush administration’s invasion of Iraq in 2003.  The decision to launch the war, notwithstanding the administration’s enormous efforts to sell that decision to the public, was preceded by no policy process at all.  There never was a policy options paper, or a discussion in the Situation Room, or any other bureaucratic forum that addressed the question of whether launching that war was a good idea.  There were well-grounded perspectives inside (as well as outside) the government that correctly anticipated the mess that would ensue after Saddam Hussein was overthrown, but the war-makers ignored them.  Had there been a policy process, these perspectives would have been part of that process.  And the reasonable conclusion to emerge from the process would have been that initiating such a war would be a big mistake.