The Never Ending Libya Nightmare: Civil War, Benghazi and Beyond 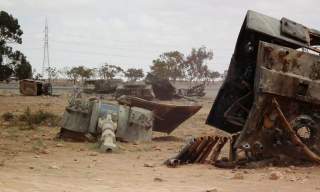 Just when one might have thought the mess in Libya could not have gotten worse, it has.  The latest round in the multidimensional chaos that has prevailed since the overthrow of Muammar Qaddafi was initiated by an ex-general named Khalifa Hiftar, who was trained in the Soviet Union, participated as a junior officer in the coup that brought Qaddafi to power in 1969, later broke with the Libyan dictator, and lived for years in the Northern Virginia suburbs of Washington, DC, where he apparently became a U.S. citizen.  Hiftar returned to Libya after Qaddafi was ousted.  Now he has put together a force he calls the “Libyan National Army” and aims at removing the interim parliament in Tripoli.

Saudi Arabia and several other Arab states have evacuated their diplomats from Libya, the United States is preparing for possible evacuation of U.S. personnel, and the country appears on the brink of a larger civil war.  In any such war it would be difficult to keep score, or to know whom to root for.  The mélange of militias that have provided what has passed for law and order in most of Libya are choosing sides in no particular pattern.  Those in Libya closest to being called secular liberals seem to be associated with military officers of the old regime.  The current chief of staff of the Libyan army—at least that's his title, not to be confused with whatever actual power he wields—has “ordered” Islamist militias to confront Hiftar's force in the capital.

Those who would like to blame the now-deceased Muammar Qaddafi for this muddle would have a basis for doing so, in that during the four decades of his personal rule whatever could have formed the institutional basis for a healthy civil society and pluralistic politics was destroyed or allowed to wither.  We also need to hold responsible, however, all those who blithely overlooked this fact, who refuse to believe that political culture and recent political history have anything to do with the prospects for building a stable political order, and who think that getting rid of a despised dictator is all that is needed to bring such an order into existence.  We do not know exactly what would have been the course of the revolt against Qaddafi had outside states not intervened.  We do know that several states, including the United States, did intervene forcefully, and for that reason they share some responsibility for the situation in Libya today.

We now have another problem in a Middle Eastern country for which, as with the civil war in Syria, there are no good solutions for outsiders to adopt.  If the violence in Libya worsens, there nonetheless will be the usual calls to do something—anything—about it.  Some such calls may focus on the common fear that Islamists will acquire and consolidate power.  Such fear would take inadequate account of the convoluted scorecard in which it is very difficult to determine who should be considered a friend and who a foe.  Some calls probably will make a humanitarian appeal to help those who suffer amid a civil war.  Such calls would likely overlook that the armed Western intervention against Qaddafi also had a humanitarian rationale—a distorted one, in that a warning by the former dictator to deal harshly with those who took up arms against his regime was falsely translated into a prediction of a genocidal bloodbath.

Policy debate always should focus on the the problems of today.  But with Libya there also is plenty of material for critical retroactive examination, going back to the Western intervention of 2011.  That is all the more reason why initiation of the umpteenth inquiry into a lethal incident in Benghazi in 2012 is a senseless digression.  There already were other reasons it made little sense.  There is no basis for believing that the umpteenth inquiry will find anything that the umpteen-minus-one inquiries already undertaken have not.  Amid the endless focus on supposedly competing (actually they aren't) explanations for an attack on a U.S. facility, no one has provided persuasive reasoning as to why any one explanation should have worked more to the political advantage or disadvantage of the administration than a different explanation.  The death of Americans is bad news no matter what the explanation.  And the whole continuing escapade is such a crass attempt to extract partisan advantage from human tragedy that one has to wonder whether backlash is beginning to outweigh any such advantage, even among gullible members of the American public.

Of course, we all know the political calculations involved.  A focus on one incident is an effort to discredit the current administration and a particular leading possible presidential candidate.  A focus on decisions about the whole Libyan situation that is the fundamental cause of the Benghazi incident would cast the net of responsibility much wider—to include liberal interventionists in the administration, neoconservatives outside it, and many others.

However tragic a single incident was to the people it touched, it is one piece of bad news in a cascade of such news coming out of Libya.  The intervention already has negatively affected U.S. interests, particularly in providing a disincentive to other regimes to do what Qaddafi did in negotiating an end to involvement in terrorism and an end to production of unconventional weapons.  The disorder in Libya threatens to affect U.S. interests negatively in other ways.  The obsession over the Benghazi incident has a rearranging-chairs-on-the-Titanic quality while the entire Libyan ship has been sinking.