The Party of No, and now an Administration of No 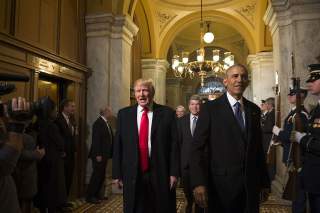 The abortive attempt to pass Paul Ryan’s bill for tax cuts and partial dismantling of the health care system vividly demonstrated the consequences of trying to govern according to what one is against, rather than what one is for.  If this overwhelmingly negative approach had not been the Republicans’ approach (and Donald Trump’s), the story of the Affordable Care Act, and the politics surrounding it, would have been far different.  That is certainly true given how the ACA is centered on a system of commercial insurance that was earlier associated at the state level with Mitt Romney.  But with Congressional Republicans deciding from the beginning of Barack Obama’s presidency to oppose him at almost every turn and to deny him significant achievements (and, per Mitch McConnell, to make denying him a second term their top priority), and with the ACA being seen as Obama’s premiere domestic legislative accomplishment, total and automatic opposition to the ACA was the course taken.  Trashing Obamacare become a mantra divorced from what the law was or was not doing, and divorced from any careful consideration of Americans’ health care needs.

If the Republicans were to develop an alternative, they had seven years to do it.  Instead, House Republicans spent that time, as part of the recitation of the mantra, passing dozens of repeal resolutions.  When the dog finally caught the car—when the GOP won control of both the legislative and executive branches—the realities that the ACA was designed to deal with were still there.  Realities such as that if people who need extensive medical care now are to be covered, people who do not happen to need a lot of care right now will have to help pay for it, through buying commercial policies, paying penalties or taxes, or whatever.  It was impossible both to assure affordable health care coverage for the great majority of Americans and to have a system that, however it might be dressed up, didn’t look a lot like Obamacare (impossible, that is, without going to a single-payer, Medicare-for-all system with which Democrats would be much more comfortable than Republicans).  Hence the disarray among House Republicans and their political meltdown last week.

President Trump has since been emphatic in trying to shift responsibility onto Democrats for anything unfavorable that happens henceforth with the health care system.  But of course it is his administration, not Obama’s or any other Democratic one, that is now responsible for administering the law.  His assertion of Democratic responsibility, coupled with his forecast that the ACA will “explode”, gives him a motivation to sabotage the workings of the ACA.  That sabotage has already begun, as it did earlier at the state level where Republican-controlled state governments refused federal funds to provide help under Medicaid to their citizens needing such assistance.  The years-long drumbeat about getting rid of the ACA has probably been the biggest source of hesitation to insurers about participating in the insurance exchanges created under the act.  Since entering office, the Trump administration has been curtailing advertising encouraging people to sign up for insurance and moving away from enforcement of ACA-related requirements such as the individual mandate.  We are seeing here an example of the most perverse possible consequence when a party of No becomes a government of No: the intentional undermining of a public program to make it work poorly rather than well.

The handling of the ACA is perhaps an extreme example because it became an extreme Republican obsession.  But some of the same dynamics may be seen elsewhere, including foreign policy.  For example, the Joint Comprehensive Plan of Action, otherwise known as the Iran nuclear agreement, occupied a place in Barack Obama’s foreign policy comparable in significance to the ACA in domestic policy.  So again, it elicited reflexive Republican opposition.  It does not appear that Trump will pull directly out of the JCPOA; doing so would obviously negate any assertions that the agreement would “explode” on this own.  The preferred methods of sabotage include imposition of enough additional sanctions on Iran that the Iranians would proclaim the agreement was voided by the United States reneging on its obligations.  And like the ACA, the JCPOA requires ongoing attention and implementation.  For the United States to remain in compliance, the administration will have to renew some waivers to existing sanctions legislation.  Thus Trump could in effect sabotage the agreement by doing nothing.

The JCPOA example illustrates another attribute of a government of No, which is a failure to consider what the alternatives are to whatever is the policy being opposed, and to consider the relative merits of each alternative.  Opposition to the JCPOA has all along failed to face the fact that the alternative to the agreement, which is no agreement, would mean an end to the special limitations on Iran’s nuclear program and an end to the enhanced international inspections of that program.

In many other areas of foreign policy, in which circumstances and problems are imposed on policymakers at least as much as they tend to be with domestic policies, it is difficult to come up with approaches that look new and different, as well as being prudent and effective.  There are only so many things the United States can do with good effect, and chances are that the relevant options have already been thoroughly considered.  Thus, key attributes of many policies look very similar from one administration to another.  This has been the case so far with some of the major foreign policy challenges facing the Trump administration, such as the fight against ISIS.  Although candidate Trump had berated Obama for not taking more effective action against the group, when Trump’s secretary of state presented to a gathering last week the administration’s plans for dealing with ISIS, those plans, in the words of the New York Times report on the meeting, “closely parroted Mr. Obama’s strategy.”  Consistent with that resemblance, so far the Trump administration has followed the general lines of Obama's policies regarding military activity in Syria.  Similarly with the problem of North Korea and its nuclear weapons: even though Secretary Tillerson spoke earlier this month about a “new approach” toward North Korea, as Jeffrey Lewis observes, the supposedly new approach is “in fact, the old approach”, with even many of the same exact words that the Obama administration had used.

For any administration that thinks more in terms of what it wants rather than what it opposes, such similarities are not necessarily a problem.  The continuities are accepted, while asserting responsible stewardship of the nation’s interests and openness to adjustments and improvements in existing polices where appropriate.  But for an administration of No, the similarities are a problem.  With its coming to power based overwhelmingly on rejection of what came before, how can it defend continuation of what it rejected?

A resulting hazard is temptation on the part of such an administration to go out of its way to pursue policies that look new and different even though they are not prudent or effective.  Such a hazard may be materializing with moves to become more deeply immersed in the Yemeni civil war on the side favored by the Saudis and Emiratis, whose intervention in the conflict has multiplied the human suffering without bringing the war any closer to a conclusion.  Other motivations probably are also at play, including an itch to be assertive anywhere there is a possible Iran angle (an itch exhibited by Secretary of Defense James Mattis, whose department has forwarded a proposal for escalation of the U.S. involvement in Yemen).  But an escalation that can be portrayed, as this one is, as a removing of “Obama-era restrictions” will be attractive to the Trump White House because it can be described as contrary to something Obama did.  Trump’s setback on health care and his sliding poll numbers will tend to make the temptation all the greater.

Damage that results from succumbing to this sort of temptation is likely to continue until and unless this administration can decide, more than it has so far, what it stands for—in the sense of workable policies, not just slogans or promises—and not just what it is against.