Trump and The Art of the No Deal 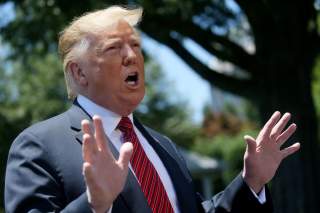 Seemingly endless threats, insults, punishment, and attempts at coercion have been a leading feature of Donald Trump’s foreign policy. The pervasive bullying so far has not been matched by a comparable degree of positive results, as many have noticed. North Korea’s nuclear arsenal is no smaller than it was when Trump took office, it’s larger. The trade war with China is escalating rather than being resolved. Policy toward Iran is a multifaceted failure: Tehran hasn’t budged toward negotiation of any “better deal,” any claim that Iran’s behavior has improved is contradicted by the Trump administration’s other claims of new military threats from Iran, and now Iran is about to exceed nuclear limits that it had been scrupulously observing under a multilateral agreement that Trump has endeavored to destroy.

What has passed for success, mostly involving trade in North America, has followed the Trumpian model of starting a fire to claim credit for extinguishing it, and of claiming as a major breakthrough something that is barely different from a previous arrangement that Trump denounced as awful. Trump’s trade agreement with Canada and Mexico represents minor tweaks to the previous North American Free Trade Agreement (NAFTA), which Trump had assailed as “one of the worst trade deals ever made.”

Trump’s more recent threats of imposing tariffs on Mexico to get action on the unrelated matter of Central American migration have resulted in an understanding that involves measures Mexico was mostly taking already before the threats, including the promised deployment of a recently established paramilitary force that still mostly exists only on paper. The exact terms of the understanding remain unclear, as Mexico denies Trump’s claims of a “secret” agreement. But the major back down appears to have been on the U.S. side, including dropping insistence on moving directly to a “safe third country” treaty that would require Central American migrants to seek asylum in Mexico.

Assessments of success or failure need to specify, of course, the policymaker’s objective and the standard for measuring success. Trump’s technique of manufacturing a crisis in order to be seen resolving it may, in his view, be successful in serving his dominant objective of appealing to his domestic political base. Other comparably parochial political objectives may be served by unending hostility and tension with some of the foreign adversaries that are the targets of the bullying. A bête noire can serve a purpose as a foil and rallying cry. For the Trump administration, this may be true of permanent hostility toward Iran, as it is even more clearly true for Trump’s political partner Benjamin Netanyahu. But neither of these sorts of political objectives should be confused with U.S. national interests, which provide the proper standard for measuring success.

Each of the administration’s failures to date can be explained in large part in terms of the details of the specific country and relationship involved. But some general shortcomings of the bullying approach to foreign relations, including the following five, are common to all the cases.

People don’t like to be bullied. Resistance is the default response, and a very human response, to attempted coercion. The resistance appears on two levels, one of which is emotional and involves the simple and universal dislike of being bullied. The other level is the more calculated one of avoiding a reputation of giving in to bullies. The understandable fear is that concessions made under coercion will just encourage more demands and more coercion.

The target of bullying has strong policy and political reasons not to change. If a country already has been doing something despite U.S. displeasure, it must have compelling reasons to do it. Those reasons tend to get downplayed or overlooked on the U.S. side amid rhetoric that portrays the behavior in question as unreasonable. What the targeted country views as reasonable, and sometimes even vital, affects its decisions more than what other governments think. The North Korean nuclear arsenal that the rest of the world sees as a threat to peace Kim Jong-un sees as an important ingredient in his regime’s survival. What other countries may legitimately view as unfair Chinese trade practices Beijing sees as ingredients in China’s rapid economic growth. Iranian regional activity that is described in the United States as “nefarious” serves, in Iranian eyes, purposes important to Iranian security. Such situations may be amenable to negotiation and compromise that takes account of each side’s interests and concerns. They are not amenable to the bullying formula of one side coercing and demanding and the other side folding.

The bully fails to provide positive alternatives. There may be something inherent to the bullying mode that tends to make it all stick and no carrot. In any event, the Trump administration has at times seemed to fall into an all-stick mode, most obviously in its policy toward Iran. Claims that the “maximum pressure” campaign has provided “leverage” are false; there is no leverage when the other side has been given reason to believe that it will be punished no matter what it does. And the more that Trump describes tariffs as good in their own right and economically beneficial to the United States, the less incentive there will be for trading partners to respond to tariffs as a temporarily imposed instrument of coercion that they can count on going away if they comply with U.S. demands.

Incessant bullying loses credibility over time. The loss of credibility is twofold. Repeatedly sacrificing accommodation and positive accomplishment for the sake of more bullying leads the other side to conclude that the bully will not live up to agreements. This again kills the incentive to reach new agreements. Trump has exhibited this problem not only with agreements reached before he entered office (as with the Iran nuclear accord), but even ones reached during his administration—most notably, his own North American trade agreement, which he evidently was willing to undermine for the sake of using tariffs to try to coerce Mexico on the migration issue. There also is a loss of credibility regarding the bully’s perceived determination to carry through on his threats. With many threats being made, some of the target countries will not fold, and some threats will not be carried out. Other countries notice this and will be less scared the next time the same bully threatens them.

Even bullies need agreements. The model of one side demanding and the other side complying does not square with the many situations in international relations in which a lack of agreement means both sides lose. This is true even for the world’s superpower. And it affects politics inside the superpower, as illustrated by Republican opposition to Trump’s threatened tariffs against Mexico and how that opposition was instrumental in getting Trump to back down from some of his demands. This is one of the respects in which Trump’s career as a ruthless wheeler-dealer in real estate was poor preparation for foreign policy. Foreign policy problems cannot be cast aside in search of a better deal elsewhere. The economies of major trading partners such as China or Mexico are not like a business counterparty who can be browbeaten or stiffed, with the bully knowing there always is some other golf course or hotel that he can build somewhere else with someone else.