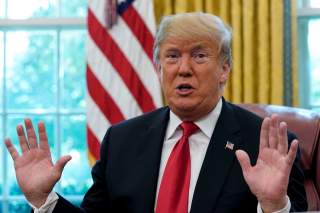 The disappearance and probable death of Jamal Khashoggi at the hands of the Saudi regime is forcing itself onto Donald Trump’s decision plate in ways that not much else has during the presidency of Trump, who is a master in the art of deflecting national attention. As he contemplates his choices, his urges are pushing him in a direction contrary to what would be the most appropriate U.S. policy response.

If one steps outside the Trump administration’s way of depicting the Middle East and looks beyond the sword-dancing and orb-gazing of Trump’s unforgiving relationship with the flattery-bestowing Saudis, then the Khashoggi matter, though certainly outrageous, can be seen as part of a larger pattern of the rule of Saudi Crown Prince Mohammed bin Salman (MbS). That pattern has included numerous excesses both foreign and domestic. MbS’s message of domestic reform is badly marred by his harsh intolerance of any dissent or potential challenges to his power. The regime’s pattern of breaking the standards of legitimate international behavior has included kidnapping the prime minister of Lebanon and, above all, an indiscriminate air war in Yemen that is more responsible than anything else for turning that country into a humanitarian disaster. The Trump administration’s determination to overlook this pattern was recently highlighted by its profoundly dishonest certification that Saudi Arabia is taking care in its Yemeni war to minimize harm to civilians.

Although Jamal Khashoggi is only one man versus the thousands who have perished or suffered from bombardment in Yemen, several aspects of his case have generated a burst of public attention and concern. He is a U.S. resident who is well known to cognoscenti of Saudi-related issues. He is a journalist who got into bad graces with the Saudi regime because of what he has written in the free Western press. This is why the fourth estate has paid attention to his case. He was, after all, a regular contributor of opinion pieces to the Washington Post. Understandably and appropriately, the Washington Post has devoted extensive coverage to the story since Khashoggi’s disappearance. The head of the newspaper’s editorial page, Fred Hiatt, has been eloquent in explaining that no other policy objectives can justify overlooking what a murderous regime has done.

An additional attention-getter has been the grisly aspects of the case, seemingly out of thriller fiction. Reportedly one of the members of a squad of Saudi operatives who descended on Istanbul—the location of the Saudi consulate where Khashoggi disappeared—on the day of the disappearance is an expert on quickly cutting up dead bodies, raising the possibility of murder followed by dismemberment of the corpse to hide the evidence.

Trump clearly has been reluctant to respond at all to the episode. He initially tried to justify his inaction by repeatedly remarking that Khashoggi is not a U.S. citizen and that the incident happened in Turkey, not the United States. But Khashoggi is a legal U.S. resident and has children who are U.S. citizens. Now there is a rapidly growing bipartisan uproar over the case. Even Trump’s principal factotum in the U.S. Senate, Lindsey Graham (R-SC), has said there would be “hell to pay” if the Saudi government is proven to have killed Khashoggi. The uproar has changed Trump’s posture. In an interview to air on 60 Minutes this weekend, the president promised “severe punishment” if the United States determines that Saudi Arabia killed Khashoggi.

An appropriate adjustment to U.S.-Saudi relations—one consistent with U.S. interests, broadly and properly conceived—should have been made well before the Khashoggi affair even arose. Such an adjustment would end the unqualified deference that the Trump administration has given to Riyadh and make the relationship more businesslike, to be managed up or down to the extent to which Riyadh does or does not act consistent with U.S. interests. Changes in the oil market mean that petroleum is no longer the overriding concern it once was on anything having to do with Saudi Arabia. Certainly commonality of values is not a basis for anything more than a businesslike relationship; the United States has no more shared values (such as democracy, freedom of religion, and freedom of speech) with Saudi Arabia than it does with any other state in the Middle East.

MbS’s war in Yemen has long been reason enough not only to end the direct U.S. support to that campaign but also to curtail U.S. arms sales to Saudi Arabia. Trump’s argument that any such curtailment would entail a U.S. economic sacrifice and would only open a market for Russia and China to exploit is phony because his claim of securing $110 billion in military sales to Saudi Arabia is also phony. The supposed sales, rather than deals signed under the current administration, are mostly just statements of intent that already had been announced while Barack Obama was president. Although few U.S. jobs are thus at stake, the military sales relationship does provide the United States with leverage, if it chose to use it, given Saudi Arabia’s longstanding use of U.S. equipment and the difficulties in switching to incompatible ordnance from a different supplier.

Exercising such leverage now, following Khashoggi’s disappearance, would send the useful message that autocracies will pay a price for misbehavior. Doing so would help to counteract the harmful messages Trump has sent, intentionally or not, to such regimes that they are free to exercise their power with impunity, as well as the more explicit message he has sent that the press is to be treated as an “enemy of the people.”

U.S. relations with Turkey play into U.S. deliberations about Khashoggi’s disappearance. The release from detention of American pastor Andrew Brunson—even though other American citizens, who have not benefited from the image of a Christian clergyman jailed by a Muslim country, are still incarcerated in Turkey—can set the stage for the United States accepting the Turkish rather than the Saudi version of events pertaining to Khashoggi. And it is the government of Turkey, the host country, that appears to have the best information outside of Saudi Arabia itself about what happened in that consulate in Istanbul.

Despite all this, Donald Trump’s urges probably lean him in the direction of continuing to cut the Saudi regime slack. As always with Trump, his finances and business dealings form a major part of his motivations, and the Saudis have been a large part of those dealings. As just one example, last year the Saudis reportedly spent $270,000 at Trump’s hotel in downtown Washington for travel associated with Saudi lobbying—part of the emoluments Trump receives from that facility a few blocks down Pennsylvania Avenue from the White House. In addition is Trump’s overall admiration for the autocratic Saudi regime, which was in full display during his trip to Riyadh early in his administration. A more specific factor is the role in the administration of son-in-law and advisor Jared Kushner and Kushner’s bromance with MbS.

Any significant departure from Trump’s current policies toward Saudi Arabia would inconveniently upset the picture of the Middle East, with its rigid roster of good guys and bad guys, that the administration has tried so hard to promote. Kushner’s much-advertised Arab-Israeli “peace plan” is wrapped up in this, given the hoped-for role of the Saudis in pressuring the Palestinians to accept whatever less-than-a-state status the plan leaves for them. An even bigger factor—as reflected in the rhetoric of John Bolton, Mike Pompeo and Trump—is the obsession with confronting and damaging Iran. Saudi Arabia figures into that obsession, according to the idea that any rival of one’s declared enemy must be one’s friend. Active interests in Washington seem so determined to ramp up hostility toward Iran that even a murder in a consulate is insufficient to divert them from that course. The administration has given every indication that its priorities are similar.

The uproar over Khashoggi’s fate necessitates Trump doing something in response, but he probably will try to do the minimum required to quiet the uproar. One response that might be attractive to the White House is suggested by moves in Congress to invoke the Magnitsky Act, which provides for sanctions against individuals, including foreign government officials, who have committed human-rights violations. The Turks already have laid the informational groundwork for such a move by providing the names and bios of the fifteen Saudi officials who flew in and out of Istanbul on the day in question. The Trump administration no doubt would try to limit any Magnitsky Act invocation to those officials and not much more, while withholding blame from the highest Saudi decisionmakers. Such an approach would be dishonest. It is highly unlikely such an operation would take place without the approval of MbS himself.