Trump Must Embrace Diplomacy With Iran 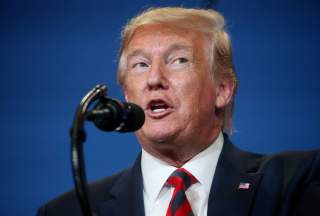 The Abqaiq oil-processing facility in Saudi Arabia has always been regarded as a vulnerable choke point in the world of petroleum trade. Essential for separating harmful gas and stabilizing crude oil to make it safe to transport on ocean-going tankers, the facility can process some seven million barrels of crude per day, which represents around eight percent of total global oil production. Thus, it is no surprise that the recent attack on Abqaiq, which temporarily took about half of Saudi Arabia’s oil output off the market, resulted in a sharp upward spike in oil prices.

The Houthi movement in Yemen, which has become the de facto government in most of the northern and western parts of that country, claimed responsibility for the attack, which would mark the Houthis’ latest attempt to retaliate for the devastation that the Saudi air war has inflicted on Yemen. The Saudi assault, which has turned Yemen into the world’s foremost humanitarian disaster, has provided an endless succession of headlines about mass civilian casualties. One day it is the bombing of a hospital, another day it an attack on a wedding, and on other days the Saudi bombs have killed children fleeing the scene of an earlier attack or many innocent civilians of all ages in the streets of the capital city of Sanaa. The most recent mass casualty attack has been a Saudi strike on a prison, with at least 130 confirmed dead.

Although the Houthis’ capabilities to inflict damage at a distance have improved over time, the retaliatory attempts have been pinpricks compared to the enormous human suffering inflicted in the other direction. (There are no reports yet of casualties, if any, from the attack on Abqaiq.)

Given the course of the war in Yemen and its spillover effects, the United Arab Emirates did the right thing recently in deciding to extract itself from further involvement in the war. Congress did the right thing in passing a bipartisan resolution that would have extracted the United States from further involvement in the Saudi air war. President Donald Trump did the wrong thing in vetoing that resolution.

Within hours of the attack on Abqaiq, Secretary of State Mike Pompeo reacted the way he always reacts to any bit of trouble in the Middle East, which is to place complete, unequivocal blame on Iran. “There is no evidence the attacks came from Yemen,” he declared—an interesting statement in that it evidently counted neither the Houthis’ rapid claim of responsibility nor their ongoing efforts to retaliate against the Saudis as “evidence,” especially in light of Pompeo providing no evidence for his assertion about Iran.

The secretary of state’s rapid, preemptive declaration brings to mind earlier declarations by U.S. policymakers about an adversary’s activities, which became preludes to U.S. wars. During the Lyndon Johnson administration there was the quick declaration that North Vietnam had attacked U.S. warships in the open waters of the Gulf of Tonkin in August 1964. During the George W. Bush administration there was Vice President Richard Cheney’s declaration, in a speech in August 2002 that was the opening shot in the campaign to sell an offensive war against Iraq, that “there is no doubt that Saddam Hussein now has weapons of mass destruction”.

Each of those declarations was followed by great pressure and priority placed on government analysts to scarf up any evidence that could be found to support what the political stratum had already declared to be so. Given the proclivities and practices of the current administration, there is no doubt that something similar is happening inside the executive branch today.

If the administration wanted to make a legitimate argument that Iran may have perpetrated the attack on Abqaiq, then it would not need to rely on questionable interpretations of overhead imagery or whatever other material it is going to make public. It could—but won’t—point to Iran’s motives and intentions in the face of the incentives that the United States has created.

Iran does not have, as Pompeo might like us to believe, some self-generated urge, wired into its DNA, to attack other countries’ oil industries. The only earlier time when the Gulf Arab states’ oil infrastructure became a target for Iran was during the highly destructive Iran-Iraq War in the 1980s. Iraq started the war, Iraq attacked Iran’s oil facilities, and the Gulf Arab states supported Iraq’s war effort. So naturally Iran tried to strike back, and the result was the “tanker war” in the Persian Gulf. At all other times before the last two years, Iran has had strong reason not to play violent games with anyone’s oil infrastructure, lest such a development result in violent backlash that hurts its own oil industry, which has been so important to Iran’s economy.

All that changed last year when the Trump administration totally reneged on U.S. obligations under the Joint Comprehensive Plan of Action, the agreement that restricted Iran’s nuclear program—despite Iran living up to its own stringent obligations under the agreement—and began a “maximum pressure” campaign that has become unrestricted economic warfare against Iran. Iran’s demonstrated its commitment to the agreement by sticking to its obligations for another year despite U.S. noncompliance. But earlier this year Iran’s patience ran out, especially when Trump ended the last of the waivers for countries that were still importing Iranian oil and declared its goal of reducing Iranian oil sales to zero.

Pompeo asserted in his tweet that “Iran has now launched an unprecedented attack on the world’s energy supply.” No, it would not be unprecedented. For the last year and a half, the United States has been attacking, through economic and political pressure, the part of the world’s energy supply that comes from Iran. Exactly what that means in terms of numbers is uncertain, but for comparison, Iranian oil production reached five million barrels per day during the reign of the shah and was not far below four million barrels per day during most of the nineties and the first decade of the twenty-first century. The U.S. policy aims to keep that oil off the market indefinitely. Initial estimates of the impact of the Abqaiq attack are an interruption of about five million barrels per day, which, depending on the pace of repairs, might be partially restored within days and completely restored within a few weeks.

Iranian leaders have been explicit in warning that if Iran could not export its oil, then other Persian Gulf producers would not be able to either. Was anyone in the Trump administration listening?

To borrow another formulation from Pompeo’s tweet, there is no evidence that in the absence of the administration’s economic warfare against Iran, Iran would do anything like attack the Abqaiq facility or have any incentive to conduct such an attack. If Iran did do the attack, then it was a direct and unsurprising result of the administration’s policy of unrelenting hostility and of inflicting economic pain with no apparent end.

Stoking conflicts, through either economic warfare or facilitating aerial bombardment, may seem like a viable policy if one ignores the other side striking back. But neither the Houthis nor the Iranians were ever going to roll over and play dead. Add additional damage to oil infrastructure and energy supplies to all the other damage that the administration’s failed maximum pressure campaign, and its support for Saudi misadventure, have caused. The only way out of the mess is to back off the campaign enough to make diplomacy possible, a path in which Trump, to his credit, has shown interest. It still is the only way out, notwithstanding the setback to that possibility the incident at Abqaiq represents.