Trump Is No Realist 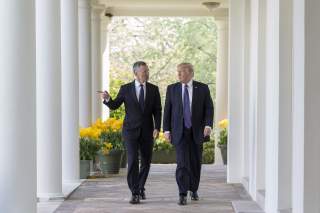 In his speech in Riyadh, President Trump said his administration was adopting “Principled Realism”—capitalized in the official White House version of the speech, as if to make a statement that there is a distinct doctrine being followed, one worthy of the term realism.  Some commentaries seem to have taken him at his word, with the main reference point being a contrast with the two previous U.S. administrations, which, in very different ways, placed greater importance than Trump does on the extent to which liberal democratic values prevail abroad.  The contrast is based more broadly on Trump’s overall lack of concern for human rights overseas.

But slapping away any interest in democracy and human rights does not define realism.  And we certainly have enough experience now with Trump to realize that his declaring he is doing something may have little relationship to what he actually is doing.

One basis for realism is derivable from the etymology of the term itself.  Realists regard the world realistically, as it really exists rather than as we might like to remake it or as we would like others to believe it looks like.  In this respect, realism is the antipodes of Trump’s world, which is filled with falsehoods and where what Trump would like others to believe is more influential than external reality.  This is most obviously the case with domestic affairs but also affects foreign relations, where in Trump’s world China is depressing its currency even though it really is doing the opposite, and something awful happened in Sweden last night even though Swedes really slept soundly.

In addition to a basic respect for truth and reality, realism as an approach to foreign policy is centered on the concept of all states constantly competing for influence and pursuing interests that partly conflict with, and partly parallel, one’s own interests.  Realists strive to harness the interests of others to advance their own nation’s interests.  Realists utilize alliances while playing this game of nations but avoid being side-tracked by any fixed images of good versus bad or virtue versus evil, or by traditional habits of affinity or repulsion.  Trump may seem to be practicing this facet of realism when he denigrates America’s most traditional circle of friendship and affinity, the North Atlantic alliance of Western liberal democracies.  We saw this pattern at Trump’s recent meetings in Europe, with his refusal to reiterate the Article Five commitment of the North Atlantic Treaty, his physically shoving aside the prime minister of the newest NATO member, and his statement in a multilateral meeting that “the Germans are bad, very bad.”

But far from practicing the realist discipline of eschewing good-versus-evil side-taking and being willing to do business with anyone in order to uphold and advance one’s own nation’s interests, Trump already has sunk deeply into such side-taking, as he did at earlier stops on his trip.  In Riyadh his visit was all about going all in with the Saudis, declaring that he was doing so as a matter of good confronting evil, and totally taking the Sunni side against Shia and the Arab side against Persians while ruling out doing any business with the other side.  In Israel, where he made no mention of a Palestinian state or the effects of Israeli colonization of occupied territory, there was barely a hint of dispassionately following U.S. interests rather than succumbing to the passions of his hosts.

Realists see foreign relations as a continuous effort to utilize the self-interest of other states in advancing the interests of one’s own state.  Transactions and understandings thus are mutually beneficial, and necessarily so.  Trump’s mindset, evidently developed during his predatory real estate career, of thinking in terms of discrete deals with “winners” and “losers” is antithetical to this realist concept.

As for the issues of democracy and human rights, realism is indeed different from neoconservatism and liberal internationalism in not taking the degree to which democratic and human rights values prevail as a scorecard for measuring the success or failure of one’s foreign policy.  Neither do realists believe that with enough effort and cleverness the United States can make those values prevail to a much greater extent than they do now.  But dissing, in the manner of Trump, concerns for human rights is not part of what defines realism.  Issues of democracy and human rights exist, they are part of the real world, and realists understand that they can affect the state-to-state relations that are the main currency of realist thought.

A realist would not overlook how giving a green light to Sunni monarchs to crack down  on Shia dissidents would encourage them to do exactly that, as in Bahrain, with implications for the stability and future of the U.S. military presence there.  A realist would not overlook how the continued absence of democracy and self-determination for Palestinians has major consequences for state-to-state relations in the Middle East, however much some customary friends wish that were not so.  A realist would understand how Recep Tayyip Erdoğan’s lurch toward authoritarianism diminishes what otherwise could have been a more positive role for Turkey in the international relations of the Middle East, and a realist would have seen no reason to congratulate Erdoğan on the referendum result that has facilitated the lurch.

It is not clear yet whether Donald Trump’s foreign policy has enough coherence to merit the label of any “ism”, with or without capital letters.  But it certainly isn’t realism.

Image: President Donald Trump walks with NATO Secretary General Jens Stolenberg on April 12, 2017, along the Colonnade outside the Oval Office of the White House in Washington, DC.