An Unending U.S. War in Syria? 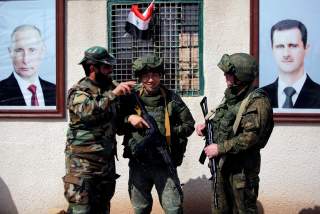 Amid a week of attention-grabbing drama about the dysfunction of Donald Trump’s presidency, it almost escaped notice that his administration is putting U.S. troops in harm’s way in a foreign war for a new purpose—a purpose that does not entail countering a threat to the United States. Newly appointed special envoy for Syria James Jeffrey stated that under a “new policy” on Syria, the United States is “no longer pulling out by the end of the year.” This policy goes against what Trump had been saying not only in the presidential campaign about wanting less U.S. involvement in Middle Eastern wars but also, more recently and more specifically, about wanting to withdraw the twenty-two thousand U.S. soldiers now in Syria.

Those troops have been in the northeastern part of the country, hitherto focused on aiding the fight against the so-called Islamic State or ISIS. But now, according to Jeffrey, besides mopping up the remnants of ISIS’s former mini-state in eastern Syria, U.S. troops are to stay in Syria indefinitely with the objective of ejecting from the country all troops of Syria’s ally Iran. Administration officials say that a motivation for the new policy is growing doubt that Russia will be either able or willing to assist in such an ejection.

The new policy is an entirely new war aim, not an extension or corollary of the prior declared purpose of combating ISIS. In fact, Iran’s presence in Syria, aimed at supporting the Assad regime, has been on the opposite side of the Syrian civil war from ISIS, which has aimed to overthrow that regime. Hawks in the administration have been talking for some time, of course, about confronting and opposing Iran any way and anywhere they can, but Jeffrey’s statement marks an official departure from what had been a U.S. war objective in Syria exclusively focused on ISIS.

That shift warrants much more scrutiny and debate than it is getting. American service members are being dispatched to a foreign war for the purpose of somehow getting one Middle Eastern state that has had a longstanding security relationship with another Middle Eastern state to remove its personnel from that second state. Exactly how are U.S. interests supposedly affected by whether those personnel stay or go? The only Americans who might be harmed under one scenario but not the other are the very soldiers who are being dispatched. The Syrian-Iranian alliance has existed for decades, going back to when the two states shared an adversary in the form of Saddam Hussein’s regime in Iraq.

The issue is not only whether U.S. interests are affected but whether they are affected so much as to justify participation of the U.S. military in a foreign war—which should entail a higher standard. Suppose that Article I, Section 8 of the U.S. Constitution were observed, as it ought to be but generally is not, and that a congressional declaration of war preceded involvement of the U.S. military in any foreign war. Suppose further that when an already deployed U.S. force is given an entirely different mission, that this mission and the deployment intended to serve it are given a thorough zero-based review—which it ought to be but generally is not. Would the elected representatives of the American people vote to send American soldiers into a war for the purpose of getting a Middle Eastern state to move some of its own troops from point A to point B (troops that had gone to point A not as invaders but instead to assist the incumbent government)? Probably not, despite years of rhetoric depicting Iran as evil incarnate.

To be fair, withdrawing an already deployed U.S. expeditionary force is not entirely the same as deploying one afresh, whether or not the mission has changed. When Richard Nixon and Henry Kissinger inherited the Vietnam War in 1969, their task was not centered on the question of whether the war had been a good or a bad idea in the first place but instead on how to extract a half-million-man army in a way that could plausibly be presented as “peace with honor.” But the scale of extraction and of the associated emotions and politics involving sunk costs are vastly different with the small U.S. force in Syria. Any legitimate issues about extraction there should focus on the previously established mission of mopping up ISIS.

The Syrian war always has been, and still is, a problem with no good solutions as far as U.S. policy is concerned. Robert Malley, who coordinated Middle Eastern policy in the Obama White House, describes Syria as a “failure” for the administration in which he worked. The agonizing over Syria is likely to accelerate in the coming days as the Syrian regime attempts to capture Idlib province, the last major remaining redoubt of rebel forces, and one to which many fighters ousted from other rebel enclaves had earlier repaired.

Ignoring uncomfortable truths about the Syria conflict keeps getting in the way of sober policymaking. The regime, aided by its Russian and Iranian allies, already has recaptured most rebel-held territory. Probably the shortest route to mitigating further suffering from this war—in which upwards of a half million people have died, and millions more have been displaced—is for government forces to complete the victory that they are well on the way to achieving. But the brutal and disagreeable nature of the Assad regime has made that prospect a nonstarter as a basis for (openly avowed) U.S. policymaking, even if the “Assad must go” slogan has quietly been retired.

Idlib presents more uncomfortable truths. Although Syria, Russia and Iran routinely, as propaganda, describe any Syrian rebels as “terrorists,” the label fits to a large degree in Idlib. The strongest armed group in Idlib, and the de facto ruler over most of the province, is Hei’at Tahrir al-Sham (HTS), which is the latest name of the Al Qaeda affiliate in Syria. A regime offensive in Idlib may indeed bring about the grievous casualties and displacements about which many commentators are currently warning. But a successful offensive also would end the inhumane local rule of HTS, which has featured mass arrests, secret prisons and torture.

Finding the least bad solution must involve multilateral diplomacy, given the number of external actors involved in the conflict. The most important players in that diplomacy have been Russia, Iran and Turkey, although the presidents of those three countries failed to achieve any breakthrough agreement on Syria in a summit meeting they just held in Tehran. All three have stronger interests in Syria than does the United States. For both Russia and Iran, Syria represents the single biggest, longest, and friendliest relationship either regime has enjoyed in the Arab world. For Turkey, Syria presents a host of immediate problems, including more than three million Syrian refugees already on its soil, the prospect of still more from fighting in Idlib, border security issues, and the Kurdish question.

The U.S. fixation on opposing and isolating Iran at every opportunity makes the difficult task of finding the least bad solution to the Syrian war even more difficult. The fixation was impeding Syria-related diplomacy even before the Trump administration took office. It was not until October 2015, three months after the multilateral agreement restricting Iran’s nuclear program was signed, that the Obama administration ended the longstanding U.S. objection to Iranian participation in Syrian peace talks sponsored by the United Nations.

Jeffrey and other Trump administration officials have not explained how keeping those U.S. troops in Syria will help achieve a withdrawal of Iranian personnel. Conceivably they could function as a bargaining chip, with a hope of achieving some agreement about withdrawal of all foreign forces from Syria. But two can play that same game. Iranian president Hassan Rouhani said at the summit meeting in Tehran not only that “fighting terrorism in Idlib is an unavoidable part of the mission of restoring peace and stability to Syria” but also that “we have to force the United States to leave” Syria. In that game, Iran, as noted above, has a stronger incentive to keep playing than does the United States.

The principal effect of keeping those American soldiers in Syria indefinitely, with opposing Iran as their new mission, is to increase the chance of a direct U.S.-Iranian military clash, possibly escalating into a major war. That’s not good, even though it might be what some in power want.

Image: Syrian and Russian soldiers are seen at a checkpoint near Wafideen camp in Damascus, Syria March 2, 2018. REUTERS/Omar Sanadiki/File Photo