Walter Jones Will Be Missed 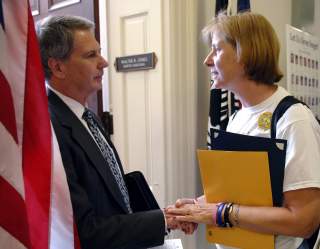 Rep. Walter Jones, a Republican representing North Carolina’s 3rd congressional district, died Sunday on his seventy-sixth birthday. His death will not get as much attention as the recent passing of former representative John Dingell, Jr., who was the longest-serving member of Congress in U.S. history and in honor of whom flags were at half-staff at government buildings last week. But Jones deserves recognition and tribute for reasons that all Americans, including ones who would have disagreed with him on many issues, ought to appreciate.

Jones initially supported the Iraq War, even gaining distinction for renaming French fries as “freedom fries” in Capitol Hill cafeterias after France refused to back the invasion. But he soon saw the costs of that ill-begotten military expedition as not justified by any legitimate rationale for the war. It was not only the costs themselves but the dishonest way in which the George W. Bush administration had sold the war to the public and to Congress that deeply disturbed Jones.

As Jones was working through in his own mind why the decisionmaking about the war had played out in such an ineffective way, he asked me into his office to talk it over. We discussed how objective consideration of facts and analysis had taken a back seat to any rhetorical device that would help to muster support for the war. During that conversation I learned from Jones that he was writing letters to the families of all U.S. service members who had died in Iraq (as well as in Afghanistan). All of them—not just ones from his own district. The letters would eventually number in the thousands.

I encountered Jones again when Senate Democrats convened a non-committee open hearing on events leading up to the war, in which I and a couple of other former officials were witnesses. The conveners invited any member of Congress to participate in the questioning. They got one taker—Jones, a lone Republican representative sitting at the dais alongside the Democratic senators.

Three distinctions stand out in my observations about Jones. One was his lack of any hesitation in recognizing his own mistake in backing an unjustified war. Instead of rationalization or doubling down, he devoted much effort to understanding the tragic mistake the entire nation had made and to seeing how such mistakes could be avoided in the future.

A second was his rejection of the partisan tribalism that pervades Congress and American politics. Jones paid a price for his independence within his own party caucus, but he had his priorities straight when it came to important issues of war and peace.

Third was his appreciation for the costs of war and his compassion for those who have paid the largest part of that cost. His understanding and his genuine distress were a refreshing contrast to detached discussions of military force that sometimes seem more appropriate for a video game than for national policy.

Congress would be a more effective and probably a more moral body if it had more members like Walter Jones.