Washington Has Become a Warmonger's Paradise 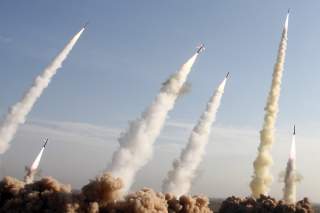 The current crisis atmosphere in U.S.-Iranian relations, in which the risk of open warfare appears greater than it has been in years, is solely, unequivocally due to the policies and actions of the Trump administration. To point this out does not mean that actions of the Iranian regime have not come to be part of the crisis atmosphere as well. It instead means that such an atmosphere would never have existed in the first place if the administration had not turned its obsession with Iran into the relentless campaign of stoking hostility and tension that has become one of the single most prominent threads of the administration’s foreign policy.

Without that campaign, and without the administration’s assault on the Joint Comprehensive Plan of Action (JCPOA)—the agreement that restricts Iran’s nuclear program—Iran would continue to comply with its obligations under the JCPOA and all possible paths to an Iranian nuclear weapon would remain closed. The channels of communication established during negotiation of the JCPOA would continue to be available to address other issues and to defuse any incidents that threatened to escalate into war (as was done during the previous U.S. administration). Whatever Iran has been doing for years in the Middle East, such as assisting Iraq in defeating the Islamic State and assisting its longtime ally in Syria, it would continue to do. In short, there would be no new threat and no crisis.

Some of the current discourse about Iran nonetheless makes it sound not only as if there is something new and threatening but that the Iranian regime is the initiator of the threat. At least seven reasons account for this misconception.

One is the demonization of Iran that is rooted in genuinely nefarious things the Iranian regime did in the past and dates back to when Ted Koppel was talking to Americans every weeknight about U.S. diplomats held hostage in Tehran. Over the years other factors have contributed to the demonization, including domestic American political pressures connected to certain regional rivals of Iran that want to keep it weak and isolated. The result is lasting and pervasive suspicion that colors American perceptions of everything involving Iran, regardless of the facts of whatever is the issue at hand.

Second, and related to the demonization, is sloppiness in the discourse that, as Ben Armbruster has analyzed, infects even the mainstream press. The tendencies include playing back the administration’s formulations without questioning them, and habitual use of such tropes as “Iran’s nuclear weapons program” when the internationally verified reality is that Iran ended its nuclear weapons program years ago.

Third is the gap in time between the Trump administration’s provocations and Iran’s responses. The administration renounced the JCPOA a year ago, when it began waging economic warfare not only against Iran but against anyone else doing normal business with Iran. If Tehran had announced back then that it was no longer bound by the agreement’s restrictions, then the connection between provocation and response, and the true source of whatever crisis ensued, would have been more obvious. But the Iranian regime—deeply committed to the JCPOA and hoping to outlast Trump—abided by its obligations for a year, during which the topic fell out of the consciousness of most of the public and most members of Congress. Now, with Iranian leaders saying their patience is exhausted and talking about exceeding the limits of the JCPOA if the agreed-upon economic benefits do not materialize, it sounds to some inattentive ears as if the Iranians are instigating a nuclear crisis. In short, the patience of the Iranians has worked against them as far as image and messaging are concerned.

Fourth and probably most influential have been the Trump administration’s hints about supposed new threat information, accompanied by deployments of military resources and other U.S. saber-rattling. Details about any immediate new threats have been slow in coming, and the British general who is deputy commander of the anti-ISIS coalition debunked to reporters the idea that whatever Iran and its militia allies are doing represents a new and elevated threat. The Trump administration quickly tried to play down the general’s comments, and its talk about supposed new threats will continue to shape the discourse.

Persuasive details about new threats may never come, but they aren’t necessary for the administration to have the desired effect on public attitudes about Iran. That gets to the fifth reason, which is that the rhetorical drumbeat about Iran as a threat—even bereft of any threat information—shapes attitudes. It is worth remembering that the George W. Bush administration got a large proportion of the American public to believe that Saddam Hussein’s regime had been directly involved in 9/11. The administration induced that belief not so much through specific lies as through a rhetorical drumbeat in which “Iraq,” “9/11,” and “WMD” were constantly spoken in the same breath. Something similar is happening today.

The sixth reason gets to real, not just imagined, Iranian actions. The Iranians currently face an unmistakable threat of military attack by the United States. They hear a heavy stream of hostile rhetoric from Washington, see the U.S. military deployments in their backyard, and realize that people in positions of power in the Trump administration would welcome war with Iran. It is unsurprising and prudent for the Iranians to brace for a U.S. attack and to prepare to respond to it. Indeed, it would be irresponsible, from the standpoint of Iranian security, not to prepare for it. Such preparations may include “targeting” U.S. assets in the sense of planning what to try to hit in response to any U.S. attack. The preparations do not indicate any Iranian intention to initiate hostilities, but information gathered about them gets fed into the U.S. discourse as supposed “threat information.”

The seventh reason is less certain than the rest and involves the possibility of Iran initiating some minor actions, if only to send a message that it cannot be kicked around forever amid the U.S. hostility and pressure. A variation on this possibility, which Trita Parsi raises, is that Iran may practice some of its own brinksmanship to play upon Donald Trump’s desire not to get immersed in a new Middle East war. Tehran’s plan may be “to accelerate matters toward the point at which Trump will have to decide whether he is truly willing to go to war with Iran or if the strategy of ‘maximum pressure’ will not cross that threshold.” Some reporting from Washington suggests the Iranians have material to work with in the form of Trump being frustrated with the war-seeking John Bolton. For Trump to reclaim control over policy toward Iran may right now be the best, however unreliable, hope for keeping the current mess from escalating into war.